Hornets drop to 0-3 in the Big Sky 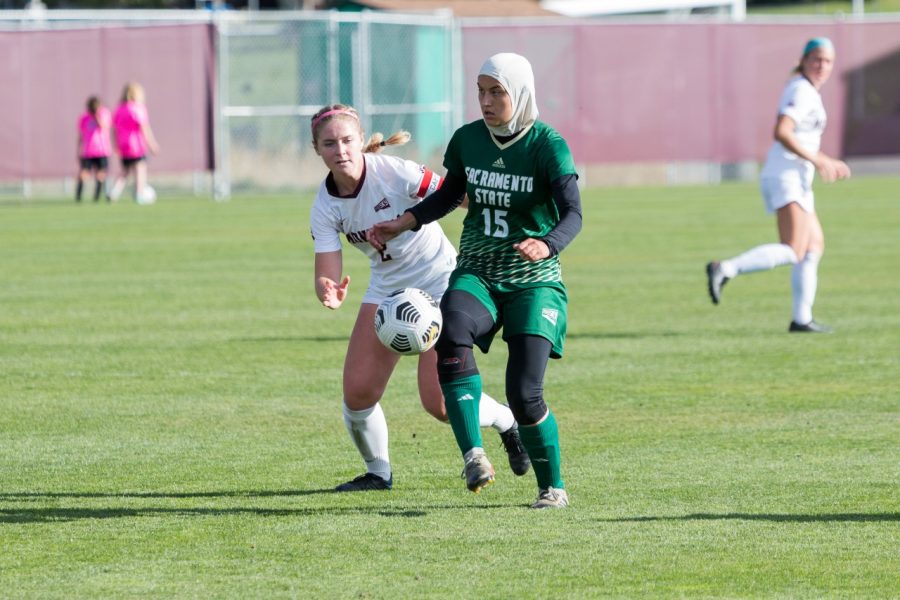 Sacramento State freshman forward Danna Restom fighting for possession against the defense Friday, Oct. 1, 2021, at South Campus Stadium. The Hornets were defeated by Northern Colorado 2-0 on Sunday as they fell to 0-3 in conference play.

Sac State women’s soccer is winless in the Big Sky after a brutal 2-0 loss to Northern Colorado.

This match saw an even back and forth to open things up with each team trading possessions and shots within their schemes.

But things soon took a turn when Northern Colorado’s defense started turning up the pressure and flipped their aggression into offense, attacking Sac State at every chance they had.

The Bears outshot the Hornets 5-4 and also drew nine first-half fouls to Sac State’s three, putting a lot of pressure on the Hornets’ defense to keep up with the tempo.

The second half saw more of the same dynamic with Northern Colorado continually using a positive ball to force Sac State to  react to a set play.

“We were reacting more than being proactive,” freshman forward Abby Lopez said. “I believe that offensively and defensively we have room to grow, we win as a team and lose as a team.”

This style of play for Northern Colorado came to fruition when in the 47th minute, UNC senior midfielder Haley O’Nan drove the ball upfield and scored, putting Sac State in a hole they never climbed out of.

On top of the defense struggling, the Sac State offense never found a consistent rhythm throughout the entire match.

There were some moments, including a left-sided shot from senior forward Ele Avery, that just missed the mark. The collective unit couldn’t find a spark.

Sac State’s first corner wasn’t until 14 minutes in the second half, signaling an almost nonexistent level of assertiveness from the Hornet offense.

Northern Colorado would score another goal late at the 86th-minute mark with  another deep drive from their forward unit.

“We have a lot of potential and are just struggling to bring all our talent together,” junior goalkeeper Katie Price said. “Obviously [the team lost] this weekend so it puts more pressure on our next games.”

For a Sac State team that is 0-3 in the Big Sky after opening conference play with a three game road trip, returning to home field will present an opportunity for the Hornets to get back on track.

“With our first 3 conference games on the road our girls are looking forward to getting back to the comfort of our home field,” head coach Randy Dedini said.  “Traveling in the Big Sky is tough and being able to sleep in their own beds and having their normal routine will be a nice change.”

Sac State’s next match will be at home Friday, Oct. 8 against Idaho at 4 p.m. at Hornet Field.