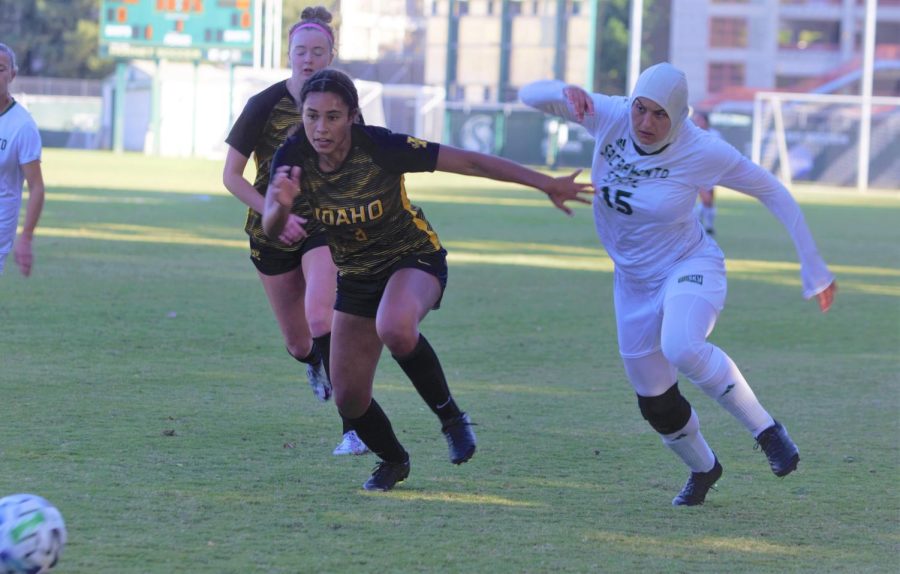 Freshman forward Danna Restom battling with an Idaho defender Friday, Oct. 8, 2021 at Hornet Field. The Hornets defeated the Idaho Vandals Friday for their first Big Sky win of the season.

It was a chilling 65 degrees Friday evening at Hornet Soccer Field that saw very calm winds, but for the Sacramento State women’s soccer team, a not so calm ending to the team’s first win in the Big Sky, beating the Idaho Vandals 2-1.

“After going 0-3, it was pretty hard, especially knowing the talented players that we have, but we’ve stuck together,” head coach Randy Dedini said.

The match opened with a slugfest that saw the Hornets and Vandals trade off a few shots early.

Success on offense came for the Hornets late in the first half when senior forward Ele Avery drove through the backline of the Vandal defense.

On top of capitalizing off of their scoring opportunities, the Sac State defense played off of the momentum the offensive unit served up. Going into halftime, Sac State held Idaho to zero points on five shots.

The Hornets for the first time in close to a month, have a lead going into the halftime break. @SH_Sports

For a Sac State team that has allowed the fourth most goals in the Big Sky, to hold the fourth ranked team in the conference in the Vandals to zero points in the first half, along with putting themselves ahead early brought upon a recipe for success.

“We came out with a new game plan [and] new formation because we know it sometimes seems a little susceptible to stuff,” senior midfielder Shay Valenzano said.

The move though unexpected, proved to be beneficial as Shalit shined in her first career start,  finishing with four saves, including a stellar full body dive to deflect a shot.

“I’m really proud of my team. I honestly couldn’t have done it without all of them,” Shalit said. “I just [remember] keeping my head in the game and even when I was on the bench,  I was always engaged with my players, making sure that they knew I was there for them so hopefully when it comes time, vice versa would be the same thing.”

In the second half, Sac State was met with adversity, something this 8-loss team knows plenty about. At the 62nd minute mark,  Vandal senior midfielder Savannah Foster scored a goal after a corner cross that put the ball in the middle of the field.

With their backs against the wall and their first Big Sky win on the line, the Hornets had to pull off some late-game magic to escape with a win and avoid going into extra time with an Idaho team that has the best overall record in the conference.

And they did just that.

With nine minutes left in the match, Valenzano stepped up to the plate for her team and delivered a clutch, game-winning goal off of a flashy assist from sophomore forward Jasmyne Dunn, securing a 2-1 win for the team.

“I think it was just kind of like textbook play,” Valenzano said. “I’m usually open at the top of the box and Jasmyne just found a pocket of space and she found me and I took a touch, I didn’t even look up, I just kind of cracked one.”

For the Hornets to not only get their first win in over a month, but to do it against arguably the best team in the conference left a lasting sense of confidence in the locker room.

“It at least gives us a chance to get back into the race,” Dedini said. “We know the talent that we have and the girls put out maybe the best performance of the year for us on the field.”

The Hornets next match will be another home game on Sunday, Oct. 10, 2021 against Eastern Washington at 1 p.m PST and can be watched on ESPN+.