Hornets remain winless on the road and in Big Sky 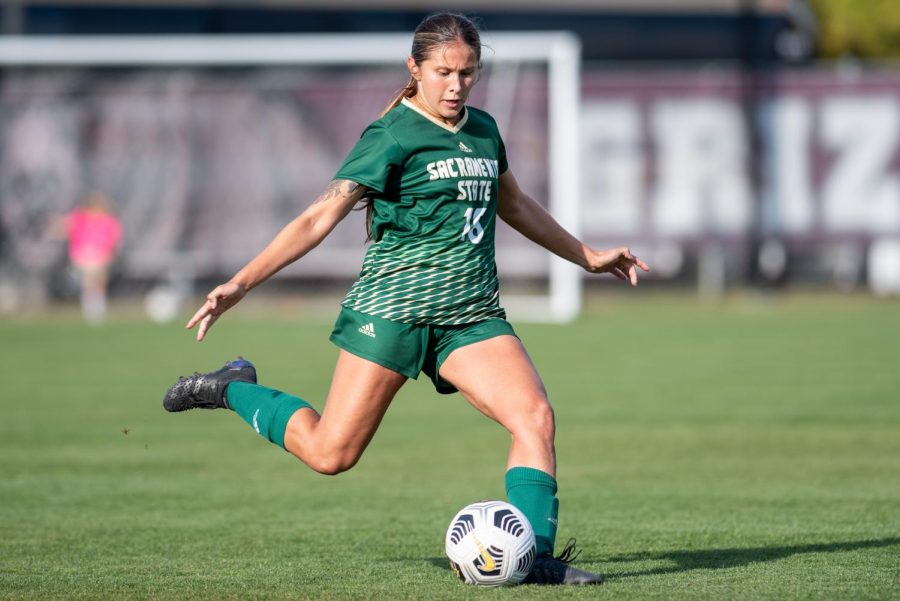 Senior midfielder Julia Herrera (16) attempts a clearance in the middle of the field on Friday, Oct. 1, 2021, at South Campus Stadium. The Hornets were defeated by the Grizzlies 1-0 and fell to 0-2 in the Big Sky.

That was the last time the Sac State women’s soccer team defeated the University of Montana. Since then the Hornets (1-7-2, 0-2 Big Sky) have been winless in matchups with the Grizzlies (7-4, 3-0 Big Sky), and after their 1-0 loss today, it is now one of the highest active opponent losing streaks in the Big Sky.

The streak lives on.

The Hornets looked decent early on against the reigning Big Sky champions, trading off multiple shots with the team to begin the match. However, everything soon came crashing down.

To open the match, the Sac State forward and middle fielder tandem of Danna Restom and Lexi Rakela were cooking it up early in the first half, having a combined three shots between the both of them within the first 15 minutes.

“I think we’re getting better offensively as we switch how we want to play,” said head coach Randy Dedini. “We just gotta get over that edge.”

Despite the Hornets creating opportunities for themselves, they struggled to capitalize off of them, which has been a theme in this 1-win season and something that Montana took full advantage of.

Just as it seemed both teams were going into the halftime break at a 0-0 score, Montana received a corner kick possession after a drive. With a corner cross, the Grizzlies scored in the 37th minute after the direction of the cross drove Katie Price out of the goalie box, leaving the goal wide open for redshirt senior defender Caitlin Rogers to score.

“It has definitely been frustrating not being able to finish our opportunities,” freshman forward Sedona Robinson said. “This game was very even with shots on goal and we had one bad miscommunication in the box, for them to get their goal, it’s frustrating for sure.”

Sac State came out in the second half playing with their backs against the wall, trying to even the score, logging in five shots. However, Sac State could not find the right moment or play to put points on the board.

The Hornets did find one opportunity late with a foul free kick in the 83rd minute for senior defender Aubrey Goodwill just outside the penalty box.

“We were able to hold them off but not able to capitalize,” senior forward Ele Avery said. “We played good soccer with one another and are proud of our performance, it only hurts that we didn’t get the result to show.”

Though Goodwill shot a sharp strike to the right side of the goal, it was saved by redshirt freshman goalkeeper Camellia Xu .

Sac State, now winless in the Big Sky and on the road this season, is looking for a newfound approach.

“I mean, we’re so freaking close,” Dedini said. “It’s just put away our chances and not conceding goals.”

The Hornets next match will be on the road Sunday, Oct. 3 against the University of Northern Colorado at 11 a.m and can be streamed here.