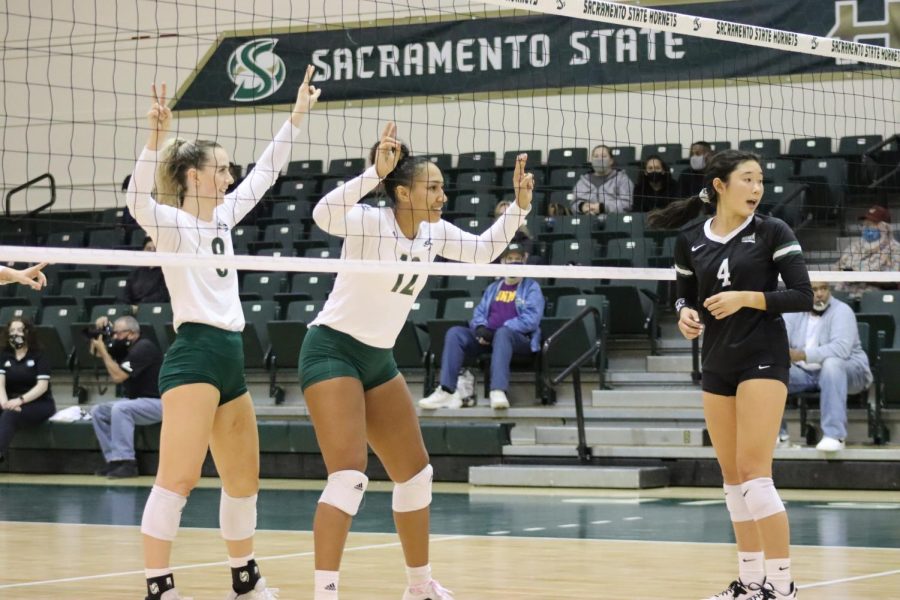 The Hornet’s Nest at Sacramento State echoed with cheers during a three-set sweep as the volleyball team beat Portland State (7-1) by a score of 3-0 on Tuesday.

The Hornets returned home after losing back-to-back games in a Montana road swing.

“We were really listening to each other,” said senior middle blocker Cianna Andrews. “Our goal tonight was to make a statement, and I feel that the statement was made.”

The first set began with Sacramento looking strong. The Hornets were able to play solid defense against Portland State and hold the lead for the majority of the set.

Sophomore middle blocker Kalani Hayes and sophomore outside hitter Bridgette Smith combined for nine kills in the first. Portland State struggled with seven errors through the set, and the Hornets were able to take advantage of the miscues, taking set number one by a score of 25-13.

The second set was much closer than the first.

The Hornets struggled to start with the rhythm they had in the first set. Portland State seemed to have adjusted but fell in a comeback when the Hornets got things rolling. The set went to the Hornets 25-21.

There were six ties in the set and two lead changes. The Hornets’ offense was able to make things happen and had 15 kills in the set to Portland State’s 10.

Sac State’s offense was consistent throughout the night with many players contributing to the stat sheet. They continued their hot streak and played their best set of the match in the third.

“We’ve gone through a rough patch these past couple weeks,” Hayes said. “We did a lot of talking and reflecting, and tonight felt so good.”

Sac State limited errors and challenged everything at the net in the last set. The Hornets had four blocks in the third.

Portland State struggled with Sac State’s authoritative front line getting blocked at the net on multiple occasions throughout the match.

“This is the best we’ve played a complete match all year, ” said head coach Ruben Volta. “It’s about making it a repeat effort and making this the standard of how we want to compete.”

The Hornets will now play four more home games before getting back on the road. The win puts the team at a 4-5 record in the Big Sky Conference and a 9-10 overall record.

Sac State returns to competition in their next match at home against Northern Colorado at 7 p.m. on Thursday.