Home victory is currently second in a row 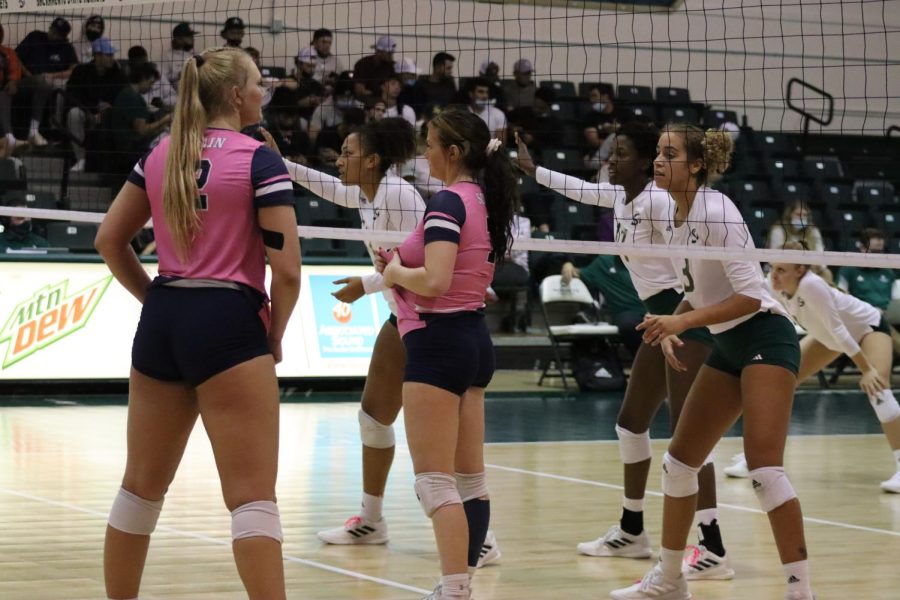 A sweep against  the No. 2 seed in Big Sky, Northern Colorado (7-1), earned Sacramento State volleyball their second consecutive win at home on Thursday.

“We plan to go 3-0 this week,” said senior outside hitter Macey Hayden. “We’re all on the same page and working really hard.”

The Hornets came into the match with a 4-5 record sitting at sixth place in the Big Sky Conference and by the end of the night evened their record to 5-5. They remain at sixth, but this still allows the team to make it to the playoffs.

The Hornets were able to sweep the visiting Bears by staying consistent with effort and energy.

“We’re confident in ourselves, and we know we have a good team,” said head coach Ruben Volta. “We played so consistent and we played hard, so I’m really happy.”

The Hornets began the first set trying to build off their last win. Their performance began with an ace for the point to get the match started. They played a solid set while Northern Colorado made them work for every point.

There were eight ties and four lead changes in the set, but Sac State was able to finish it out 25-23.

Northern Colorado was on a six-point scoring run before Sac State clinched the set point and barely survived the Bear rally.

Hornet outside hitters, sophomore Bridgette Smith and Hayden, each had five kills in the first. The Hornets held Northern Colorado to a .297 hit percentage while maintaining a .500 hit percentage of their own in the set.

Northern Colorado took the lead at the beginning of the second set, but the back-and-forth intensity continued.

In the second the score was tied on 16 different occasions, and there were nine lead changes.

The Bears’ front line played strong offensively, but the Hornets’ defense was able to hold on as they won the second set 25-21.

The Bears continued to make it tough for the Hornets in the third set, but the Hornets were able to clinch it 25-22.

Five Hornet players put up seven kills each in the match, and the team finished with 48 total kills and 59 digs. Sac State limited Northern Colorado’s hitting percentage to .150 throughout the match.

Smith and Hayden combined for nearly half of Sac State’s kills in the match with 23 total.

“We’re dangerous when you give us the chance,” Hayden said. “The Big Sky better watch out.”

Northern Colorado had 36 kills in the match. The Bears were led by junior outside hitter Rachel Hickman, who had nine kills and one dig in the match, and sophomore middle blocker Lauren Strain who had eight kills and three digs.

The Hornets will attempt their third win in a row in their next game. They will face Boise State in the Hornets Nest at 12 p.m. on Saturday.