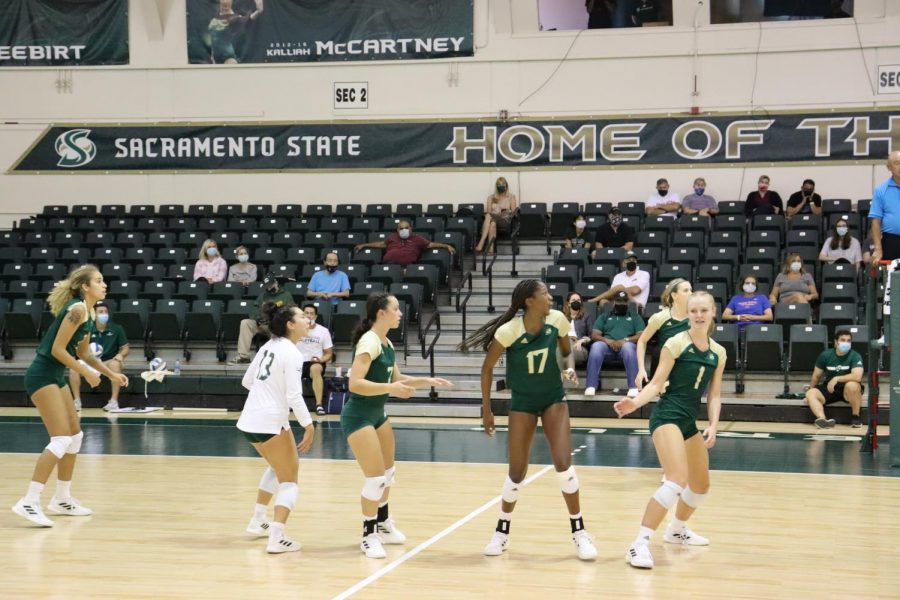 The Sacramento State women’s volleyball team plays against CSU Northridge in the Sacramento State invitational tournament on Sept. 10, 2021. The team won their first Big Sky Conference game of the season on the road against Eastern Washington.

The Sacramento State volleyball team (5-6) got their first win in conference play Thursday night against Eastern Washington (5-7), sweeping them in a three set victory.

The Hornets have been on the road for five games and came into the match looking for their first victory in the Big Sky Conference after a loss against Idaho last week.

Hornet sophomore outside hitter Bridgette Smith came into the match leading the team with 18 aces so far this season.

They also came into the match leading the Big Sky Conference in blocks, which the front line displayed in the match.

The Hornets, who came into the match leading the Big Sky Conference in blocks, took the first set  25-22.

Middle blocker Cianna Andrews and Smith both had five kills each by the end of the first set. Sac State started the match with both strong defense and offense coming from their front line.

The Hornets ran with the momentum from the first set and won the second 25-20. Eastern Washington matched Sac State with 20 kills, but they were not enough. The home team struggled with giving up too many points by error.

Andrews continued her performance from the first set with an important solo block to shift momentum in the second.  In the third and most dominant set of the game for the Hornets, Eastern Washington could not get it over the block or the front line. Sacramento’s bench was full of smiles while Eastern Washington continued struggling to find rhythm.

Sac State in the third set, had 10 blocks to Eastern Washington’s four blocks. The Hornets finished the match 25-19. T

Sac State’s opposite hitter Karlee Soderberg was able to finish with a career-best performance, posting a .500 hit percentage to go along with eight kills and  five blocks.

Outside hitter Caitlin Volkmann returned after two games of being injured and recorded seven kills. Smith led the team with 11 kills and two points scored by aces. This is the fourth match in the game she has scored double digit figures.

Sac State will play their next match at University of Idaho at 1 p.m. on Saturday.