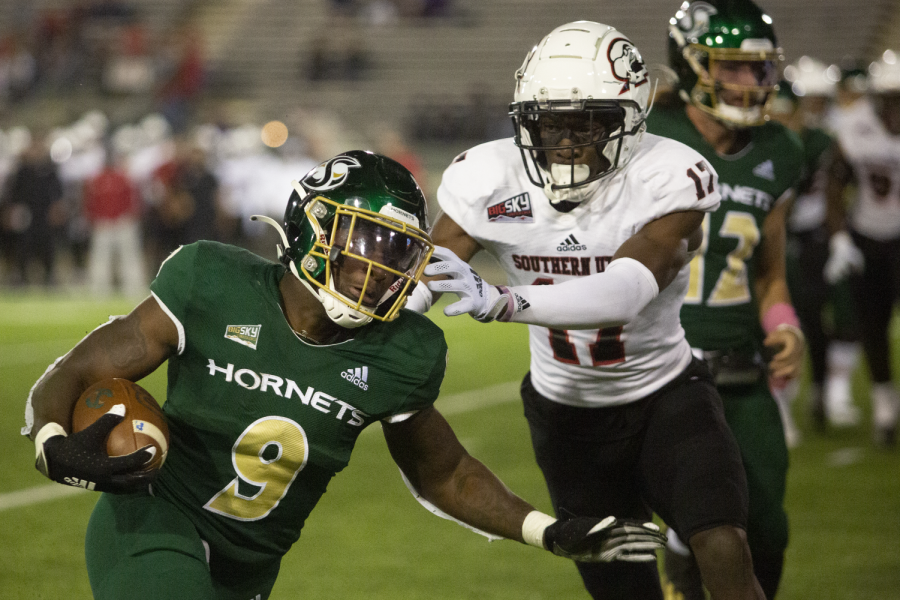 Hornet sophomore running back Marcus Fulcher (9) sheds off a tackle from Southern Utah’s redshirt junior cornerback Alonzo Davis (17) for a first down on Saturday, Oct. 9, 2021, at Hornet Stadium. The Hornets crushed the Southern Utah Thunderbirds 41-20.

Sacramento State proved to be too much for the Thunderbirds on both sides of the ball as they steamrolled their way to a 41-20 victory.

The Hornets were without their starting running back Elijah Dotson who has decided to forego the rest of the season due to personal issues according to head coach Troy Taylor.

“Elijah Dotson unfortunately has decided not to play the rest of the season,” Taylor said. “From what he told me, he has some personal family stuff going on, and he needs to take care of that.”

Even with the absence of Dotson the game plan for Sac State’s (2-2) return home against Southern Utah University (1-4) was simple: run the ball until the opposing team stops it.

The Hornets jumped on Southern Utah early and scored on a 10-yard jet sweep to senior wide receiver Isaiah Gable.

Senior running back BJ Perkinson kicked the door down and set the tone on the second play of the Hornets’ first offensive drive with a 53-yard run that set the Hornets up inside their own 10-yard line.

Taylor described Perkinson’s play as “smooth” and said that they haven’t done a good enough job of getting him the ball in the first four games.

“The thing about BJ is he’s so smooth when he runs with the ball, and he is a great pass protector, a great runner and a great receiver, so you’re talking about a guy that can do all three of those things,” Taylor said. “He’s very smart.”

The Hornets kept feeding Perkinson and Fulcher by pounding the football down the Thunderbirds throat and by the end of the first half the depth of the Hornets backfield would become too much for Southern Utah.

The Thunderbirds had no answers for the Hornets in the first quarter and junior quarterback Asher O’Hara’s athleticism was on full display. O’Hara hurdled a defender in the endzone on a 10-yard touchdown to give the Hornets a 17-0 lead.

Dunniway said that whether it’s him or O’Hara at the helm he feels like they can win a game with either of them in. They know they have two different skill sets but they compliment each other.

“He’s like my evil twin,” Dunniway said in reference to O’Hara. “This dude does some things that makes my jaw drop, and it’s really fun to watch. I don’t think either of us came for statistics or anything like that. I think we just want to win, and when you have two guys that are leading the offense that just want to win, I feel like you got a really good shot.”

Three touchdowns were scored by four different Hornets in the first half and what the Hornets lacked on the O-line in previous weeks were challenged by coach Taylor to step it up.

“We really just challenged our offensive line to play better and play more consistently because we knew that they were a good group and the backs are fantastic,” Taylor said.

Dunniway followed up by saying that the O-line played amazing.

“I don’t think I got hit a single time,” Dunniway said. “As a quarterback you feel like you didn’t even play, almost like a practice feeling. It’s like I’m still wearing a red jersey which is nice.”

Both quarterbacks got on the board with Dunniway scoring on a connection to freshman wide receiver Devin Gandy and two touchdowns scored on the ground by Gable and O’Hara. The Hornet secondary came to play, earning an interception for their third consecutive week while only allowing one touchdown in the first half of play.

Early in the third quarter the Thunderbirds moved the ball inside of the Hornets 20-yard line on a 51-yard drive led by their redshirt sophomore quarterback Justin Miller, but junior nickelback Marte Mapu displayed a bend-but-don’t-break mentality by intercepting a pass that would lead to O’Hara’s second touchdown of the game.

Mapu was a thief in the night for the Hornet defense.

Just when things were getting out of hand for the Thunderbirds, Mapu intercepted his second pass of the game.

The Hornets kept building off of the defense’s momentum and capitalized on a 10-yard strike from Dunniway to junior wide receiver Pierre Willams on a game-sealing touchdown.

The Hornets look to build off of this momentum when they hit the road next week to play against the 4-1 University of Montana on Oct. 16 at 12 p.m..