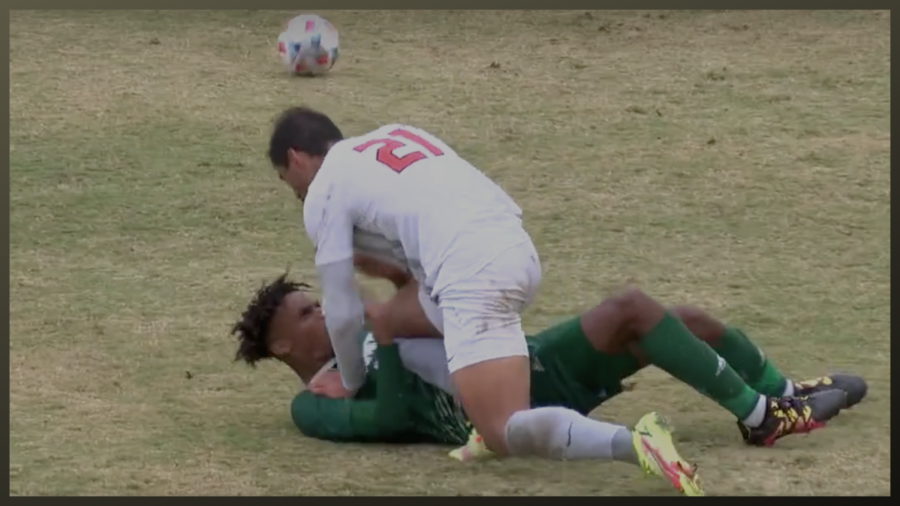 It was a gloomy Saturday afternoon in Sacramento with two teams battling to stay in contention for the Big West postseason tournament. With playoffs on the line, tempers flared and Sacramento State’s men’s soccer team broke out in a brawl with CSU Fullerton.

Luckily for the Hornets, they were able to outlast the Titans with a very physical 3-1 win to vault them into the sixth seed in the Big West with just one conference match left.

The Hornets struck first early on when sophomore forward Michael Gonzalez netted his team-leading fourth goal of the season in the seventh minute as Sac State got out to a 1-0 lead.

The Titans were able to even the game before halftime when Fullerton’s sophomore forward Samuel Owusu, found the game-tying goal in the 31st minute.

The Hornets then found the lead when junior defender Alejandro Alcantara scored his first goal of the season, which happened to be one of the biggest goals for the Hornets so far this year, giving the Hornets the lead with less than twenty minutes remaining in the vital match jockeying for postseason positioning.

Shortly thereafter in the 82nd minute, the game took a turn for the worse after a physical play on the sideline.

The Titans’ junior defender Edward Salazar let out his frustration after Hornets’ sophomore forward Titus Washington and himself both went for the ball.

Washington tripped over the ball and fell to the ground on his stomach and rolled to his back. Salazar fell next to Washington, climbed on top of him and began to repeatedly swing his fists.

“I was just on the ground and s—, before that it was pretty physical and we both went for the ball and he ended up like on top of me,” Washington said. “Then he started swinging and s—. I mean I was just laying there.”

The Hornet bench then erupted and ended the scuffle, which resulted in Salazar being ejected from the match.

When the fight ended, players on both sides kept the same energy for the remainder of the match. After the match and during the handshake line, the teams once again had to be separated.

“It was an unfortunate incident,” said head coach Michael Linenberger. “Overall I felt we reacted pretty well to it and were able to settle down and compose ourselves.”

Iradukunda was given a penalty kick, and he connected to ice the game in the 89th minute to extend the lead to 3-1.

Junior goalkeeper Ryan Curtis had a better performance after a rough outing on Wednesday against UC Santa Barbara.

Curtis had three saves while allowing one goal, including stopping a missile in the 86th minute that could have tied the game. Curtis showed off his hands from his time as a high school football wide receiver catching a rocket off the foot of Fullerton’s senior midfielder Zach Gowlett.

Saturday was also Senior Day for the Hornets, and they celebrated the careers of six Hornets with the crowd before the game in the group’s last home game at Hornet Field.

Senior defender Tyler Moss leads the team in assists this year with six.

“I come here for soccer,” Moss said. “It’s like my job to give all I can every game, anything less than that would be failing myself, my coaches and my teammates. That’s what it is, it’s a brotherhood and seeing that over five years, if I gave anything less than 100% I’d be disappointed in myself.”

The Hornets now control their own destiny for making the Big West Tournament as they face off against UC Davis next Saturday in Davis for the conclusion of Big West play. A win over Davis clinches a berth to the tournament for Sac State, while a tie or loss will leave the Hornets needing help from other teams to make the postseason.

“Always a must-win against Davis, you know cross-town rivalry? Big, big deal, it’s always a good game, a good battle,” Washington said. “I think with everything on the line, we’ll get it done.”