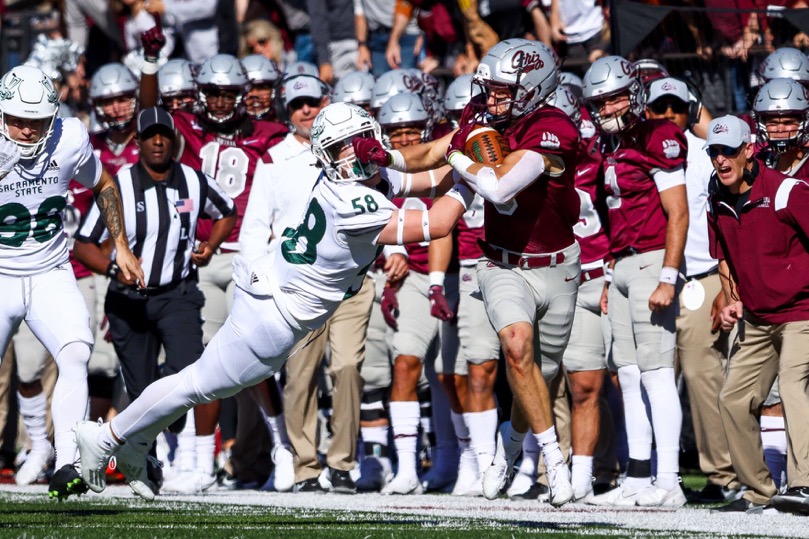 Sac State freshman linebacker Mitchell Wolfe (58) gets stiff-armed as he attempts to tackle Montana sophomore safety Garrett Graves (5) on Oct. 16, 2021, at Washington-Grizzly Stadium. The Hornets pulled off the upset and beat the #5 ranked Grizzlies for the first time in Missoula by a score of 28-21.

The crowd was electric and filled with red in Missoula, Montana for an anticipated showdown between Sacramento State football and the University of Montana.

Head coach Troy Taylor is now 7-0 on the road against Big Sky opponents since starting his stint at Sac State as they won this game 28-21. In order for his streak to stay alive, the Hornets had to do something they’ve never done: win on the road in Montana.

“Our team is resilient,” Taylor said. “Obviously a difficult place to play, it wasn’t overstated. People talk about this place and the energy, and the fans, and they were in it the whole game.”

The Hornets were 0-12 all time when facing the Grizzlies on the road, but the last time these two teams faced off in 2019 the Hornets came out on top.

Similar to their victory against the Grizzlies two years ago, the game plan for the Hornet offense was to jump out to a fast start, and as stated by junior quarterback Jake Dunniway “punch them in the mouth.”

It looked like a runaway game for the Hornets after a strip sack by senior defensive line Josiah Erickson put the Hornets in position for Dunniway’s second touchdown of the game putting them up 21-6 at the start of the third quarter.

Taylor’s quarterback duo was in full effect and both quarterbacks got on the board early with Dunniway scoring the first touchdown on a five-yard strike to freshman wide receiver Chris Miller and junior quarterback Asher O’Hara using his legs to soar into the endzone on a two-yard touchdown run.

Taylor said that when it comes down to playing the two quarterbacks “it’s a feel thing,” but what makes it work is “quality of people.” Taylor said.

“They’re really unique guys and quarterbacks are in general very competitive and they don’t like sharing the position,” Taylor said. “These guys are really competitive but they’re such great people. You talk about team oriented and just worried about the team. They cheer for each other, there is never any negative energy in meetings and I can’t overstate how important that is.”

@SacHornetsFB completes the upset and begin to celebrate as sacks by @josiaherickson and Killian Rosko forces a turnover on downs. The Hornets leave with their first victory at @MontanaGrizFB in school history to stay undefeated in conference play. @SH_Sports @TheStateHornet

A jolt of energy by the Hornet offense only fed into the energy of their defense as they came up big forcing two stops inside of the red zone.

At halftime both teams made adjustments, but the third quarter started off with the Hornet defense continuing to apply pressure and the hornet offense being confident enough to know that there was nothing that Montana’s offense could do to stop them.

“Everybody talks about how tough Montana’s defense can be and rightfully so,” Dunniway said. “They’re a great defense, very talented but I feel like if we run our offense it doesn’t matter who we’re playing, I feel like we can move the ball.”

Redshirt freshman quarterback Kris Brown led the Grizzlies to their first scoring drive of the game scoring on a two-yard run and followed up with a 23-yard rushing touchdown that would tie the game.

The momentum seemed to be swinging in the direction of the Grizzlies, but Sac State continued trusting its offense, and it worked out in the team’s favor as Dunniway connected with freshman wide receiver Jared Gipson for the second time on a 24-yard bullet to the endzone, putting the Hornets back in the lead 28-21.

It got sloppy toward the end of the third quarter when sophomore running back Marcus Fulcher muffed a punt inside the Hornets 20.

It looked like the tide turned back in Montana’s favor, but one play after the fumble, senior linebacker Marcus Hawkins came up with his second interception of the season.

Hawkins said that every time the defense takes the field the game plan for the defense is to get the ball back to the offense.

“Everybody knows our offense is explosive, as long as we keep giving them the ball they’re going to keep scoring,” Hawkins said.

The Hornets used this opportunity to keep their foot on the gas and milk the clock for the remainder of the fourth quarter.

It came down to the last two minutes of the game and sacks by Erickson and junior defensive line Killian Rosko sealed the game, giving the Hornets their first win at Montana in school history and another week of being undefeated in Big Sky play.

The Hornets come home to Hornet stadium next week “with all the confidence” Hawkins stated for their homecoming game against Northern Arizona as they move on to 4-2 in the season.

“I mean inside the conference and outside the conference like I said we love our offense and I’ll go to war for anybody, all 22 of us,” Hawkins said. “We have tremendous confidence every week and that comes from preparing everyday so when we play the game it’s easy.”