Hornets remain winless on the road this season 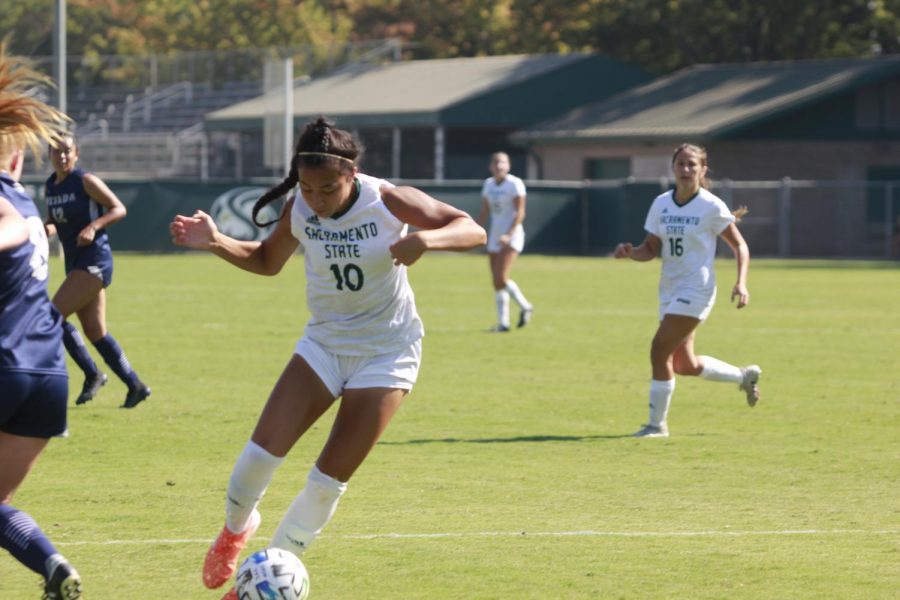 Senior forward Tiffany Miras dribbles through defenders Sunday, Sept. 4, 2021, at Hornet Soccer Field. The Hornets dominated the University of Nevada, Reno Wolfpack in a 3-0 win after coming to life offensively in the second half.

The Sac State women’s soccer team suffered its fourth straight road loss after being defeated by UC Davis 1-0 on Sunday.

The Hornets (1-4-1) did not play Thursday in their scheduled match against UC Berkeley (4-3) due to health and safety concerns and continued on the road to play UC Davis (4-3) in a physical NorCal match up.

The first-half of the match  the Hornets saw a lot of the same issues they faced in last Sunday’s home game against University of Nevada, Reno, except with a drastically different result this time around. A mix of an up-tempo scheme from the Aggies, along with a Sac State team that played many negative balls and stayed back, put the Hornets in a difficult position throughout the match.

Missing their sophomore forward Jasmyne Dunn, who went down in Sunday’s game against Nevada, Sac State showed major signs of stagnation on offense. Dunn has one goal on the season and provides important depth to the Hornet offensive core.

The Hornets saw an instant sense of assertiveness from UC Davis coming out of the gate, as the Aggies had three on-goal shots  within the first 20 minutes of the match.

“Davis came out aggressive [and] they did put us under a lot of pressure which resulted in a lot of turnovers,” freshman forward Sedona Robinson said via text message.

Sac State struggled with keeping possession outside of their half of the field. UC Davis was able to apply major pressure on the Sac State defense by dominating possession within Sac State territory and making plays off of that approach.

Though Sac State did see a lot of pressure from the UC Davis forwards, what kept them alive was the critical play of junior Goalkeeper Katie Price, who had a career-high 10 saves, four in the first half alone.

Despite the stellar play from Price, the Hornet defense could not hold the Aggies for the entirety of the game. At the 35-minute mark, UC Davis made a break-away play from an aired out pass and scored, stunning the Hornets going into halftime.

Coming out of halftime the Hornets  couldn’t get over the hump, though their offense did set up a few opportunities.

Sac State struggled to get anything going against the vigorous UC Davis backline. The team had just three corners and five shots throughout the match.

Sac State could not recover from the 1-0 deficit and went on to lose the match.

“I think the effort was there but we definitely need to capitalize on the opportunities that we do have in front of goal” said Robinson. “We did not win a lot of 50/50 balls or sell out our tackles, touches, crosses, etc. which are important details to create opportunities to get us to goal.”

The Hornets next match will be at home on Friday, Sept. 17, at 4 p.m. against the University of the Pacific.