Hornets earn their first win of the season after defeating Nevada 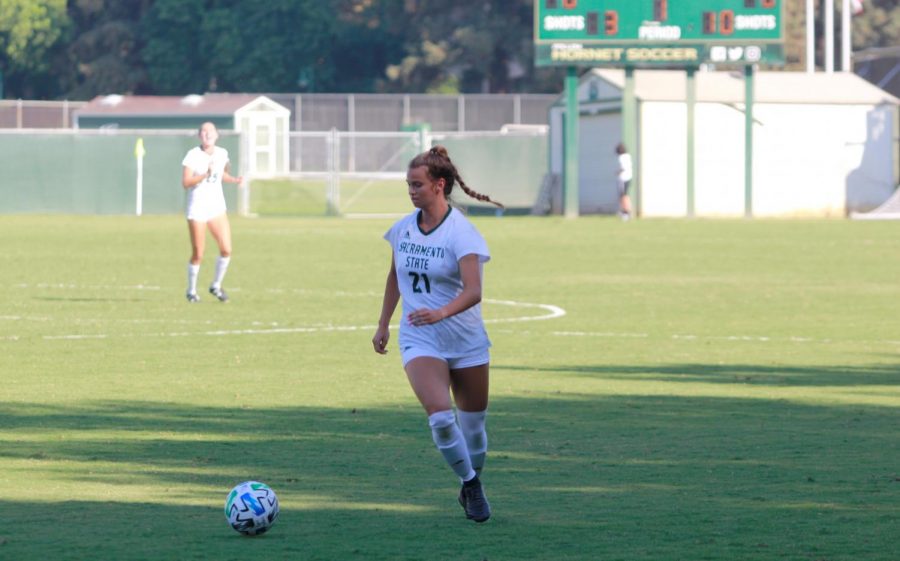 Sacramento State freshman forward Sedona Robinsons dribbles upfield at the Hornet Soccer Field in the second half of the match on Sunday, Sept. 4, 2021. The Hornets beat the Nevada Wolfpack in a 3-0 win after making second half adjustments.

Coming off of three losses and a draw to open the season, the Sacramento State women’s soccer team bounced back with a colossal 3-0 win against the University of Nevada, Reno.

The Hornets (1-3-1) knew they had something to prove against the Wolfpack (1-3) coming into Sunday’s match winless on the season.

Though the score may say otherwise, the Hornets did not have an impressive showing in the first half by any means.

Sac State struggled to contain Nevada’s offense in the first 45 minutes. Their opponents capitalized on their opportunities, but attempted seven on-goal shots within the first 20 minutes of action.

“The first half is always kind of hard because you never know what the team has,” freshman midfielder Abigail Lopez said. “Every team is different.”

Aside from Nevada wearing out their defensive unit, Sac State struggled finding rhythm on offense. The team was able to advance the ball upfield with quick defensive saves, but they had trouble executing when the offense pushed and attacked because of the physicality of Nevada’s defense.

The Hornets attempted only three on-goal shots in the first half.

“We’re still trying to find a rhythm,” said head coach Randy Dedini.“We were playing so many negative balls in the first half, we just had the mindset [going into the second half] that we have to go forward. Going back just slows things down.”

Despite all of Sac State’s struggles in the beginning, the score was 0-0 heading into the locker room at halftime.

The Hornets came out in the second half with a vengeance, meeting Nevada’s aggression every step of the way. After taking just three shots in the first-half, the Hornets got off four shots within the first four minutes of the second half, setting a new tone for the rest of the match.

“At halftime we said ‘You know what? Let’s go forward, have the confidence to hold a player off, and not play back all of the time,’” Dedini said.

The Hornet offense revived itself in the second half. At 64:42, senior midfielder Samatha Craig scored the team’s first goal off of a cross-assist from sophomore forward Jordan Goularte. On the very next play, the Hornets took back possession on a Nevada pass error, leading to another goal from freshman midfielder Abigail Lopez at 64:46, just four seconds later.

“[At halftime] the talk the coaches had for us really put in our head that we don’t work hard just for nothing,” Lopez said. “That’s when we started pushing.”

Sac State’s offensive routing was capped off with a goal at the 71st-minute mark by senior forward Ele Avery with a soft-assist from Lopez, awarding the Hornets a 3-0 victory.

Sac State’s next match will be against University of California, Berkeley on Thursday, Sept. 9 at 4 p.m.