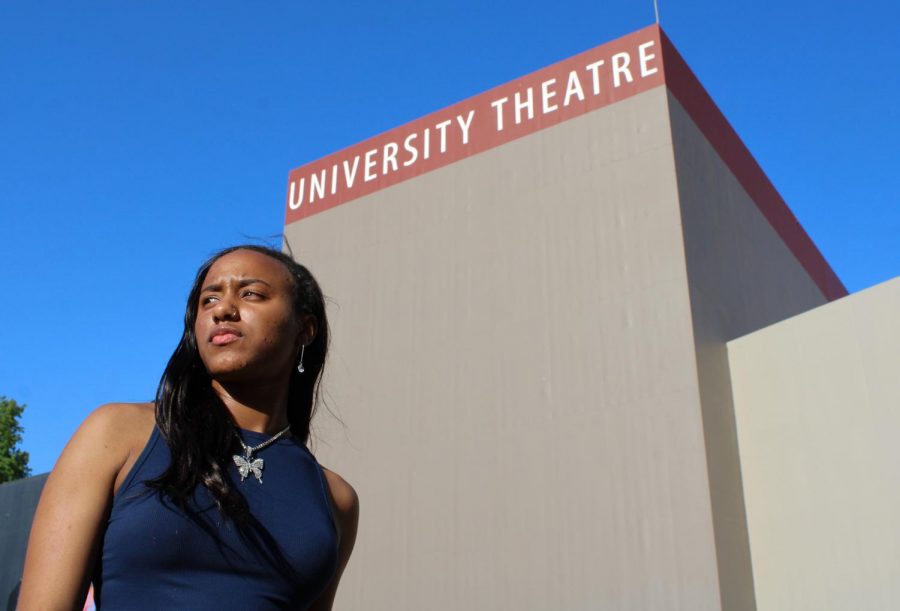 Aladria Brown stands outside of the university theater on Saturday, May 8, 2021. As ASI’s next director of arts and letters, she plans to collaborate with all departments and bring new ideas to Sac State.

Thirteen months after the theatre and dance department was confronted by students regarding systemic racism, theatre students at Sacramento State are reflecting on the past, recounting recent events and calling for change within the department.

As a result, students and faculty met over the summer in 2020 as a part of Black Engaged Fundamental Racial Equity Everyday or BE FREE, a series of meetings where students, faculty and alumni push for anti-racism within theatre and dance.

Last August, students and alumni spoke out against racism they experienced from professors in the department. In particular, a Filipino-American alumna from 2018 was mistreated by professors as she sought to get a  musical theatre unit transferred from Oxford Brookes University.

Miles Meckling, a 22-year-old theatre alumni who graduated this spring, is one of the founders of BE FREE. He reflects on his experience with the theatre department saying the department needs to prioritize anti-racist actions.

For example, he said there needs to be implementation of mandatory anti-racist and anti-discrimination training, as well as anti-discriminatory clauses in faculty evaluations. Additionally, he added that the department should hire qualified faculty of color. Currently, the theatre and dance faculty is 65% white according to Sac State’s Faculty and Staff page.

“We have this call to the department and the university to stop functioning in a performative manner,” Meckling said. “We’re calling on you to hire and bring in qualified, diverse employees to help represent all of the students and the dynamic makeup of California.”

The theatre and dance department announced they have chosen an assistant professor for a race in set design, technology and scenography course, according to an email sent to theatre students on May 13. The department has chosen Professor Stephen Jones who was previously an assistant professor of theatrical design and director of theatre at Vassar College in New York.

The theatre and dance department’s Facebook page stated Jones’s job is centered on “antiracism and the role of designers as purveyors of cultural representation and material practices.”

Meckling said that after seeing the job title, students felt it made little sense and seemed as if the word “race” was being used to check a box.

Meckling also said that the hiring policy at Sac State is a problem. According to him, only faculty members who have been at the university for a certain amount of time with a specific status are allowed to participate on hiring committees.

Lorelei Bayne, chair of theatre and dance, said search committees consist of the department chair and at least four full-time tenured or probationary faculty members including faculty members who are a part of the Faculty Early Retirement Program. Within this line-up, the committee selects a chair for the hiring committee.

The department then appoints a Affirmative Action and Equal Opportunity Representative who is tenured or probationary and will also serve as voting member as stated in the department’s faculty recruitment guide.

This leaves out adjunct faculty who are predominantly people of color. As a result, these faculty members are not on these committees, he said.

“In that policy, it automatically sets specifically people of color for failure because they’re not at the top,” Meckling said. “So [faculty members of color] are not on these committees.”

Meckling was also a founder of Student Performing Artists Creating Equity (SPACE), which was composed of only students and facilitated by the department.

Faculty, part-time faculty, community members and alumni were left out according to Meckling because the department wanted a student-only facilitated environment.

Last fall, members of SPACE also wrote to the department with a list of five demands which included the two permanent student ambassadors, student involvement in all technical meetings for every Sac State production, a student voice in selecting adjunct faculty and a SPACE representative included in discussions for spring 2021 productions.

In response, the department asked SPACE to introduce themselves in an upcoming meeting, and regarding the list of demands the department said “based on the content we are not able to fully respond at this time.”

Members of SPACE were unable to meet at the proposed time of 3 p.m. due to class conflicts, so the group rescheduled with the department since there was a later meeting that day, Meckling explained. SPACE was first sent the wrong Zoom link to the meeting and when later sent the correct link, sat in a waiting room for 40 minutes. The next meeting where SPACE was presented, students sat in a waiting room for 15 to 20 minutes, according to Meckling.

He said students were often not treated as student representatives and their voices were dismissed.

One of the productions suggested was called “Working,” which SPACE stated features a “multi-ethnic ensemble” and is one of the “most accessible, relevant, and substantive musicals ever created.”

However, according to Meckling, the production of “Working” suffered because of the department’s “multiple occasions of neglect.” As a part of “Working,” he said cast members were “mistreated” and actors were “left in the dark.”

Members of the cast brought up concerns like the production preparation and lack of community and leadership. These concerns were sent to department in an email in February 2021, three weeks into production.

Outside student groups and initiatives, students reflect on being a theatre student post summer 2020. Looking back, Aladria Brown, a 20-year-old theatre major, said the events over last summer were egregious and disgusting.

Brown is the newly elected director of the College of Arts & Letters for Sac State’s   Associated Students, Inc,. Moving forward, she hopes to work with the theatre and dance department to stand against racism.

“I feel like the theatre department has a long way to go,” Brown said. “But I am definitely completely invested in making things better.”

Hannah Rebanos, a 20-year-old theatre major, transferred to Sac State from Hartnell College in fall 2020. While at Hartnell, Rebanos said she faced microaggressions for being an Asian woman. Now, at Sac State, she feels safer.

But, in order to continue maintaining the safe space she has been in so far, Rebanos said the department needs to continue to talk about racism.

“One thing that’s important to realize is that some people need to notice that their ignorance is what helps racism continue,” she said. “Until they get over that, then they can’t help their students feel safe.”

While Rebanos’ experience at Sac State has been positive so far, she believes the department should continue to implement multicultural studies and have more anti-racism lectures within the curriculum, not just because of the altercations that were brought up in the summer.

“Not only should it be reserved for those classes that specifically say multicultural or Black history,” Rebanos said. “I think if it’s implemented in every subject, then I feel like that’s one way that they can continue to be inclusive.”

Patience Brown, a 20-year-old dance minor, said that as an African-American student, racism is always a “touchy subject.” But, in her African and Caribbean dance class, conversations about race centered around the George Floyd case and Breonna Taylor trials were discussed.

“It’s been hidden, but now it’s being brought to light that racism is something that people don’t think it’s still there but it is,” Brown said. “People just knew how to hide it better. But now as we’re coming forward, people need to be held accountable because this is not okay.”

Brown also mentioned how in her dance classes, there is a safe space to talk about race and racism. Rather, in her general education courses, those discussions are not happening.

Overall, Brown says she would like to see more faculty that look like her and other students of color not just in dance but at Sac State.

Alongside BE FREE and SPACE, the theatre department also has the Communities of Color Collective (CCC), a group primarily consisting of adjunct faculty members that hold meetings  focusing on anti-racist planning and action.

Dance lecturer Nicole Manker, who leads the collective, said CCC started to propose a revisement for the mission, purpose and goals for the department.

“If there’s going to be any sort of real sustainability that exists, in any way where the department’s not constantly struggling to find students, we’ve got to stop being racist,” Manker said.

Nhan Ho is an adjunct lecturer of dance and a member of CCC. He said CCC provides a safe space for students to navigate through if they don’t feel comfortable going to the department.

“We’re here as adjunct faculty members to help and assist the students,” he said.

According to Brian Blomster, director of news and communications at Sac State, the university continues to “share the goal” of ending systemic racism. Yet, President Robert Nelsen, Dean of Arts and Letters Sheree Meyer and other administrators stopped attending BE FREE.

BE FREE was never made mandatory, stated Blomster, as the College of Arts & Letters never called the meetings because they were conducted over summer.

“We continue to be committed to listening from BE FREE and working towards concrete, lasting solutions and would welcome the opportunity to do so,” Blomster wrote in an email to The State Hornet.

As Meckling is now a graduate, he hopes the theatre and dance department not only proceeds with anti-racist initatives, but becomes the family it claims to be.

“I want it to actually be the family where everyone is taken care of, listened to, heard and taken seriously,” he said. “Because when you truly love your family, you take care of them.”