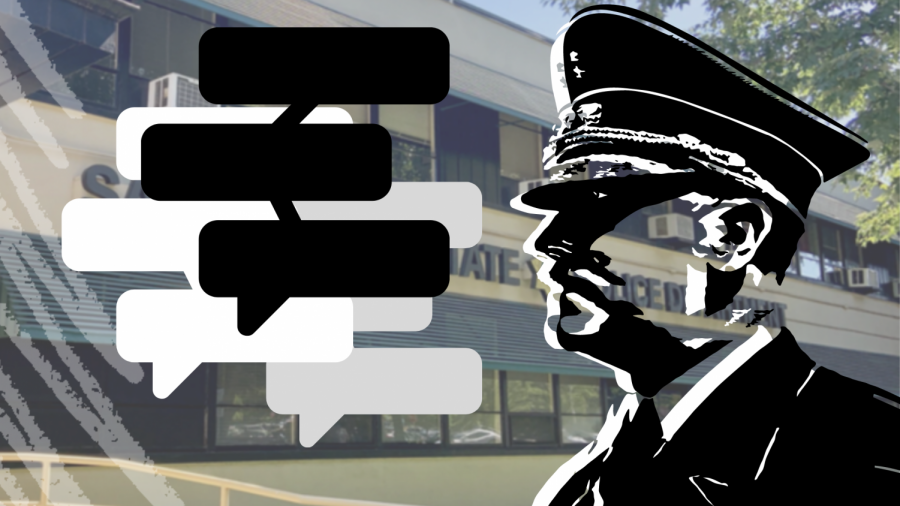 Students and organizations at Sacramento State have their own ideas about how the campus’ new police chief Chet Madison and campus police as a whole could work best to serve the community. Freshman Ryan Sorenson, who is majoring in criminal justice, said she thinks the police should focus on preventing sexual harassment and assault on campus. Photo in background taken by Mercy Sosa. Graphic created in Canva by Mercy Sosa.

At the beginning of the fall 2021 semester, former Sacramento County Sheriff’s Office chief deputy Chet Madison, Jr. began as chief of police for Sacramento State. Madison is replacing Mark Iwasa, who held the position for 10 years and announced his retirement in March.

Madison has previously said that the three “core pillars” that lead his actions as chief include protecting the campus and combating racism, building trust with the campus community, and being approachable to both students and faculty.  Students and organizations on campus have their own ideas about how Madison and campus police as a whole could work best to serve the community.

For Sloane Vanciel, a political science major and president of the Sac State College Democrats, a stance of combating racism is an important start, but she said she would prefer to see a stronger and clearer commitment.

“Policing is rooted in racism, built off of slave patrol, and the police chief must recognize this,” Vanciel said. “We must make a transition from enforcing historically discriminatory laws and instead prioritize building a safe campus community.”

Some students voiced hopes that safety on campus would also be improved.

“I think they should look into safety during nighttime on campus,” Kambez Baidar, a senior majoring in biology, said.

Freshman Ryan Sorenson, who is majoring in criminal justice, said she thinks the police should focus on preventing sexual harassment and assault on campus.

“Recently there have been issues I have been hearing about sexual harassment,” Sorenson said. “I have a friend who was sexually assaulted on campus and I would like that to be addressed. I think they should work to make campus safer for females.”

Sorenson said she said she knew a friend who was assaulted but did not provide the name of the person, so The State Hornet could not verify this information.

According to Sac State’s 2021 Annual Security Report, there were nine reported instances of rape on campus, eight of which occured in an on-campus residential area.

Students can report crimes, including sexual assault, to the Sac State Police Department at 916-278-6000. Crimes can also be reported on a voluntary, confidential basis to the anonymous phone line at 916-278-7245.

However, junior and communications major Lawrence Charles said he feels safe on campus as it is already.

“I haven’t noticed too many issues, especially regarding issues involving racism or violence,” Charles said. “I could be wrong, but I haven’t experienced too many. It seems to me that the campus police are doing their job well.”

As Madison works to build trust with the Sac State community, some students say they believe he should prioritize making a concerted outreach effort to the campus community, particularly those in underserved or underrepresented groups like Black or undocumented students.

“I think they should make more opportunities for students to get to know him,” Sorenson said. “I mean, I haven’t seen him on campus, I haven’t heard much about him other than the one article I saw that said he was the new chief of police.”

Baidar suggested Madison take a targeted approach by seeking out groups on campus that represent the many different groups that live at Sac State.

“One thing he could do is try to reach out to the different clubs and organizations around campus and make sure that they have a means of contacting him,” Baidar said.

Some on campus, such as Vanciel, said they believe that building trust with the police on campus will likely be an uphill effort for the new chief.

“Building trust with these communities will not happen overnight,” Vanciel said. “We are constantly tormented with news clips of people becoming victims of police brutality, which is something that is extremely difficult to push out of our minds. The chief needs to recognize that trust may never be earned by targeted groups and yet still work by and for all students across campus.”

Other groups, such as California State University Students for Quality Education, aim for the goal of complete abolition of campus police and believe that the funds spent on the police could be better used on different campus programs, according to their website.

In May, SQE and the California Faculty Association held a May Day Car Caravan protest against campus police funding. According to a previous report by The State Hornet, the budget for the Sac State Police Department in the 2020-2021 school year was around $6.6 million.

Yahaira, a representative from SQE who requested their last name be kept private due to their status as an undocumented student, said they have been in the United States for 19 years and feel police “have failed to provide [them] a sense of safety in this country.”

“As an undocumented student, my intolerance of police began before I even started at Sacramento State,” Yahaira said. “I knew I was scared of the police from my parents’ whispers, but I did not realize how real the fear was until I learned that my information could be sent over to Immigration and Customs Enforcement (ICE) from any interaction I had with police.”

Sac State Police Department’s official policy regarding ICE is that the department “is not an immigration enforcement agency, and the university will not enter into agreements with local law enforcement agencies, or any other federal agency for the enforcement of federal immigration law, unless required by law.”

Yahaira did note Sac State’s policy limiting ICE actions on campus but said that it was not enough. With police still on campus, Yahaira believes the stress will not go away.

“Getting police off campus should be the next thing we do,” Yahaira said. “Undocumented students have three or more classes to worry about, and on a university campus the last thing they should be worried about is their safety.”

Both representatives for the SQE and the College Democrats also shared opinions that defunding the campus police ought to be a goal for the university moving forward, though they disagree on the extent of such measures.

Vanciel said some funding going to campus police should be diverted towards public safety initiatives and campus groups, while the SQE’s website said it believes that the campus police ought to be outright disbanded.

The lack of consensus between the proposed ideas for defunding the campus police leaves some students asking for more clarification.

“I’ve heard people talking about defunding the police, but really I think we need to have a better understanding of what that even means, what the plan for that would even be,” Charles said.