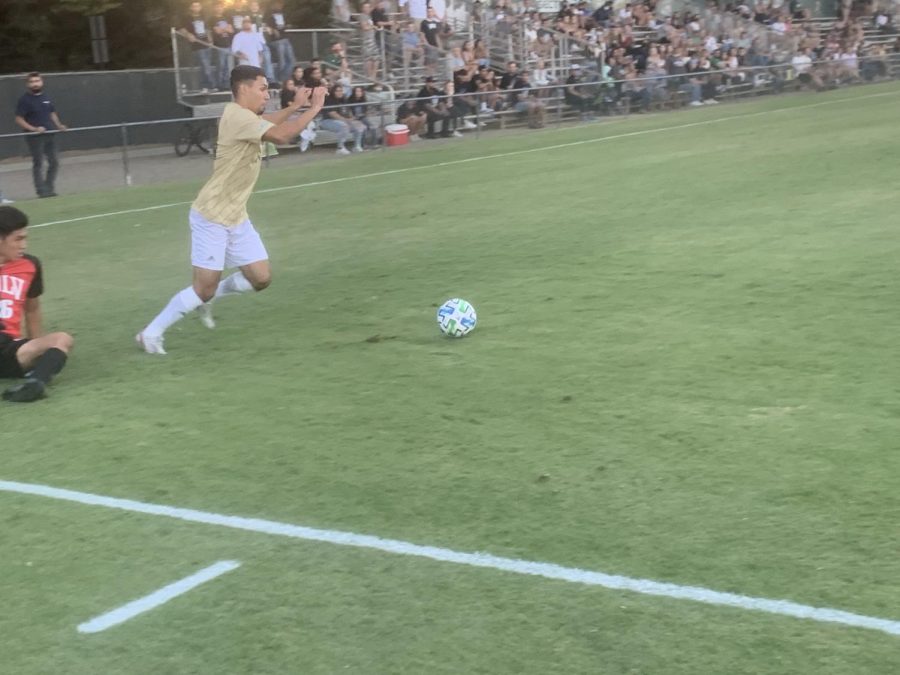 Sophomore forward Christo Cervantes drops a University of Nevada, Las Vegas defender as he dribbles the ball in a match on Friday, Sept. 10, 2021. Cervantes had two shots on goal in Monday night’s loss 1-0 loss to University of Portland.

Sac State men’s soccer team dropped their third straight match after losing 1-0 to the University of Portland on Monday night.

The lone goal of the match was scored in the third minute on a penalty kick by Portland sophomore Brandon Cambridge.

The goal was scored after  freshman defender Alejandro Padilla got called for a foul in the box setting up the penalty kick for Cambridge.

Monday was the second time in three matches that the Hornets were shut out. Sac State now is averaging one goal per match, while allowing more than double that at 2.17 goals per match.

The team mustered three shots on goal, which was an improvement from their match against UNLV where they only got two. The Hornets went into the game with more total shots than the Pilots shooting 11 to their seven, including three from junior midfielder Oscar Govea and another two from sophomore forward Christo Cervantes.

However, Sac State’s three shots on goal were more than Portland’s who only managed two for the game, but the Pilots were able to find the back of the net.

It was a quiet night for goalkeeper Ryan Curtis who had one save, marking his second straight match with a .500 save percentage.

After the goal, the Hornets’ defense held strong for the remainder of the match,but the offense once again could not provide any scoring.

The Hornets only got carded once in the 54th minute when freshman forward Jhared Wilcot picked up a yellow card. The Pilots gathered three yellow cards, but it didn’t make a difference in the score.

The Hornets now sit at 1-5 on the season as conference play approaches at the end of this month.

Sac State’s men’s soccer team returns to action Thursday, Sept. 16, 2021, at 7 p.m. when they take on the University of the Pacific as they wrap up their two game road stand. The match is available for streaming here.