Hornets total three shots on goal for the match 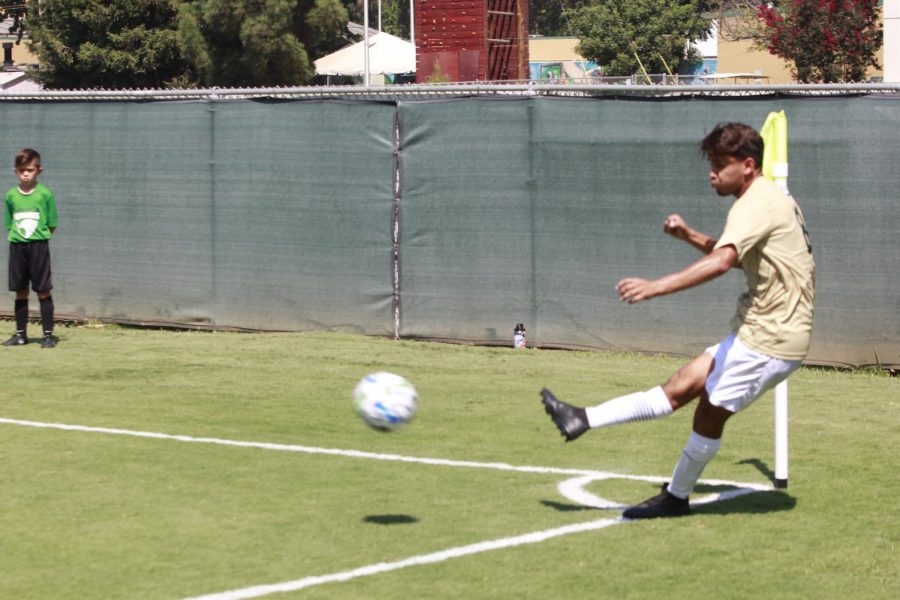 Sacramento State freshman midfielder Axel Ramirez shoots a corner in the first half of the game versus Gonzaga University on Sunday, Sept. 5, 2021 at the Hornet Soccer Field. Gonzaga beat the Hornets with a score of 1-0.

In the first home game of the season for the Sacramento State men’s soccer team, they fell to Gonzaga University 1-0 on Sunday afternoon, dropping their season record to 1-3.

Gonzaga scored its goal in the 29th minute on a strike by freshman midfielder Angelo Calfo.

“No one’s marking their man, and the guy is free right inside the six,” said Sac State junior goalkeeper Ryan Curtis after the match. “If he doesn’t score, it’s his fault, so he did well with it.”

The Hornets struggled to get shots offensively despite controlling the ball for much of the match, getting only three shots on goal for the game.

Head coach Michael Linenberger said that he felt his players did not give themselves the chance to score when they could have.

“For me a lot of it is attitude, we have guys that I thought passed up opportunities to shoot and score a goal,” Linenberger said. “They’re looking for maybe a 100% opportunity rather than a half-chance, looking for one more pass, ‘maybe this guy’s got a little bit better chance.’ We got to take responsibility ourselves and shoot.”

Curtis had a total of six saves by the end of the game.

“I thought we dominated,” Curtis said. “It’s sour we came away with a loss at home, but there’s always room for improvement. We got a game Friday at home. We’ve just got to move on.”

Linenberger was pleased with the general performance of the team.

“Overall we were good, I don’t think we gave away many chances,” he said. “We were really poor on their goal, too stagnant on their goal, but overall I thought we defended well today.”

The Hornets nearly scored in the 42nd minute, but they were penalized for offsides which took away the potentially equalizing goal.

Sac State was aggressive, perhaps to a fault, tallying up 11 fouls in the match, including two yellow cards. Gonzaga was awarded three.

The men’s soccer team is back in action again at home on Friday, Sept. 10 against University of Nevada, Las Vegas at 5 p.m.