Basketball, football players open up about the impact of the NCAA’s name, image and likeness policy 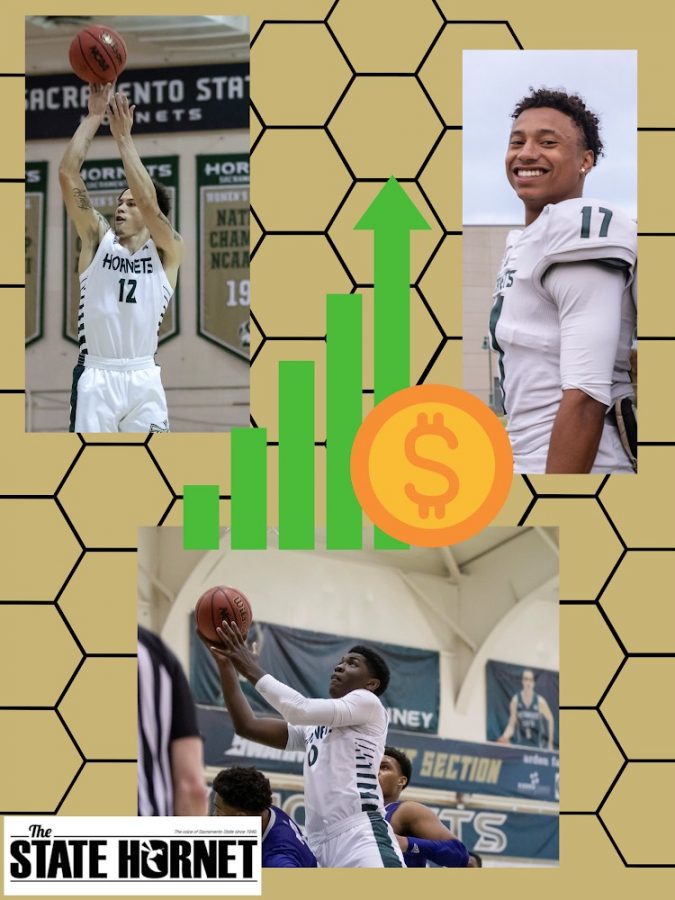 As of July 1, 2021, the NCAA has suspended its policy that previously prevented student-athletes from monetizing their own name, image and likeness (NIL) in licensing agreements, endorsements and sponsorships.

Now, collegiate athlete participants can financially benefit from their NIL in a commercial and promotional context.

Whether it’s University of Oklahoma quarterback Spencer Rattler who inked a deal with Raising Canes, or Fresno State basketball guards Hailey and Hana Cavider who partnered with Boost Mobile after achieving fame on TikTok, the NIL policy is allowing athletes to cash in nationwide— even right here at Sacramento State.

Sac State senior basketball guard Deshaun Highler, who starred in the third episode of the Netflix series “Last Chance U: Basketball,” gained popularity since the show’s release on March 10, garnering over 200,000 Instagram and Twitter followers. After establishing a strong social media following, Highler created a self-brand and began selling his own merchandise after the NCAA policy change,  among other business ventures

“I got all kinds of ideas,” Highler said. “There’s a lot of things in the works. I got a beverage partnership , food partnership, [and] a car dealer partnership.

Although Highler is well positioned to capitalize off of his likeness now with the new policy in place, a reality such as this wasn’t always in the picture. When “Last Chance U: Basketball” was released in March 2021, Deshaun knew the show was popular, but he thought the NIL policy  robbed athletes  of any chance of seeing any financial benefit. However, when the NCAA decided to suspend the rule, everything changed just in time.

“I mean, that’s God,” Highler said. “That’s just divine timing. There’s no words that I can say to do it justice. When the show was being recorded, we of course were thinking, ‘What’s in this for us?’ They’re going to make all this money and what are we going to do? For NIL [policy] to open up right afterwards, it’s just a weight off our shoulders.”

Highler also became a partner with Cameo, an online service that connects celebrities with fans through a face call.

The new NIL policy is also paving the way for some student-athletes to resume passions that used to be impossible once their letter of intent was signed.

Deshaun Highler’s teammate, senior power forward Samaad Hector, recently struck a deal with the apparel brand H&M. Hector always found his niche in fashion. However, due to NCAA policy, Hector could not explore any of the clothing business opportunities he was offered.

“When I was sixteen, I had opened up a [fashion] website,” Hector said. “Once I went to college, I had to knock it off because it was illegal. I’ve always had my name out in that department. “To have this opportunity open up, it was just like, ‘Hey, let’s get back to work.’”

After signing a contract to become an H&M sponsored athlete, Hector has strong ambitions to give back to the community that saw him develop into a Division 1 athlete, Lower Columbia College in Washington.

“I want to get back to Lower Columbia [and]give it back to the kids,” Hector said. “I just hope at some point I’m holding a basketball camp. I want to spoil these kids as much as I can and give as much knowledge as I can because in about five years, they’re going to  be in college.

Some Sac State student-athletes are also realizing the sizable implications and responsibilities that come with the ruling, and are being patient with pursuing anything NIL-related.

Given the substantial size of Cotton’s social platform, he was able to secure a partnership with East Bay, an athletic footwear and apparel provider as part of their back to school line.

“East Bay just reached out to me via email and thought I’d be great for their campaign which was for students coming back to school.” Cotton said in a text message. “I certainly never expected to ever be partners with East Bay.”

Cotton acknowledges that he finds pride in the fact that he was able to manifest a self-made brand that has become embraced by companies such as East Bay.

“The fact that the brand I built for myself without having the intention or knowledge of gaining future opportunities is pretty cool because I’ve just been me the whole time,” Cotton said. “It doesn’t take any extra energy out of me to have to be me and I’m glad they love who I am.”