Live-action adaptation seems to have some promise 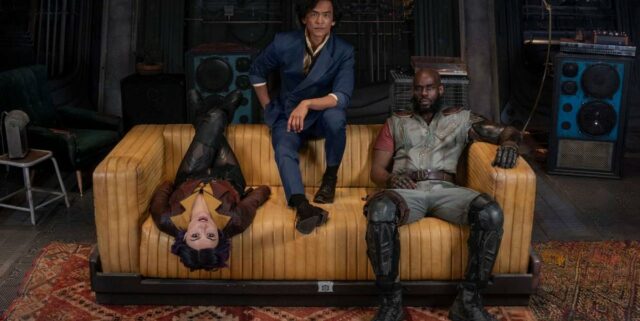 From left to right: Daniella Pineda, John Cho and Mustafa Shakir, the main cast of 2021’s “Cowboy Bebop,” on set in full costume show off the distinct looks and personalities of each character. Comparisons to the original designs are inevitable, according to State Hornet staff writer Zachary Cimaglio. (Image credit: Netflix)

“Cowboy Bebop” is an undeniable classic among anime fans, so naturally Netflix announced their own rendition of the 1998 anime back in 2017.

The new series, simply titled “Cowboy Bebop,” is apparently meant to be more than just a straight remake of the original. Instead, it will simply tell a brand new story set somewhere in the middle of the events that have already been established in the original.

In other words, Nemec plans to add on to the existing canon of the anime, rather than try to recreate the same story we already saw.

With their attempts at recreating “Death Note” and “Fullmetal Alchemist” both ending up as critical failures due to their mishandling of the original canon, straying away from it entirely this time to tell something original seems like a smart choice.

This decision ensures that even if it does fail, it will dampen the impact it has on Shinichirō Watanabe’s original work and provides room for creativity with the story, allowing for some leeway to work the show’s themes into a more grounded, live-action setting.

Then, of course, there are the action scenes.

The 1990s were a renaissance for the anime industry with shows like “Neon Genesis Evangelion” and “Cowboy Bebop” itself setting the standard for the sci-fi genre going forward.

Both shows had revolutionary action scenes with fluid, hand-drawn animation and incredible soundtracks to accompany them to make sure that the audience always knew what was going on without any room for confusion.

In contrast, many modern action films today tend to use choppy, overly edited action scenes to make up for the main actors’ lack of experience in stunt work or combat of any kind.

As such the new show’s star, 49-year-old John Cho, has already been met with criticism in large part due to his age being nearly twice that of his character.

Cho plays 27-year-old Spike Spiegel, the anime’s protagonist, in the new series. Spiegel is an interstellar bounty hunter with a dark, mysterious past and a diverse repertoire of combat and piloting skills.

With this in mind, it’s understandable why people might be worried about casting the former co-star of “Harold and Kumar” in a series known for intense fight scenes that sometimes lasted several minutes.

However, Cho is no stranger to sci-fi action sets having played Sulu in the “Star Trek” reboot films. Honestly, seeing his costume and hair all styled up in typical “Bebop” fashion does show a glimmer of hope for the series.

Cho has said that he doesn’t like the idea of wearing a wig, since he wanted to get Spike’s look down naturally.

This should be a breath of fresh air for “Bebop” fans already. Cho’s refusal to fake his hairstyle shows that he is dedicated to getting the character right and making sure he looks the part.

Live-action anime adaptations already face an uphill battle in terms of character design. Hair stylists are faced with the choice of either recreating the already unnatural hairstyle that many anime characters have or abandoning it entirely for something more natural.

In other words they have to decide whether they want their main actors dressed up in a cosplay wig or style their hair in a way that doesn’t even resemble the character, which begs the question: why bother making it live action to begin with?

“Cowboy Bebop” benefits from having relatively natural, down-to-earth character designs-aside from all the cybernetics-, so it almost seems the perfect choice for a live-action series.

Looks aside, for this series to successfully adapt such a unique cast of characters, it will be important that Cho and his co-stars retain the chemistry and heartfelt camaraderie that made the original so beloved.

Having the anime’s creator, Shinichirō Watanabe, as a consultant and retaining the original composer, Yoko Kanno, to do the soundtrack should hopefully ensure that the series remains true to what made the anime so iconic to begin with.

“Cowboy Bebop” will be released onto Netflix on Nov. 19, 2021, and considering their track record they have an obligation not to disappoint or they might be saying “see you, space cowboy” for good.