FAQ: What to know about California’s gubernatorial recall election 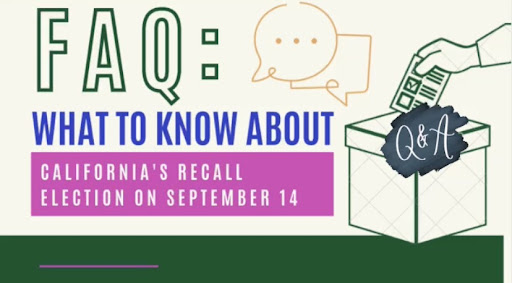 California’s gubernatorial recall election will take place on Sept. 14. Voters will decide if Gov. Gavin Newsom will be removed from office or finish out his term, which ends Jan. 2, 2023. Graphic by Anh Nguyen in Canva.

As the California gubernatorial recall election approaches, The State Hornet compiled answers to frequently asked questions about the recall and how to vote.

Question: When is the recall election?

Q: How does voting in the recall election work? What are the questions on the ballot?

A: There are two questions on the ballot, according to the Secretary of State’s office. The first question is “Shall Gavin Newsom be recalled from the office of Governor?” Voters can then select yes or no.

The second question allows voters to select a replacement candidate should the ‘yes’ vote receive more than 50% of the vote in question one, causing him to be removed from office.

Q: Where can I vote?

All polling locations are open from 7 a.m. until 8 p.m. on election day, and voters in line by 8 p.m. will be able to vote, according to the Sacramento County website.

Q: If someone votes to not recall Newsom, can they still vote for a replacement candidate just in case Newsom does get recalled?

A: Yes. A voter’s selection on the second question does not affect their vote on the first question, so a voter can select a replacement candidate even if they vote to not recall Newsom, according to the Secretary of State’s office.

However, a voter is not required to answer both questions on the ballot if they do not want to.

Q: Can I write in Newsom as the replacement candidate?

A: No, he is not listed and votes for him as a replacement candidate will not count. According to the Secretary of State’s office, “a person whose recall is being sought cannot be a candidate to succeed themselves at a recall election.” If you want to allow Newsom to remain in office, then in the first question on the recall ballot on whether to remove Gavin Newsom from office, select “No.”

Q: If Newsom is recalled, does the replacement candidate need more than 50% of the vote on the second question?

A: No. If Newsom is recalled with more than 50% of the vote on question 1 being ‘yes,’ the candidate with the highest number of votes on the second question wins, according to the Secretary of State’s office.

According to the Associated Press, because 46 replacement candidates are running, “the winner would likely become the next governor of the nation’s most populous state with 25% or less of the votes.”

Q: If Newsom is recalled, how long would the replacement candidate who wins be in office?

Q: Who are the top polling candidates?

A: The Secretary of State certified a list of 46 certified replacement candidates on July 21, 2021.

Larry Elder is a conservative radio talk show host. Elder has said he believes there should be no minimum wage in the state as well as no mask, COVID-19 vaccine or testing mandates. Elder has also said that Roe v. Wade is “one of the worst decisions that the [U.S.] Supreme Court ever handed down” and that he is “pro-life.”

Kevin Faulconer was the mayor of San Diego from 2014 to 2020 and served on the San Diego City Council from 2002 to 2014. Faulconer has stated that he is pro-choice with regards to abortion and has described himself as a “vanilla” candidate in the election. He also has said he will solve the state’s homelessness crisis by opening more shelters and enforcing no-camping laws in public.

John Cox is an investment manager and accountant. Cox lost to Newsom in the 2018 gubernatorial election, receiving 38% of the vote, according to Ballotpedia. He has campaigned around California with a bear to go along with his tagline “Meet the Beast,” and an 8-foot ball of trash, symbolizing the issue of the “mess” created by homelessness in the state. Cox has said he would take a treatment-first approach to solving the homelessness crisis, requiring mental health or substance abuse treatment before shelter is given to those who are homeless.

Kevin Kiley is a member of the California State Assembly R-California-6th, which encompasses Roseville, Rocklin and Folsom. Kiley has said he would attempt to aid the homelessness crisis by opening more shelters and auditing all state funding and programs that address homelessness.

Caitlyn Jenner, a former reality star and Olympian, has said she would turn to faith-based organizations to address the needs of homeless people in the state.

The highest polling candidate running as a Democrat is Kevin Paffrath, a real estate agent and a YouTuber who gives financial advice. Paffrath has said he would declare a state of emergency regarding housing and would have the National Guard build emergency housing where people could receive food, healthcare and treatment for substance abuse.

Faulconer, Cox and Kiley all said during a debate on Aug. 17 that they would repeal any statewide masking and vaccination mandates. Paffrath has said “individual businesses should determine themselves if vaccine or mask mandates are right for their businesses” and the “governor’s office should be responsible for clean air [filtration/ventilation] and education.”