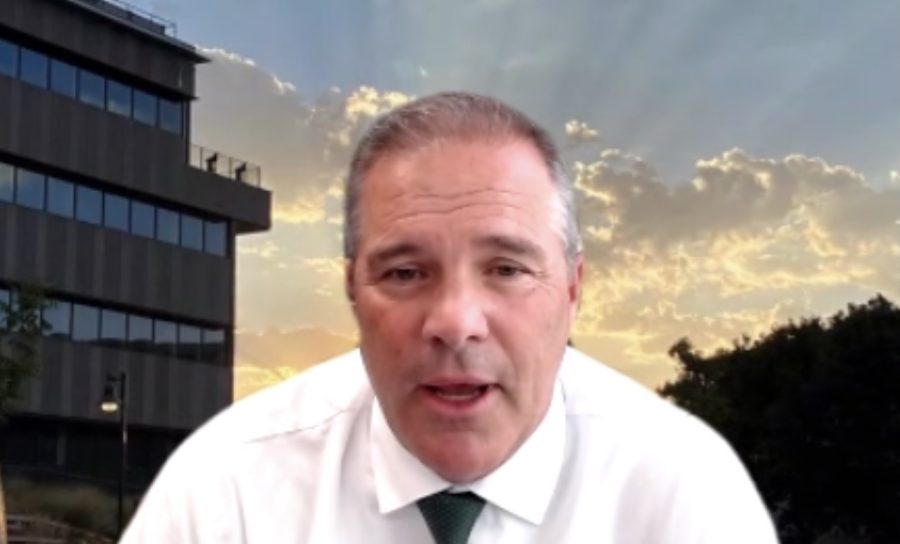 Provost Steve Perez speaking to the Sacramento State Faculty Senate about COVID-19 policies and the upcoming anti-racism convocation via Zoom on Thursday. Perez emphasized a need for faculty to be flexible and ready to teach even if classes or campus were to close. (Photo taken via Zoom by Odin Rasco.)

Sacramento State’s first Faculty Senate meeting for the fall 2021 semester highlighted multiple upcoming changes and updates about the return to campus on Thursday.

Provost and Vice President of Academic Affairs Steve Perez spoke about the need for faculty to remain adaptable during this time, be it the closures of Calaveras or Sequoia Halls due to damaged air conditioning units the first week of the semester, or any number of possible issues that could arise due to COVID-19.

He said that professors should be prepared to conduct classes if campus were to close again.

“We need to have plans for if we have to interrupt our normal operations,” Perez said. “It’s like an insurance policy.”

Ed Mills, vice president of student affairs, said the number of students enrolled at Sac State at the time of the meeting was 31,856, though Mills noted that around 300 to 400 of those students appear to have abandoned their enrollment. Even with that taken into account, Mills said enrollment appears to be holding at the same levels as last year.

“We had the goal of keeping these levels flat, and we’ve hit that goal,” Mills said.

Mills said that 26,543 students have already self-certified their COVID-19 vaccination status, and another 2,162 have claimed either religious or medical exemption from the requirement.

In the meeting, it was established that the Sept. 13 deadline is for self-certification, not for upload and approval of documents like a student’s vaccination card. Because of the last-minute nature of the setup for this process, Mills said there will be a time gap between document submission and approval but that students do not need to worry.

In order to provide a means of testing for the students who have claimed a medical or religious exemption to the vaccination requirement, Mills said the first floor of Parking Structure III will be converted into a COVID-testing site and open from 8:30 a.m. to 4 p.m. Mondays through Fridays.

It will allow 40 students to self-administer COVID tests at a given time, with each test process taking around 20 to 30 minutes. Students who have certified an exemption will be required to test for COVID twice a week, and this will be tracked by use of a OneCard scanner at the site.

Chet Madison Jr., the new Sac State police chief, also spoke about his commitment to “three core pillars” he intends to focus on: protecting the campus, building trust with the campus community and being approachable.

Melinda Wilson Ramey, interim vice president for inclusive excellence, spoke during the open forum portion of the meeting to discuss a convocation regarding Sac State’s commitment to anti-racism on Sept. 27. The meeting will go over the university’s plan, how it was developed and introduce it to campus leadership. Ramey said that students are encouraged to attend.

Perez talked about the need to do the work to ensure that the university continued to improve its commitment to anti-racism policies.

“We need to focus a plan on student success and anti-racism,” Perez said. “We also need to work to recognize the work made toward those goals. We need to have those conversations, even though they are hard.”

Jenae Cohn, the director of academic technology, announced that the campus Information Resources and Technology department will begin a rollout of two new systems to integrate into the Canvas software. One system, Gradescope, will allow for automated grading systems.

The other system is the migration of video hosting to a new service which will allow for better video quality and more options for interactibility for students. However, this conversion will not happen without its growing pains for teachers, as all the content they currently have on their Canvas courses will have to be re-linked to the new source pages for their videos.

For some professors, this may mean the process of changing the links to hundreds of videos for even a single course. IRT said faculty that  face such a task should confer with them to develop a solution for the issue.

Mills also noted that expansions to The Well are nearing completion, which will provide additional space for changing rooms, multipurpose spaces and expanded space for counseling services.