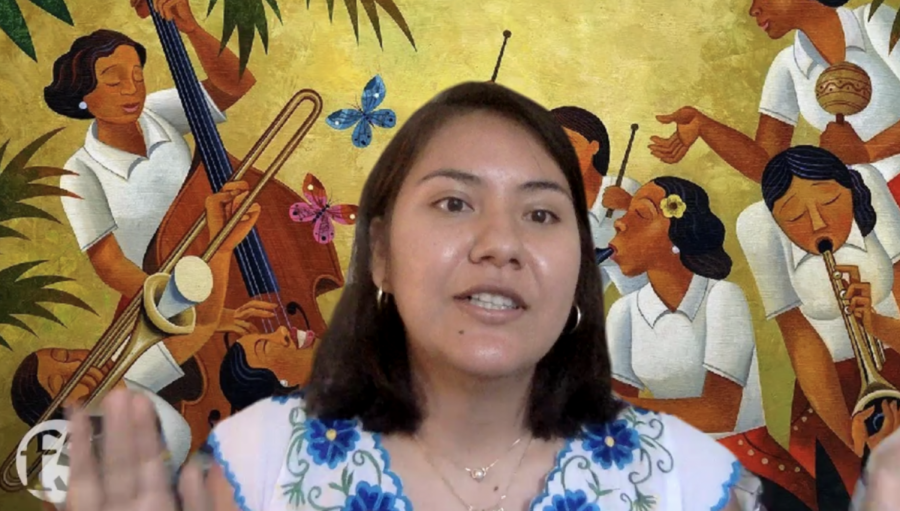 Political science major Kristal Padilla speaks about her journey in pursuing higher education during the “Spotlighting Plática” hosted virtually by CHLFSA on Sept. 23, 2021. She transferred to Sac State after three years of attending De Anza College. (Screenshot by Erick Amaya).

The Chicanx/Latinx Faculty and Staff Association held its first “Spotlighting Plática” where professor Joanna Nuñez, Serna Center coordinator Noel Mora and student Kristal Padilla shared their journey in higher education. Their work was shown on Thursday during the Zoom event.
Kristal Padilla
Kristal Padilla is a political science major in her final year of undergraduate school. As a senior, she feels fortunate to have women professors and professors of color, something that she had not experienced before.

One thing she emphasizes in education is mental health. Having suffered from depression, Padilla decided to not pursue higher education straight out of high school. Previously, she had accepted several scholarships and was set to enroll at the University of California, Merced.

After years of working, she found motivation to return to school. From there, she found her passion for political science. Later she transferred to Sac State because she said she felt it was best for her education.

“I always tell everyone that I am super lucky,” Padilla said. “I really like what Sac State has to offer and the communities you can find.”
Joanna Nuñez
Joanna Nuñez is an assistant professor with Sacramento State’s women’s and gender studies.

Raised in Northern California and Las Vegas, Nevada, Nuñez grew up being an activist. At 16-years-old, she organized walkouts on the Border Protection, Antiterrorism and Illegal Immigration Control Act that coincided with “A Day Without Immigrants” marches in 2006.

“At the time we didn’t see ourselves as activists or organizers,” she said. “We were just young high school students who were identifying [with] what was happening.”

Through activism, she met people who were able to introduce her to ethnic studies and women’s studies courses. From there, she said her passion for higher education was born.

Now, as an assistant professor at Sacramento State, she said she aspires to use her journey to create a space where she can mentor and support students.
Noel Mora
Noel Mora is currently the Serna Center Coordinator and has been part of the Sacramento State community for several years.

Mora enrolled at Sac State in 2014 as an undergraduate student. He received his Bachelor’s in Arts in Government in 2018. Learning about the Serna Center during his junior year, he enjoyed their community events and frequented the center.

As a student, he formed part of the Model United Nations program, where he learned to view the United States from a different perspective, learning from other students from around the world.

“It was probably the most intimidating thing I had ever done,” Mora said. “But I’m glad I did it because I think there’s nothing like feeling like a global citizen.”

After receiving his bachelor’s degree, Mora began working toward his master’s degree in Public Policy and Administration at Sac State. During his first year of graduate school, he also served as ASI President Mora later finished his master’s program last spring.