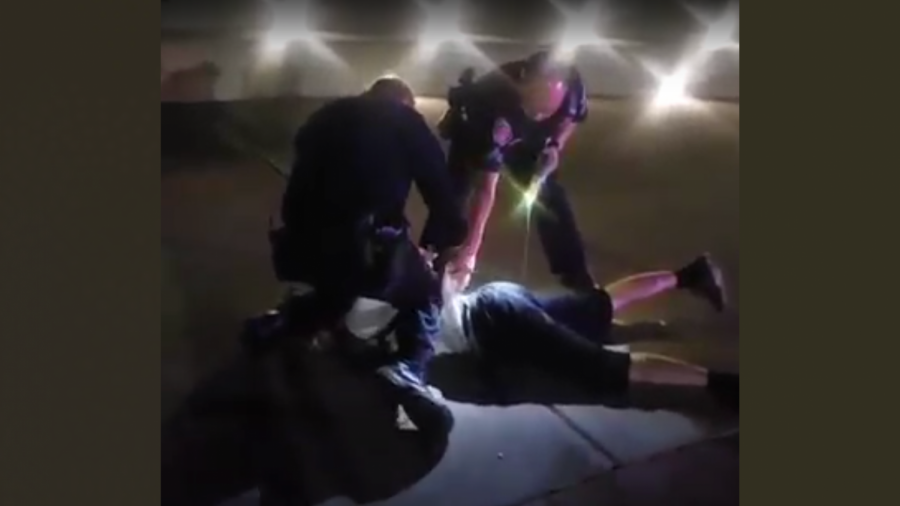 Sergeant Vincent Burton (left) of Sacramento State’s Police Department kneels on the neck of a cyclist for approximately 23 seconds while handcuffing him after Corporal Doug Nguyen (right) deployed his stun gun twice into the suspect on June 4, according to anonymous sources. Photo courtesy of Francisco Munoz.

Update Thursday, June 24, 2021: This story has been updated to include Sacramento State’s official statement regarding the incident on June 4.

On June 4, approximately 30 cyclists in Sacramento participated in a memorial “ride-out” for a mutual friend of theirs who died in an accident earlier that week.

The cyclists stopped at Sacramento State to grab some water. To combat boredom while they waited for their peers to catch up, many riders began to perform tricks off of stairs and other structures. It did not surprise many cyclists to see an officer arrive on the scene; they have been asked to leave properties before.

What cyclists said surprised them was the brutality with which an officer detained two suspects, tasing and kneeling on the neck of 26-year-old Francisco Muñoz.

Advisory: Video below contains explicit language and content that some viewers may find offensive and disturbing.

Brandon Cenobio, a cyclist and 24-year-old diesel technician, said the ride-out started in Midtown. He added that they are an almost weekly occurrence.

“We usually go in [Sac State] to fill up our water bottles, stretch our legs and let people catch up,” Cenobio said over Instagram direct message.

What he found uncommon was the sudden aggressiveness from the first officer on the scene.

According to Cenobio, the officer had been in his vehicle for some time as cyclists filed into the east side of the campus from the Guy West bridge. It was only after a majority of the group had arrived that the officer got out of his car and told them they all had to leave.

The Sacramento Bee reported that an officer was sent out on reports of bikers ripping down a sign and using it to do tricks.

Cenobio said that the cyclists did use signs to do tricks, but the signs were foldable, portable A frame signs that read “face coverings required.” They placed the signs on the stairs and used them as ramps.

After officers arrived on the scene, a member of the cyclists, a boy wearing an orange and yellow tie-dye shirt, faced off with the officer and attempted to ram him with his bike, according to The Bee.

ABC10 reported the officer was rammed with the bike.

Cenobio said he interpreted it differently.

“Someone rode a wheelie by him, and I guess that’s what made him [the officer] mad,” he said.

Advisory: Video contains explicit language and content that some viewers may find offensive and disturbing.

Video from that night depicts onlooking cyclists vocally denouncing the officer’s decision to use force on a minor, though it is unclear in the video whether the riders were on their bikes and circling law enforcement as stated in The Bee’s report.

One of the cyclists present that night agreed to speak to The State Hornet anonymously for fear of retaliation from the Sacramento Police Department, who CBS 13 reported is assisting campus police with the investigation of the incident.

“He grabbed him. Threw him down. Manhandled him,” the source said. “After that, I was openly criticizing him, like ‘What are you doing? That is a child. What the f— is wrong with you?”

In another incident according to The State Hornet’s anonymous source, an officer attempted to stop the cyclists from doing tricks on their bikes with the signs.

“He was all, ‘how many tires, how many’ and he just kept saying, ‘tire’ over and over again. You can see in his eyes he’s panicking, he doesn’t know what he’s doing,” the source said.

On June 10, Muñoz posted an 11-second clip on his Instagram account that shows Corporal Doug Nguyen of the Sac State Police Department asking the cyclists how many tires should be on the road at all times. Toward the end of the clip, Sergeant Vincent Burton is shown reaching out to the phone with his hand.

“Imagine if there was no video, this is where I was first grabbed by them,” Muñoz wrote in the post.

Around the time Burton reached out for the camera, Muñoz reportedly raised a fist to swing at the officers, according to The Bee. One of the officers, who The State Hornet’s sources identify to be Corporal Nguyen, decided to use his stun gun on Muñoz to assist in taking the man into custody.

From footage Cenobio recorded that night, it is inconclusive whether or not Muñoz raised his fist before the officers began restraining him.

“They grabbed both his [Muñoz] arms from both angles, and were pulling them back and forth,” Cenobio said.  “He  [Muñoz] broke free from them and took off running. I turned with my camera and you can see him run. The cop comes and tases him, and he keeps running a little bit and he [Nguyen] tases him again.”

In an interview with The State Hornet, Muñoz said he did not intend to run from the cops at first and only did so after they began to cause him physical pain.

“It felt like they just wanted to break my wrist,” he said. “I know it’s my word against theirs. I have no reason to fight two cops. I had tapped out. I was telling them, ‘Okay, you’re bending my wrist so hard that this doesn’t make sense.’”

Muñoz added that he was never told he was being detained, and was just grabbed without words.

Advisory: Video contains explicit language and content that some viewers may find offensive and disturbing.

According to The State Hornet’s anonymous source, it was then that Burton caught up with Nguyen and Muñoz.

“He [Corporal Nguyen] tases this guy, and another officer [Sergeant Burton] comes from behind, pushes me and said, ‘Do you want to be next?’,” the source said.

Moments later, the source said it was Burton who put his knee on Muñoz’s neck.

In a video sent to The State Hornet of that night, Muñoz is heard shouting “Get off my f—— head, bro,” while other cyclists shout concurring statements.

Burton has been with Sac State’s Police Department as a sergeant since 2013, according to the volume 7, issue 2 of Sac State’s administration and business affairs newsletter.

The ABA newsletter also documents Nguyen’s two awards as an officer during his time at Sac State. The first was in fall 2011 when he was presented with department recognition from Mothers Against Drunk Driving (MADD) for DUI arrests made in 2010 while the second was a public safety award for being “employee of the quarter” in 2013.

Sac State’s Police Chief Mark Iwasa, who is set to retire this summer, said the use of force was certainly within policy for the officers in videos he had seen on social media. The use of restraints on detainees should continue “for as long as is reasonably necessary” to guarantee safety of both officers and others around, according to policy 306.3.1 in the Sac State police department policy manual.

“I don’t know if I’d characterize it as leaning on his neck,” Iwasa said. “He certainly had weight on his upper back. But, you know when you’re trying to handcuff a person and get their hands behind their back, and they’re actively fighting you, you’re going to have to hold them down somehow.”

After the officers arrested Muñoz, he was medically cleared at a hospital and then arrested and booked into jail, according to The Bee.

According to Iwasa, a robbery felony was originally included in the charges but further investigation led Sac State’s police department to request that those charges be dropped.

The Bee said that the body camera was first removed during the melee.

ABC 10 reported that the police later said the body camera had fallen off and another person had picked it up and taken it.

When Muñoz appeared in court on June 8, only one charge remained: one count of misdemeanor resisting, obstructing, delaying of peace officer. This information was confirmed by the Sacramento County District Attorney’s Office.

Iwasa said the body camera has yet to be recovered.

Sac State’s Police Department’s posted crime log does not contain information regarding the minor taken into custody that night.

Sac State’s Police Department policy manual also states that a juvenile under 14-years-old should not be restrained unless they are suspected of a felony or “when the officer has a reasonable suspicion that the juvenile may resist, attempt escape, injure him/herself, injure the officer or damage property.”

Sources estimate the boy was around 15 to 16 years of age.

Cenobio said the ride concluded with a spotlight on them from above as they were chased by a helicopter through the fab 40s, a collection of streets between 40th and 49th street in east Sacramento.

“There was a helicopter above us for about eight blocks,” he said. “They left us alone after that.”

Muñoz said he stayed overnight in county jail and was able to post a $5000 bail the next day.

Muñoz also said he visited the hospital the next day to receive a CT scan and X-rays that totaled approximately $5000 in medical bills. The CT scan revealed internal bleeding in his head, and the X-rays showed sprains on both of his hands and wrists.

He received an EKG the night of the incident.

“The police took me to UC Davis where they said they would ‘cover the cost,’” he said over Instagram DM. “Then, I received a bill for around $4,000 a few days later.”

In response to the incident, the university said in an official statement Thursday that this event will be subjected to a use of force review to keep with departmental policy.

The university also said that the officer did not kneel on Muñoz’s neck, instead his upper back.

“During the adult’s arrest, the officer used his body weight across the shoulder blades and very briefly near the base of the neck of the individual in order to take him into custody,” wrote the university in an email to The State Hornet.