REVIEW: “The Mitchells vs. The Machines” is fittingly eccentric and heartfelt 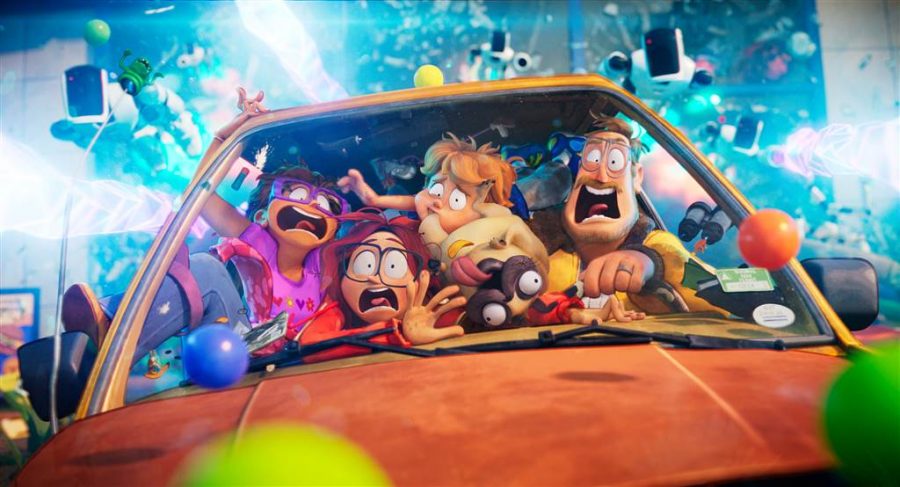 The titular Mitchell family from "The Mitchells vs. The Machines". From left to right, Linda, voiced by Maya Rudolph, Katie, voiced by Abbi Jacobson, Aaron, voiced by Michael Rianda, Monchi, voiced by Doug the Pug, and Rick, voiced by Danny McBride. Photo courtesy of Netflix.

Leaving your family behind to experience and grow in your life isn’t going to set off catastrophic events leading to the end of humanity. Right?

For any parent, having to send their child off into the real world is one of the most emotional experiences they’ll ever face.. For that child, it may be just as emotional or an opportunity to branch out and finally find themselves due to their disconnection from their own family. These common experiences are explored in “The Mitchells vs. The Machines” all set against the backdrop of a robot apocalypse.

We all confront our familial issues in different ways. For the Mitchells, it’s while saving the human race.

Katie Mitchell, voiced by Abbi Jacobson, is on her way to achieve her dream of going to film school in Los Angeles and getting away from her strange family. Her father Rick, voiced by Danny McBride, has other plans and decides to take a family road trip for one last get together and to try to patch things up with Katie. Unbeknownst to the family, the Artificial Intelligence system PAL, voiced by the incredible Olivia Colman, has started a robot uprising to send the entire human race into space.

The Mitchells are far from any perfect family. Katie and Rick have a rocky relationship that is nothing like the connection they used to have when Katie was younger, Linda is obsessed with their perfect neighbors and the youngest child Aaron, voiced by Director Michael Rianda, is in love with dinosaurs a little too much. It’s these imperfections in their personalities that make them so likeable. There’s a strong relatability to them, and it wouldn’t be hard to find yourself or one of your own family members in them.

Sony Pictures Animation has genuinely been doing a lot to change the game in terms of bringing unique and innovating animation stylings to the medium. Whether it be with fast paced frantics of the “Hotel Transylvania” series, or the comic book aesthetics of “Spider-Man: Into the Spiderverse”, there’s always excitement to see how they try to push the animation medium. While they may never reach the heights of studios like Pixar or Studio Ghibli in terms of their stories at times, how can you when you’ve made “The Emoji Movie”? Yet “The Mitchells vs. The Machines” shows that they do have the capability to compete with them.

The animation here is truly spectacular. The character designs are incredibly distinctive and give the Mitchells so much personality leading to some very humorous facial reactions. Linda, voiced by Maya Rudolph, makes some really great expressions with her face toward the later half of the film during a major character moment that truly shows off the incredible, hilarious work these animators have done. It has the look of a hand drawn film with many of the characters having hand drawn lines on their outlines. The film looks like an even livelier 2D animation which already sets it apart from the animation of other major studios.

But the thing that really sticks out here is the little doodles and filters added throughout the film. These little bursts of animation feel reminiscent to the films Katie makes in her spare time and add so much expression to the movie. In their own fun style, it gives an easy way into the mind and feelings of each character. A simple rainbow and heart doodle here and there can do a lot.

Director Michael Rianda proves he’s got a knack for incredibly fast paced humor with a lot of jokes flying by quickly, though some of the humor relying on memes already feel dated. Even now cat filter jokes feel out of place.

The film is produced by Phil Lord and Christopher Miller, the creative minds behind “The Lego Movie” and the “Jump Street” films, and the brand of humor they’ve become synonymous with is seen throughout this whole film. The standout here is a battle between the Mitchells and a giant Furby. However, Rianda still makes this his own film, mostly due to the  amount of care and heart he puts not only into the story but its characters as well.

The whole film is a love letter to families and their imperfections. The film’s end credits are filled with family photos of the cast and crew, which is such a nice and sweet touch to end the film. No family needs to be perfect to be the so-called “best” but to just be themselves.

Sure, the film also wants to comment on the current state of technology and our reliance on it. It mostly boils down to a simple message of phones having made us more connected digitally but not so much emotionally, and anytime the film has to cut to the tech side story of the villain PAL, it breaks the pace a bit. But it’s in the theme and heart of family where the film truly shines. The best way to describe the Mitchells would be an even more offbeat version of the Parr’s from “The Incredibles” without any of the superpowers. But even the Mitchells are allowed to save the day too.

“The Mitchells vs. The Machines” is a new animated staple. It soars high in terms of its zany humor, wonderful characters and some stunning animation that is unlike so much of its competition. It truly wins in its wonderful heart and emotion that will more than likely hit you not even 20 minutes into the film. It’s a real crowd pleaser that will hopefully get a major audience and lead to more work for Michael Rianda.