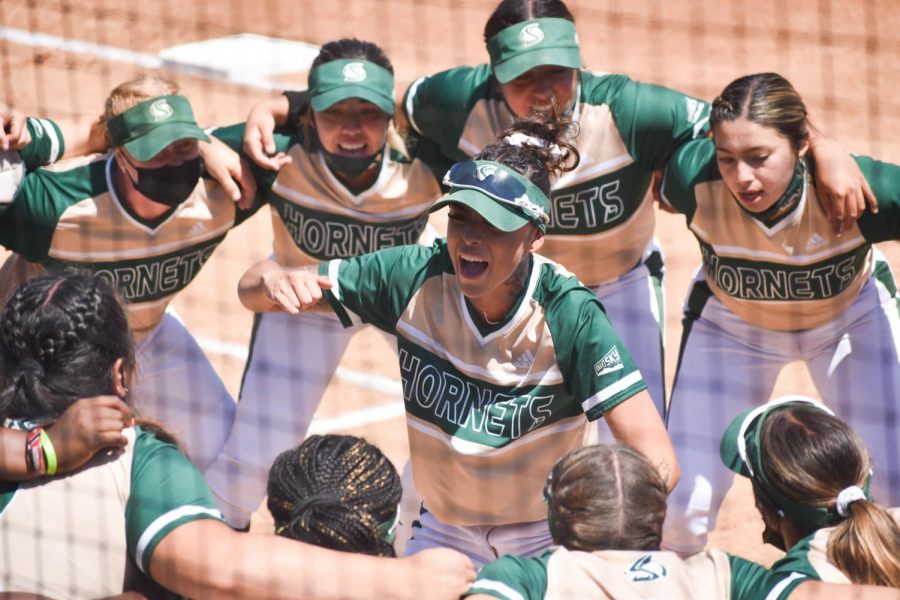 Charizma Guzman pumps up her team before the start of the last of three games against Idaho State at Shea Stadium at Sacramento State on Saturday May 1, 2021. The Hornets dropped 2-of-3 from the Bengals over the weekend.

The Sacramento State softball team dropped 2-of-3 to Idaho State University and celebrated its seniors in the last home series of the year at Shea Stadium this weekend.

In the bottom of the first, the Bengals allowed sophomore outfielder Haley Hanson to get on base with a walk, however she soon was called out attempting to steal second. Senior outfielder Charizma Guzman, who has been battling a foot injury all season, singled and stole second base, but she was eventually stranded on base.

The Bengals started off the second inning with a base hit and a home run, to take a 2-0 lead.

The Bengals hit another homer in the top of the sixth, making the score 3-0, but junior Carley Morfey came back to score in the bottom of the sixth on a double by sophomore Lewa Day, setting the score at 3-1. That is where the score remained as the Hornets dropped game one.
Samantha Parish’s first home run leads Hornets to 4-2 win
Freshman pitcher Kelsey Alcantara started the second game for the Hornets and started strong, shutting down the Bengals in the first.

In the second inning Day singled followed by junior Alondra Mejia reaching first on an error by the Bengals, allowing Day to advance to second.

After a sacrifice bunt advanced both runners, freshman outfielder Alexis Parish hit a sacrifice fly to centerfield that allowed Day to score from third, giving the Hornets a 1-0 lead.

The Bengals came back at the top of the fourth as Angelica Cano doubled on a 3-1 pitch. After she was advanced to third the Bengals tied the game on a sacrifice fly of their own.

In the bottom of the seventh, Day doubled to center field and freshman shortstop Kennedy Echols pinch ran for Day. Sophomore pitcher Samantha Parish singled and middle infielder Katie Vretzos singled to right field, allowing Parish to advance to third and Echols to score, tying the game at two.

Those clutch hits sent the game to extra innings.

After a scoreless eighth inning, freshman outfielder Camryn Thomas stepped in to pinch run for Mejia after she reached on a fielder’s choice. But Thomas’s speed on the bases wouldn’t be needed as sophomore catcher Samantha Parish slugged the first homer of her college career for a dramatic walk-off win.

The Hornets ended the game with a score of 4-2, splitting the double header and eliminating Idaho State from playoff contention.
Bengals score five in the first, Hornets just shy of comeback lose 5-3
The three-game series continued on Saturday as it was Senior Day for the Hornets, recognizing Guzman, Vretzos and Kailie Hargis.

This game was a tale of the first inning. Bertuccio came back in to start and began the game by walking a batter and hitting another. Bertuccio allowed 5 runs on 4 hits in the inning and put the Hornets in a 5-0 hole.

The Hornets came back strong in the bottom of the first as Day walked and Morfey had a base hit to put runners on first and second. Mejia then cleared the bases with a 3-run homer making the score 5-3.

Bertuccio, who threw 62 pitches in the first two innings, was replaced by junior pitcher Alyssa Nunez in the top of the third. Nunez shut down the Bengals with two ground outs and a strike out.

In the bottom of the third, Mejia and Morfey had singles but were stranded on base as the Hornets were unable to score.

Nunez dominated the rest of the game giving up no hits through her five innings of work.

While the Hornets had plenty of opportunities they were unable to score and left seven runners on base in the final six innings.

Despite their two losses over the weekend, head coach Lori Perez said she is positive the team will bounce back.

“We have a resilient team, and I have no doubt they will come back home and get back to work,” Perez said. “Our goal is to be playing our best during Big Sky Conference Tournament time.”

The Hornets will head to Southern Utah University next weekend to compete in another three-game series.