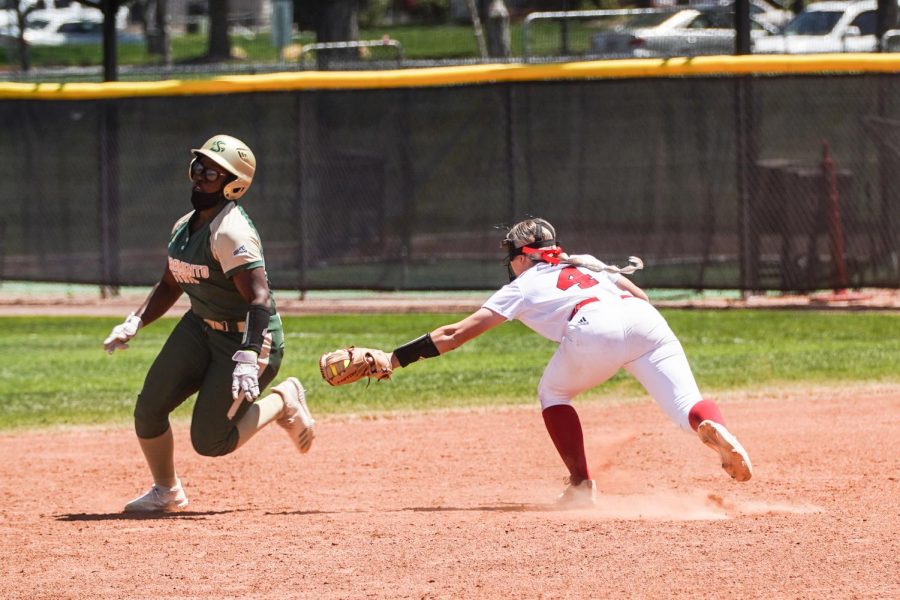 Sophomore third baseman Lewa Day secures a run for the Hornets against Southern Utah University at Kathryn Berg Field in the first game of the doubleheader Friday, May 7, 2021. Day hit four home runs during the games held Friday, setting a record for most home runs hit by one player in one calendar day in program history. Photo Credit: Joey DeGraaf and the Southern Utah University athletic department.

The Sacramento State women’s softball team competed in their final series of the regular season this weekend at Kathryn Berg Field at Southern Utah University.

Before heading into the weekend, sophomore outfielder Haley Hanson explained the team’s mindset about the matchup against Southern Utah.

“I think we’re just looking at this weekend as another way to get better and another team that is just in our way for the conference tournament,” Hanson said. “We’re just going in, working with a clear mind and we’re going to continue to grind out for the week.”
The Hornets crush the Thunderbirds 11-1 with 2 homers by Lewa Day and 5 runs in the first
The Hornets came out of the gate swinging in the first game of the series Friday.

Sophomore outfielder Haley Hanson started the game off with a strong single to left field, and sophomore third baseman Lewa Day followed to the plate as she effortlessly hit her first homer of the game, batting in Hanson and placing the score at 2-0.

Junior first baseman Alondra Mejia was hit by a pitch that let her walk, afterward sophomore catcher Samantha Parish and junior pitcher Carley Morfey were both able to connect with hits and find their way on base. Senior middle infielder Katie Vretzos doubled to the outfield with two outs on the board for the Hornets, scoring Morfey, Samantha Parish and Mejia and making the score 5-0 in top of the first.

Hornets sophomore pitcher Marissa Bertuccio limited the Thunderbirds’ time at bat in the bottom of the first, starting the inning by hitting a batter but completing the inning with two strikeouts.

In the bottom of the fourth, Bertuccio gave up her third hit of the game and the Thunderbirds were able to score a homer on a 3-1 pitch, putting the score at 7-1.

In the top of the fifth, senior outfielder Charizma Guzman singled to shortstop and was successful in stealing second. Sophomore catcher Amber Rodriguez stepped in as pinch hitter for freshman shortstop Kennedy Echols as the Thunderbirds allowed her a free walk. Day shut it down as she hit her second homer of the day, scoring Guzman and Rodriguez and putting the score at 10-1.

Mejia gained a walk-on full count pitch and freshman outfielder Camryn Thomas came in as pinch runner for Mejia in the top of the fifth. Senior middle infielder Kailie Hargis pinch ran for Morfey as Morfey also secured a free walk on a 4-0 pitch. Freshman first baseman Milan Machado-Buckley pinch hit for Alexis Parish and Samantha Parish kept the game alive as she singled up the middle, scoring Thomas and ending the game in a 11-1 victory for the Hornets.
The Hornets score 8 in the first two innings but struggle to hold onto lead, resulting in 11-8 defeat
The Hornets made quick work to secure points on the board in the first two innings of the second game.

Guzman singled to second in the top of the first, and Day didn’t let off the gas as she scored her third homer of the series and her twelfth of the season, allowing Guzman to get a run and placing the score 2-0.

Hornets freshman pitcher Kelsey Alcantara allowed three runs as the Thunderbirds hit a homer in the bottom of the first. She also hit Southern Utah batter Kalena Shepherd, giving them a free walk and placing the Thunderbirds in the lead 3-2.

The Hornets went on a tear in the top of the second with six runs as Day and Mejia both hit homers that led to Guzman, Vretzos and sophomore outfielder Aliyah Robles to home plate, placing the score 8-3.

Junior pitcher Alyssa Nunez stepped in to pitch for Alcantara in the bottom of the second and the Thunderbirds scored three hits and three runs in her first appearance of the series, letting the score slowly catch up to 8-6.

In the bottom of the third, Nunez gave up two hits and one run on a single that scored a Thunderbirds runner who was stuck on base, making the score 8-7.

The Hornets’ defense wasn’t allowing any balls to get past the infield in the bottom of the fourth, but the Thunderbirds still found room to secure a run on a single hit, tying the game 8-8.

After allowing five runs, Nunez was subbed out for Bertuccio in the bottom of the sixth, but Bertuccio struggled to end the Thunderbirds’ hitting streak as they hit a homer that scored two players and gained a run on a double hit, making the score 11-8.

Day, who has 30 RBIs on the season, came back to the plate and singled to left field. She found her way on base due to an error from the Thunderbirds’ shortstop. Morfey also singled to centerfield, and it was enough for Day to come around and score giving the Hornets a 1-0 lead.

Nunez quickly stepped in to pitch for Morfey, and she allowed one hit but no runs to end the first inning.

The Thunderbirds added one more run to the score on a sacrifice fly in the bottom of the third setting the score at 5-1.

Nunez struggled to find her momentum in the bottom of the fourth as she walked one batter on a full count pitch and hit two more players. The Thunderbirds scored two more runs on a double play, giving them the lead 7-1.

The Hornets made up for lost time in the top of the sixth as Alexis Parish doubled to infield, Guzman singled through right and the Thunderbirds intentionally walked Day. Sophomore second baseman Rylee Gresham’s single to left field allowed for two runs, scoring Guzman and Alexis Parish and setting the score at 7-3.

Echols came in to pinch run for Gresham, and Day scored on a double hit to left center by Mejia, advancing Echols to third and placing the score at 7-4. Echols clinched her first run of the series on a ground out ball to shortstop by Morfey, giving them a total of five runs.

The third game ended 7-5 in the seventh, and the Thunderbirds nailed down the number two seed in Big Sky.

The Hornets will compete as the number three seed in the Big Sky Conference, and the team is set to stay in Utah to compete against Montana State University on Thursday, May 13, 2021 in the first game of the Conference tournament.

The bracket is set for next week’s #BigSkySB conference tournament! @weberstatesb and @SUUSoftball both earn first-round byes.