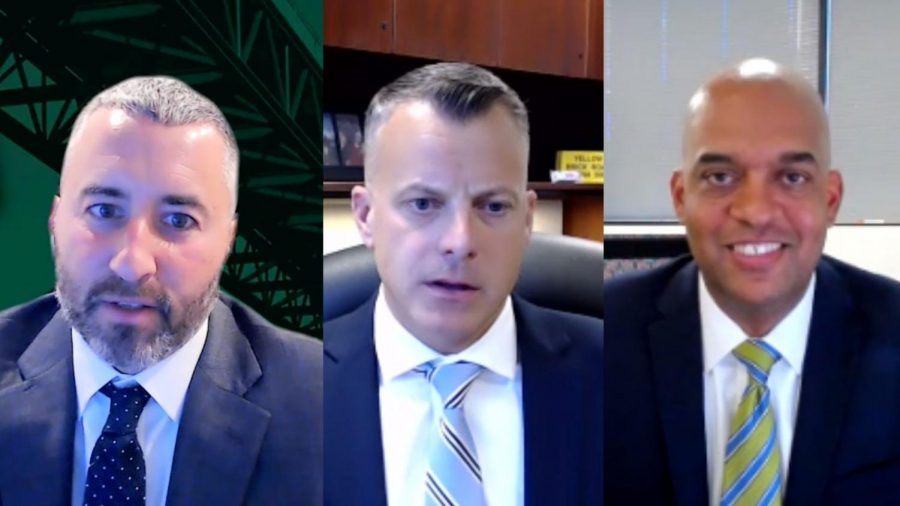 After a nationwide search for a new chief of the Sacramento State Police Department, three live virtual town halls were held this week with three possible candidates for the role.

Members of the university community and The State Hornet spoke to candidates Deputy Chief of Rutgers University police Michael Rein, Sacramento County Sheriff Captain Todd Henry and Sacramento County Sheriff Deputy Chet Madison Jr.
Michael Rein
Michael Rein is the current deputy chief of university police at Rutgers University, presiding over 180 police officers and 340 civilian staff members. Rein’s career serving for the Rutgers Police Department has spanned for over 21 years, and he has been trained as an emergency medical technician for over 25 years.

He holds a bachelor’s degree in criminal justice and political science and a master’s degree in labor and employee relations from Rutgers University.

Rain said the last 21 years of his career was dedicated to higher education on public safety and described university police as “cops plus.”

“There’s a whole host of things that they do beyond the realm of typical policing, so beyond what they are typically expected of the police, from education to crime prevention,” Rein said. “We pride ourselves in all those activities.”

“What we can do with this is we can mirror any building and arrangement, any training environment, any electrical setup, to allow people to practice safety protocols in real time, and train as they would in their actual environment,” Rein said. “I think this has made a safer community, and I know that has broken down some of those barriers that typically exist in the public and their police department.”

When Rein was asked how he would hold his department accountable for their actions and mistakes, Rein emphasized that accountability is important to him.

“All of us as police officers are given an unbelievably precious gift of a reservoir of trust and credibility, and it’s our important task to ensure that we sustain that reservoir and the reservoir is maintained by making a mistake and acknowledging mistakes,” Rein said. “I’ll hold individuals accountable with very high-level expectations. As I mentioned during my presentation, I believe accreditation is a very important task.”

Rein also addressed how he dealt with racial inequity as deputy chief at Rutgers and what he would continue to do to address it at Sac State.

“The police agency should be in a close comparison with that of the population that they serve,” Rein said. “In my experience, I’ve done that with the community oriented review board I mentioned by bringing students, faculty and staff into the hiring process, as well as the promotion process.”

Rein spoke on his deployed training he used at Rutgers called ICAT (Integrating Communications, Assessment, and Tactics), that helped reduce 30% use of force incidents. ICAT is a form of de-escalation training designed to train police officers on how to respond to volatile situations where subjects may not be complacent and don’t possess a firearm. Rein said that training led him to openly support the use of body-worn cameras on officers and referred to them as a “tremendous training tool.”

Associated Students, Inc. President-Elect Samantha Elizalde asked Rein how he would address the concerns of students and collaborate with students regarding the recent student-led movements calling for university police department reform.

“I’m in a position where I have enough experience to be able to bring value to that organization, that campus and those students and the faculty and the staff,” Henry said.

Henry stated he wants to work towards unpacking implicit biases and to have “transparency across the board.” His most emphasized goal was building trust with the campus community.

“If we do that, that critical perception of law enforcement is also going to diminish,” Henry said. “So for me it is a matter of caring and loving for the officers that work for us and making sure that they’re taken care of. But we have to do that in conjunction with the community because they don’t work independent of each other.”

Katherine Jamieson, a professor of kinesiology at Sac State, spoke as a representative of the California Faculty Association. Jamieson asked about divestment from militarized policing and the sheriff’s department’s partnering with Immigration and Customs Enforcement.

Henry said he did not want to speak on topics that he wasn’t “intimately involved in” regarding divestment of militarized policing. He stated that his role as police chief will be building a model the university wants and added that he cannot dictate what police force he may have.

As to Sac Sheriff’s involvement with ICE, he said that documentation status has “no influence” on law enforcement’s decisions.

“As far as the dynamic with ICE, I’m here as Todd Henry, not the sheriff’s representative,” he said. “I can tell you this: the law is 100% clear.  And there’s no question in my mind at the end of the day, documentation status of anybody has no influence on us.”

He emphasized the importance of “trust” and said that law enforcement needs to “protect” undocumented communities.

The murder of 22-year-old Stephon Clark was also brought up during Henry’s Q&A. In 2018, Clark, a Black man, was shot and killed by the Sacramento Police Department in his grandmother’s backyard in Meadowview.

Henry said his agency wasn’t a part of “the incident” with Clark but stated that law enforcement should focus on the “best alternative” for handling incident “escalation.” Henry stated examples could be supervision training or using different tactics.

“It didn’t result in the way we would want,” Henry said. “That is not what anybody would want.  So, how do we collectively from law enforcement, who are not involved in that, look at that system, look at that process, and hopefully pull something out to prevent that occurring in the future?”

On the topic of trust between communities of color trusting law enforcement on campus, Henry said it takes communication and relationship building.

“I can tell a community and a community of color ‘Hey, trust me. I’m here to help.’ But it’s not that easy,” Henry said. “It takes time and commitment and a willingness to be open and to listen to people and hear what they’re saying.”
Chet Madison Jr.
Chet Madison Jr. is currently the chief deputy of the Sacramento County sheriff’s office and has been since January 2017 after being a part of the office since 1996. His current role is with field and investigative services, and has contributed to COVID-19 response.

Madison said if he becomes chief he intends to make sure the learning environment is safe and comfortable for everyone. He referred to himself as a “man of diversity” and praised the diversity at Sac State.

“If I’m not approachable, then this community partnership, it just will not work,” Madison said.

“One of the things that we have to address is that we have to denounce any kind of racism. If that’s occurring, there’s no room for it. We don’t want individuals who support racism. That’s not part of the fabric of our community.”

He said he intends to do so by making himself available and being there to talk to individuals and groups about how comfortable they are on campus.

“Being open, and going to some of these groups and saying, ‘look, I understand you may not feel comfortable’,” Madison said. “No one in my family was in law enforcement, so I’ve been through experiences professionally and personally.”

Madison said that he intends to hold his staff accountable for any potential racist actions by soliciting honest feedback from the community then addressing it immediately and not doing anything to cover it up. It will not be denounced, tolerated or accepted.

“We investigate it thoroughly, and then if discipline is needed, then we deal with the discipline,” he said. “That’s part of leadership not only for law enforcement but I would say that’s part of leadership for the county, here at Sac State [and] President [Robert] Nelsen. I’m certain that would be the expectation from Dr. [Joseph] Castro who leads this entire CSU system.”

Madison, who was an on-duty officer during George Floyd protests, spoke about the death of George Floyd, who was killed by officer Derek Chauvin in May of 2020. He called the incident “despicable.”

He described his feelings toward watching all evidence in the trials as “beyond sad” and believes that Chauvin set law enforcement back for multiple decades.

“He did not value the sanctity of life,” Madison said. “I don’t care what anyone says, when you sit on someone’s neck for that long, as a law enforcement officer there’s right and wrong and that was wrong on all levels.”