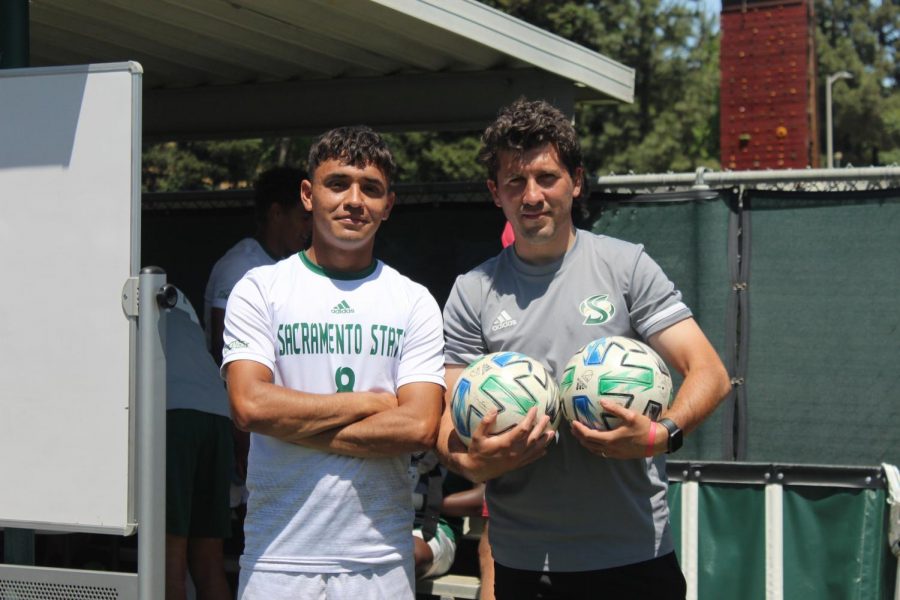 Sophomore midfielder Axel Ramirez (left) and assistant coach Pedro Lupercio (right) at Hornet Field after the spring exhibition game on May 8, 2020. Ramirez said the team was excited to finally get back on the field after a year and a half of no games.

The Sac State men’s soccer team had their fall season canceled twice, first in the fall and then the spring, but they had the opportunity to get back on the field for a short exhibition season in April and May.

The cancelation of the men’s soccer fall sports was due to concerns of COVID-19. Then, the Big West Conference decided in December to cancel fall sports set to take place in the spring. The men’s soccer team finally got to play in a few spring exhibitions in April and May against UC Santa Barbara, UC Davis and Cal Poly San Luis Obispo.

“We were all looking forward to playing in the spring and the fall,” said sophomore midfielder Axel Ramirez. “So, being able to play was good after a year and a half.”

Matt McDougall, the team’s associate head coach, spoke about how the changes have affected the team and how he feels about getting to see them out on the field again.

“That’s fantastic, for the guys to experience something like this [playing games] for so long,” McDougall said. “Obviously they have done a really good job in the classrooms. They’ve had a really good attitude about all of the changes on the fly.”

McDougall also talked about the training process of the team during the cancellation of their fall games and how he felt the team’s performance could improve as they prepared for their matches.

The team trained most of the fall and part of the spring in pods of seven to nine players. Pods were set up in  so that the same small groups of players were always training together to limit exposure and possible transmission of COVID-19. McDougall said it was important for the team to finally get to break out and play all together.

“We missed the continuity of the group,” McDougall said. “It was very isolated between each group, and those groups were getting better, but we needed to get better as a collective group.”

McDougal and several players said that the team needed to work on their “final action” which is finishing goal-scoring opportunities with quality shots on goal.

Ryan Curtis, Sac State’s junior goalkeeper, talked about what it’s been like to play again especially since the passing of their former teammate Arath Chavez, who passed away earlier this year. Curtis described how he and his teammates have been able to cope with the loss of their teammate.

“It was very unexpected and tragic; we kind of took it to heart and we played for him, so I think we kind of played with a little bit of a chip on our shoulder.” Curtis said. “I think he’s watching every single game and rooting us on from above.”

Curtis said the team played very well together but needed to work on their play at both ends of the field both defending against goals but especially on their scoring.

Ramirez said the team was working on a new formation and playing games together was vital for their young team to learn and grow. He said that the team had to work on scoring goals going into the fall, but that they were making progress.

“We created chances, and we’re fine with that for now,” Ramirez said.

The exhibition season and school year is officially over, but the team said it looks forward to continuously training and preparing for next season, where they hope to compete for a Big West Championship.