William “Skip” Bishop and Melinda Wilson Ramey to fill in 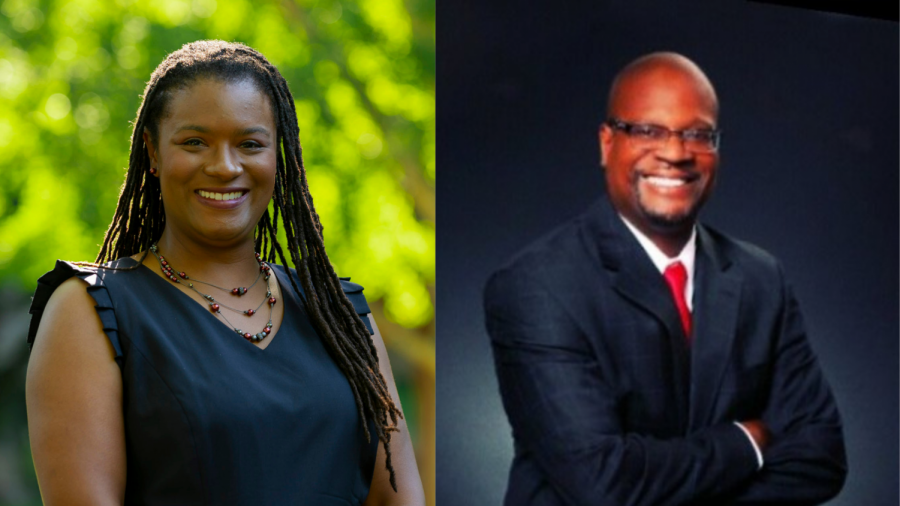 William “Skip” Bishop and Melinda Wilson Ramey will serve as interim vice presidents for Sacramento State’s Division of Inclusive Excellence, according to a SacSend email sent by Sac State President Robert Nelsen on Friday, May 14, 2021. This announcement came two weeks after Nelsen announced current Vice President for Inclusive Excellence Diana Tate Vermeire is leaving the university as of May 21. Photos courtesy of Sacramento State. Graphic made in Canva.

William “Skip” Bishop and Melinda Wilson Ramey will replace current Vice President for Inclusive Excellence Diana Tate Vermeire. The announcement comes two weeks after Nelsen announced Vermeire will leave the university May 21 as she has accepted a new position as the senior vice president of strategy at the Schott Foundation for Public Education.

Nelsen said the search for a permanent vice president will take place over the summer, and the intention is to narrow the search by August 30 to three finalists who will participate in open forums in the second week of September. The university is planning to start nominations for a search committee soon, Nelsen said.

“While we begin the search, we cannot afford to slow the work,” Nelsen said. “I want to thank personally Skip and Melinda for stepping into these important roles at this critical moment to ensure that Sacramento State does not lose momentum in our work in Inclusive Excellence.”

According to Nelsen, Bishop has been at Sac State since 2013, serving as the director of equal opportunity and the university’s Title IX coordinator.

“As Interim Vice President, Mr. Bishop will oversee the compliance side of the Division of Inclusive Excellence,” Nelsen said in the email. “He will continue to lead the University’s OEO [Office of Equal Opportunity] efforts.”

According to a Mother Jones article published in December 2020, Bishop sent an email critical of Sac State’s diversity and inclusion efforts to the Black Staff and Faculty Association in May 2019. The email came after an incident where professor Sanjay Varshney called campus police on his colleague David Moore, who is Black, during a club meeting.

“I apologize in advance, but I am no longer interested in doing anything for this University other than what I’m paid to do,” Bishop said in the email. “The Administration has made it clear to me that diversity and inclusion means nothing unless it is for their benefit. Going forward, I hope this group really takes a hard look at how African-Americans are treated on this campus.”

Mother Jones reported that while exactly what prompted the email is unclear, Bishop reviewed the details of Moore’s incident months before the email.

Nelsen said that Wilson Ramey has been at Sac State since 2005 and began as an assistant professor teaching theatre classes before serving as the chair of the Department of Theatre and Dance from 2012-2017.

Wilson Ramey became the associate dean of student success in the College of Arts & Letters in 2018 and has worked with the Division of Inclusive Excellence on various projects, according to Nelsen.

“In her role as Interim Vice President, Dr. Wilson Ramey will lead the University’s Diversity and Inclusive Excellence efforts,” Nelsen said in the email.

Nelsen also said Bishop and Wilson Ramey will work together to build the division in areas such as bias response.