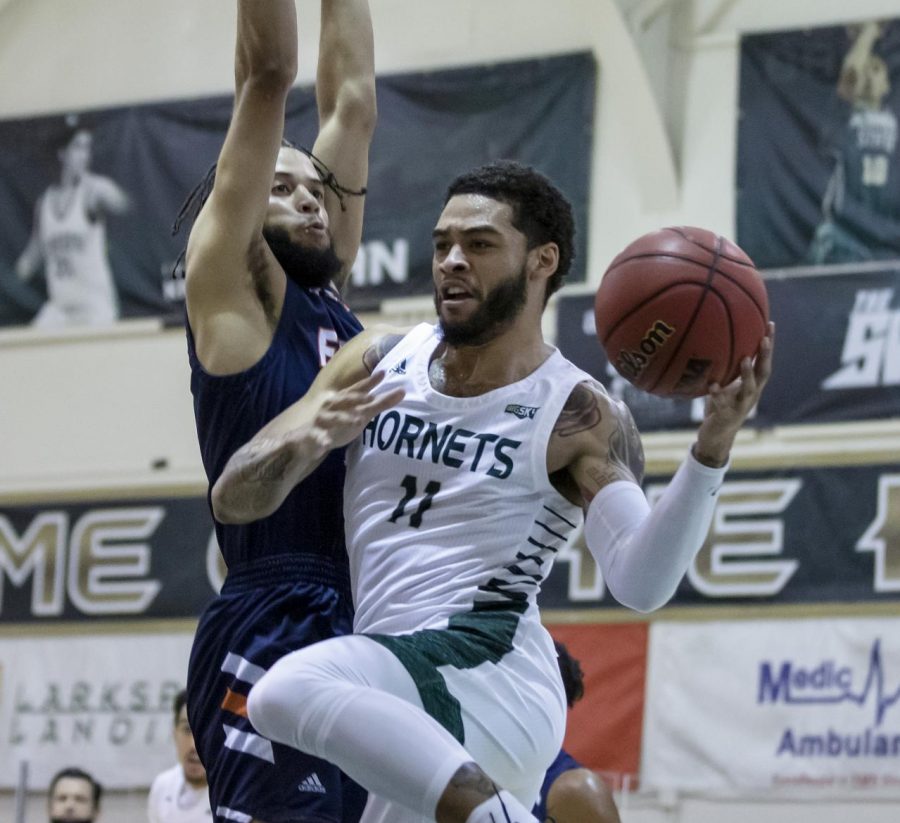 Sacramento State’s Brandon Davis (11) passes the ball around Fresno Pacific A.J. Kirby (3) during the second half in the non-conference game at the Nest at Sac State in Sacramento, California, Jan. 3, 2021. Davis is going pro overseas to be the newest point guard to be signed onto the Mets de Guaynabo basketball team.

Sacramento State alum Brandon Davis, who is graduating this semester, will be beginning his professional basketball career overseas as he has signed a deal in the Puerto Rican league.

Davis will be playing his first game on July 8 as a member of the Mets de Guaynabo in the Baloncesto Superior Nacional league.

Davis, originally from Florida, began his college basketball career in Santa Barbara where he played for a year before transferring to Sacramento State. Davis said he transferred to Sac State because he appreciated the support from his coaches and saw the team’s potential in winning tournaments.

The draft process for the BSN is similar to that of the NBA, Davis  said.

“[You] enter your name to the draft among a list of players that are eligible to be drafted, and you know, scouts do their homework on who they want and teams, they reach out to agents and all this,” Davis said. “They watch the synergy, clips, you know, highlights, they do their homework on numbers you’ve had and all that. So they make their decisions based on that.”

Clearly, Davis’s stats spoke to the scouts. For the 2019-2020 season Davis was a starting point guard in all but one of the 30 games and the only reason he wasn’t 30 for 30 was because he was nursing an injury. Moreover, Davis has a FT% of 71.4 and was one of the team’s best on-ball defenders.

“Brandon worked hard on his game,” Walker said. “He came in as a guy who struggled from shooting from the perimeter and improved into a 37% 3-point shooter. He has been one of our best on ball defenders this program has had.”

“BD [Brandon Davis] is a pass first point guard,” McCullough said “He’s a real, true point guard. It’s great being on the floor with him because he goes for the open player, the open pass, he’s not looking for the shot first.”

McCullough said Davis’ work ethic and drive to improve have set him on the path to a professional career.

“I’ve known BD for a very long time now, so watching him grow, watching him get better is great,” McCullough said.  “His shot wasn’t the best at first, but he really put a lot of work into it, so it really played out.”

As the departure date to go to his new team approaches for Davis, he said he was thankful for the small but important things that go into a successful basketball career including his coaches, his teammates, staying relatively injury free and of course, his family.

“To get here, I mean, it took a lot and my family was a huge support system in that,” Davis said.

Although his career as a professional basketball player is just beginning to take shape, Davis said he is also focused on the future and sees himself embarking on several business ventures and will be using his basketball career as a springboard to them.