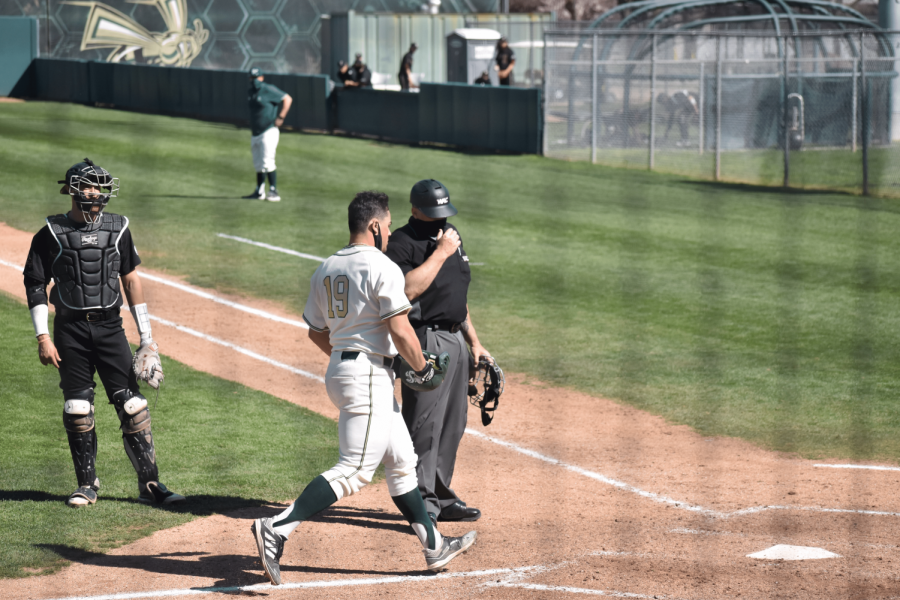 California Baptist University entered the weekend 21-3 in Western Athletic Conference play so a 2-2 series split on the road is nothing to sneeze at, but with just four conference games remaining the Hornets’ chances of securing the WAC title are starting to dwindle as they trail both CBU and Grand Canyon University by four wins.

Coming off last weekend where Sac State narrowly avoided being swept at home while scoring just nine runs in four games, the Hornets nearly averaged nine runs per game this series. (8.75 runs over the four games)
Game 1: Hornets outlast Lancers in 14-11 bonanza
In a wild opening game of the series the Hornets got a road victory over the Lancers on an action packed Friday afternoon. The Hornets got the early lead on a Dawsen Bacho sacrifice fly before junior Brady Rodriguez (7-2) allowed three runs to the Lancers in the bottom of the second to give CBU a 3-1 lead.

The Hornets piled on runs in the third and fourth innings, totaling 10 runs over the two frames punctuated by an emphatic grand slam by Sac State’s all-time RBI leader, senior Matt Smith.

Sac State added another run in the fifth before adding two more in the seventh, but the Lancers struck back to make things interesting.

The Lancers added three runs in the sixth inning before their big hit of the ballgame, a seventh inning grand slam by Mitchel Simon which made it a 14-11 lead.

The Hornets brought in reliever Jack Zalasky (4-1) who recorded the final six outs allowing just one walk over the eighth and ninth innings while striking out three.

Offensive standouts for the Hornets include Smith, who went 4-4 with a walk and five RBIs, junior Nick Iwasa who went 3-5 with two runs and two RBIs, and senior Ryan Walstad who went 2-4 and also had two runs and two RBIs.
Game 2: Randall roughed up as Hornets lose 6-1
Sac State dropped game one of the doubleheader on Saturday as pitcher Scott Randall (6-2) received his second loss of the season. The Hornets’ top pitcher struggled, going only three innings allowing five runs while striking out five. Randall’s start marked his shortest appearance and the five runs were the most he has allowed in a start all year.

After Randall, the Hornets turned to freshmen Max Pettey (0-0) and Wesley Harper (0-0) as they pitched the last three innings for Sac State allowing just one run combined.

The Hornets offense totaled just one run on six hits, the run coming on a Smith RBI single scoring Walstad.

Lancers’ starter Bryan Pope (7-4) went 4 2/3 innings allowing one run while striking out six Sac State batters.
Game 3: Hornets fall 7-6 in extra innings despite late comeback
The Hornets found themselves trailing 6-3 heading to the ninth inning, having put up just four runs in the first 14 innings of Saturday’s double header. A walk, an error and a single loaded the bases for Smith, who had launched a grand slam in Friday’s ballgame.

Smith didn’t unload the bases but he knocked in two on a base hit to bring the game within a run. Junior Dylan McPhillips then hit a sacrifice fly to tie the game at six.

Jack Zalasky (4-2) pitched a 1-2-3 bottom of the ninth to send the game to extra innings. The Hornets missed an opportunity in the 10th inning however, squandering runners on first and third with nobody out. Freshman Isaiah Parker struck out, freshman Jack Bollengier bunted it back to the pitcher and then Zalasky struck out to end the inning.

In the bottom of the 10th the Lancers capitalized where the Hornets could not, with the bases loaded, Ulises Caballero singled home the winning run off Zalasky to win it for CBU.

Freshman Eli Saul (1-3) pitched well while going five innings giving up only two runs, keeping the Hornets in the ball game. Sophomore Rylan Tinsley pitched a scoreless frame before freshman Kevin Haynes allowed four runs over two innings, two of those coming on a two-run homer from Mitchel Simon, his second of the series.

Despite the come-from-behind efforts, the Hornets still lost, as they dropped their sixth game of their last eight.
Game 4: Hornets beat up Lancer pitching, win 14-1
California Baptist’s 3.75 ERA is the lowest in the Western Athletic Conference, but on Sunday the Lancers pitching staff had no answers for the Sac State offense.

Walstad started the show for the Hornets by tagging a two-run homer in the first to begin the scoring. Two innings later Matt Smith added a two-run homer of his own to make it a 4-0 Hornet lead.

In the fifth inning Bacho connected for the Hornets third two-run home run of the ball game pushing the score to 7-1, but the Hornets did not stop there. In the ninth junior Steven Moretto hit Sac State’s fourth home run, this one a three-run shot to make the lead 13-1. Junior Keith Torres doubled in another run to conclude the offensive onslaught.

On the mound sophomore Travis Adams (6-2) threw a complete game. Adams, coming off his worst game of the season against Grand Canyon University, allowed only one run over nine innings and just six Lancer hitters reached base.

The story for the Hornets on Sunday were the bats however as Walstad and Bacho both went 3-5 with a home run a piece while Smith improved his batting average to .388, tops in the WAC.

The Hornets will now take a break from conference play as they take on the University of San Francisco on Friday in San Francisco, host USF for a double header on Saturday at John Smith Field before returning back to San Francisco Sunday to wrap up the series.