The Hornets are 31-19 with one series before WAC playoffs 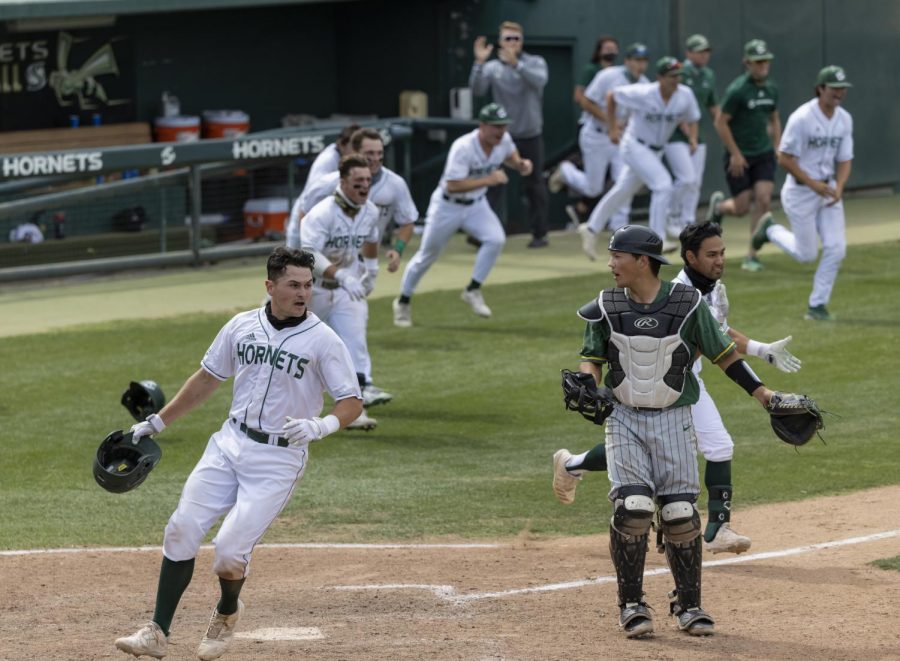 Sacramento State junior Dawsen Bacho crosses home plate as the team rushes the field after the walk-off win in the bottom of the seventh inning in game one against the University of San Francisco at John Smith Field at Sac State on Saturday, May 15, 2021. Moretto had three at-bats with one hit.

The Hornets notched wins number 29, 30 and 31 of the season during a four-game weekend series against University of San Francisco, in which both teams hosted two games apiece.

The non-conference series gets the Hornets ready for their last series of conference play in the coming weekend versus University of Texas Rio Grande Valley. The Hornets are now 31-19 on the year, and Sacramento State has clinched its ninth straight 30-win season, with the exception of the pandemic-shortened 2020 season in which Sac State went 9-7.

The most welcoming sign of the weekend was the pitching staff’s return to form, allowing just 3.75 runs a game this series compared to the 6 runs a game they allowed last weekend to California Baptist. Eli Saul and Scott Randall both had scoreless starts. The bullpen was also dependable for Sac State, going 14 innings over the weekend allowing just two earned runs.

Friday: Hornets baseball squeaks out 2-1 win versus University of San Francisco
The Hornets pitching staff kept the Dons off-balance Friday, allowing just six baserunners in the game, leading to a 2-1 Sac State win on the road.

Randall (6-2) got the start going five shutout innings while striking out nine.

Brady Rodriguez (8-2) came into the game in the sixth inning. He gave up the only run of the game but went three innings and gave the ball to Jack Zalasky (5-2) who got the final three outs, two by strikeout, and picked up the save.

Dylan McPhillips doubled in Dawsen Bacho to give Sac State a 1-0 lead in the second inning. The score stayed until the sixth inning when USF’s Jack Winkler hit a home run to even the game.

Put it on the board! Dylan McPhillips puts the Hornets ahead early with a two-out RBI-double in the second. #StingersUp

Hits were hard to come by for the Hornets as they tallied only six, but none were more important than outfielder Trevor Doyle’s go-ahead single in the eighth inning to score Keith Torres, who reached on an error by the Dons to start the inning.

The Hornets bullpen was able to hold the lead to pick up the Hornets’ 29th win of the season.

Friday’s win was the eighth of the year for junior pitcher Rodriguez, who is now tied for the WAC lead with California Baptist’s Chris Burica and Grand Canyon University’s Carter Young.
Saturday Game One: Hornets storm back from down 5, win 7-6
The Hornets got their 30th win of the season in walk-off fashion at John Smith Field on Saturday after coming back from being down 5-0.

Head coach Reggie Christiansen was ejected for the game by the umpires for arguing a call at first base.

The Dons got off to a quick start in the seventh inning of the first game of the doubleheader, scoring the game’s first five runs in the first three innings, including homers by Ryan Davis and Christian Stapleton.

In the bottom of the third, the Hornets got to work erasing the deficit, getting on the board with a run-scoring Matt Smith single and an RBI double from Ryan Walstad.

The Hornets then tied it in the fifth on a three-run “Bacho Bomb” to even the score at 5.

The Hornets then took the lead in the sixth on a Doyle double, which brought home Dylan McPhillips to put the Hornets up 6-5. The lead was short-lived though, as the Dons tied it right back up in the top of the seventh off of an error by third baseman Moretto.

In the bottom of the inning, a lead off double from Bacho set the table, and a sacrifice bunt moved Bacho over to third. The next batter Moretto was walked intentionally, bringing up pinch hitter Logan Denholm. Denholm shot one down the left field line to score Bacho and get the Hornets the win.

It’s a walk-off! Sacramento State comes from behind and wins, 7-6, against San Francisco. A thrilling win #30 for the Hornets! #StingersUp

Saturday Game 2: Hornets get just one hit, lose 8-0
USF pitcher Jesse Baron allowed just one hit in his five innings of work, striking out five Hornet hitters. Then the Dons’ bullpen came out and did even better than Baron, guiding USF to an 8-0 victory on the road against Sac State.

The Dons’ pen went the final four innings allowing no base runners while striking out seven as Chase Minor and Grant Nechak combined with Baron to shut down Sac State.

Freshman Kevin Haynes (1-3) got the start on the mound for the Hornets and went four innings, striking out four while allowing three runs. Wesley Harper (0-0) then came in and allowed four unearned runs, and an error by Sac State’s Martin Vincelli-Simard proved to be a costly one. Cole Tremain (0-0) got the final six outs for the Hornets.

The lone hit for Sac State was a double by Walstad as the senior picked up his 59th hit of the season. Walstad’s batting average sits at .355 for the season.

Sunday: Hornets shut out Dons 4-0 to take the series
Freshman pitcher Saul (2-3) started on the mound and pitched the best game of his collegiate career as the Hornets won 4-0 in San Francisco to wrap up the series.

Saul went eight scoreless innings to close out the series versus the Dons. He gave up four hits while striking out six.

Sunday’s start marked the longest of Saul’s season, getting him his second win on the year. Closer Zalasky came in for the ninth to get the final three outs and got the Hornets their fourth shutout of the season.

Sac State got on the board in the first on an RBI single by Bacho, which scored Walstad to put the Hornets up 1-0, which proved to be all the pitching staff would need.

Smith sent a solo shot past left center to extend the lead to 2-0. Then in the top of the eighth, Dylan McPhillips doubled to left to score two and double the Hornet lead to make it a four-run lead.

Goodbye, baseball! This one gets out in a hurry as Smith puts the Hornets up, 2-0, with his team-leading eighth home run of the year. #StingersUp

The Hornets were actually outhit 5 to 4 in Sunday’s ballgame, but the difference in the hits was that just one of the Dons’ hits went for extra bases while three of the Hornets’ four got extra bases.

The Hornets return to WAC play this weekend to conclude the regular season for Sac State. The series begins Friday at 5 p.m. at John Smith Field and is available to stream here.