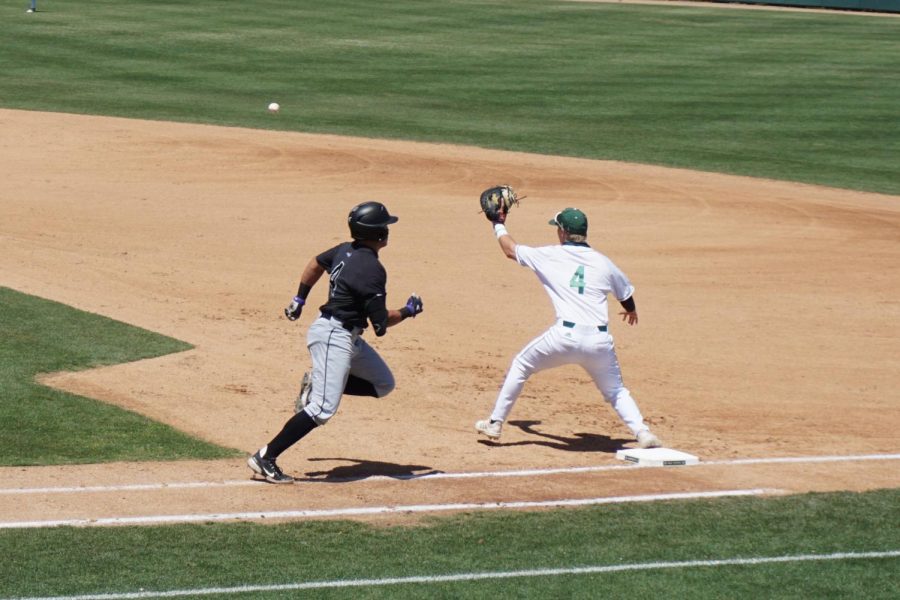 Senior Ryan Walstad receives a ball at first base in the Hornets’ home game against Grand Canyon University on Sunday, May 2, 2021. In five at bats, Walstad claimed all three of Sac State’s RBIs during the game.

It seemed to be a good matchup between evenly ranked teams, though it did not turn out that way for the Sacramento State men’s baseball team.

The Hornets were clearly outmatched by the Grand Canyon University Lopes this weekend, being outscored 35-9 in the four-game home series. The Hornets lost games by 10, five and 12 before managing to squeak by Sunday with a one-run victory. The outcome puts the Hornets in a fairly distant third place in the conference with eight games remaining.

Heading into the weekend, the team records looked similar. Sac State baseball was 25-13 with a 16-8 Western Athletic Conference record, and the Lopes were 23-15-1 with a 16-4 in the WAC.

The issues for the Hornets were teamwide as the pitching staff had an ERA of 9.00; their season average was 4.51 heading into the series. The offense was not much better: after scoring four runs in the first inning of the series, the Hornet hitters mustered just five runs in the next 29 frames.
Friday: Hornets lose 15-5 in series opener versus Lopes
After six straight games on the road, the Hornets returned to John Smith Field on Friday to meet with Grand Canyon University. The Hornets were hitting early as freshman Hunter Dorraugh singled in two runs, then Steven Moretto and Keith Torres added RBI singles of their own to put Sac State up 4-0.

Two-out, two-run base hit for Dorraugh and the Hornets are up early! #StingersUp

The Hornets had sophomore Travis Adams (5-2) on the bump; Adams struck out a career high 13, his last outing en route to becoming the WAC pitcher of the week. After a clean first inning for Adams, he quickly found himself in trouble in the second inning when Grand Canyon’s Brock Burton hit a two-run homer. Adams then gave up another run on a Channy Ortiz RBI single to trim the Hornet lead to one.

Sac State then got a run back in the second, adding a run on a Ryan Walstad sacrifice fly and boosting the lead to 5-3.

Adams returned to the mound in the third as Burton left the ballpark for the second time in the game, this time with the bases loaded. The grand slam put the Lopes on top 7-5, but the Lopes weren’t done, as they added two more runs before Adams was pulled in the fifth.

Adams allowed nine runs in the ballgame, the most allowed by Adams all season. His previous high this season was five.

From there, the Lopes scored six straight runs before the game was called in the seventh due to a mercy rule from GCU being up 10.
Saturday Game 1: Hornets fall again to Lopes 6-1, drop third game straight
The Hornets looked to turn things around after the 10-run defeat Friday, and head coach Reggie Christiansen turned to Kevin Haynes (1-2) for his second start this week. The freshman went 3 2/3 innings, allowing three runs.

In the third inning, Hornets’ junior Nick Iwasa singled home Chris Gonzalez to put Sac State on the board.

Burton stayed hot for the Lopes, doubling home a run in the first and singling one home in the fourth. GCU’s Cade Verdusco singled home another to put GCU up 3-1.

After Haynes, the Hornets turned to Cole Tremain (0-0), who went 2 1/3 innings. Tremain’s big blemish of the ballgame came in the fifth when the Lopes’ Elijah Buries launched a three-run homer to give GCU the 6-1.

The Lopes’ starting pitcher Pierson Ohl (6-1) played all seven innings, allowing just the lone run as he struck out six Hornets to give the Lopes the victory.
Saturday Game 2: Hornets get down early, fall 12-0 to GCU
For the fifth time of the season, the Hornets were shut out Saturday evening as they fell 12-0 to GCU.

The game quickly became out of hand as the Lopes scored all 12 runs in the first three innings.

Freshman Eli Saul (1-3) got the start, only managing to get five outs before the Lopes chased him from the ballgame. Saul allowed nine runs (six earned), surrendering eight hits. The Hornets then brought in Travis Martizia (2-2) who got the final out of the second inning but not before allowing two runs of his own.

Wesley Harper (0-0) pitched the last five innings for the Hornets, righting the ship a bit as he allowed just one run.

For the Hornets, senior Ryan Walstad went 2-2 with a couple of singles for Sac State.
Sunday: Walstad walk-off double wins it 3-2 for Hornets
After a very tough start to the weekend, Christiansen turned to ace pitcher Scott Randall (6-1) to calm the storms of the Lopes’ offense. The right-hander was exactly what the Hornets needed, going six innings allowing just one run and striking out eight with one walk.

On the season, Randall has put up an absurd average of 15.8 strikeouts to each walk, and after Sunday’s performance, is tied with the Lopes’ Ohl for the WAC lead in strikeouts.

The scoring started in the second inning, where GCU’s Burton doubled in a run to give the Lopes an early lead.

Walstad evened the game in the third with an RBI single that scored Gonzalez. The scoring resumed in the ninth where the Lopes’ David Avitia singled in a run off of Jack Zalasky (4-1) to give GCU a 2-1 lead.

After losing the first three of the series, the go-ahead single for the Lopes seemed like the finishing blow for the Hornets, but Sac State wasn’t quite finished.

The bottom of the ninth began with a Torres strikeout, but following that, Iwasa and Trevor Doyle were both walked, sending Walstad, who drove in the Hornets’ only run of the game at this point, to the plate. After two straight walks, Walstad jumped on the first pitch of the at bat, smacking it to right field. Doyle and pinch runner Isaiah Parker dashed around the bases. The throw to the plate was just late, and the Hornets got to celebrate a 3-2 victory after a woeful weekend.

Ballgame! Ryan Walstad walks it off for the Hornets with a two-run double in the ninth! #StingersUp pic.twitter.com/iOtTsgIVfa

The Hornets return to action Friday as they take on first place California Baptist University down in Riverside. Friday’s game starts at 5 p.m. and is available to stream here.