Does ‘The Falcon and the Winter Soldier’ ending mean an MCU ‘reboot’?

Two copy editors duke it out in a ‘Civil War’ 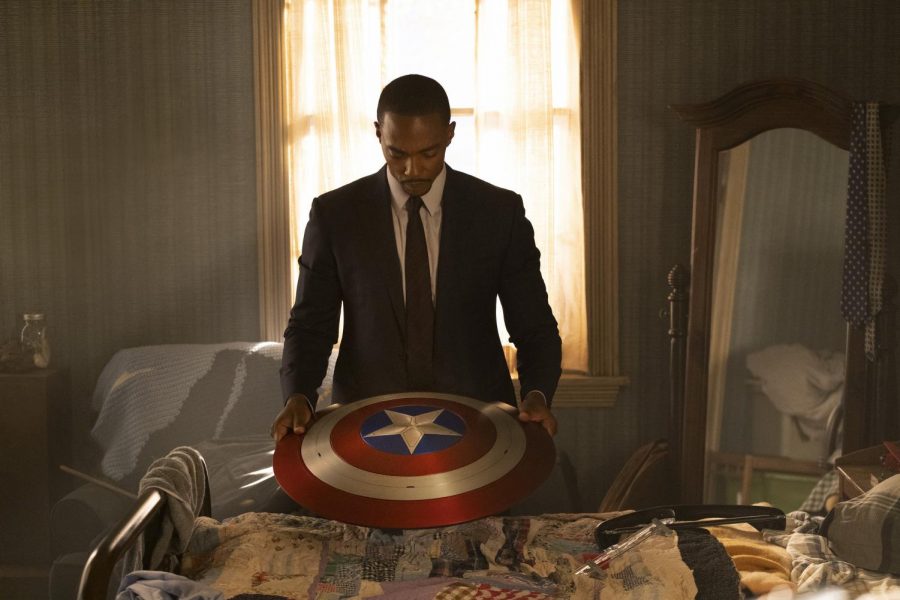 Anthony Mackie plays Falcon/Sam Wilson in Marvel Studios' “The Falcon and The Winter Soldier” on Disney+. Our copy editors debate over whether previously minor characters taking up major mantles is the direction the franchise should go. Photo by Chuck Zlotnick. © Marvel Studios 2020. All Rights Reserved.

Disclaimer: Spoilers for “The Falcon and the Winter Soldier” and really everything in the MCU up to this point.

With the finale of “The Falcon and the Winter Soldier,” the future of the Marvel Cinematic Universe is changing. “Captain America 4” is now in development with writer Malcolm Spellman, and the role will be helmed by Anthony Mackie. The story will be a continuation of the finale of “Falcon” and focuses more on the struggles of humanity after the blip.

The Marvel Universe is expanding. Different actors seem to be taking over the roles of certain well-known heroes. On the horizon, we are likely getting a new Black Panther in “Black Panther: Wakanda Forever,” and the mantle for Captain Marvel is seemingly expanding in “The Marvels.” Already there are talks of a different Black Widow in Florence Pugh and a new female Hawkeye in Hailee Steinfeld.

As these releases are fast approaching, our copy editors debate over whether this incoming blockbusting is getting stale or if it’s exactly what the superhero franchise needs.

Jordan Parker: The Marvel Universe is simply one of the greatest things to ever exist in cinematic history. I’m so blessed to be able to say that I grew up in the Golden Era of Marvel. However, I’m not quite liking where this franchise is going if any of the recent Disney+ series were supposed to give me a preview. First of all, “WandaVision” fell flat. If I wanted to watch “I Love Lucy,” I would’ve flashed back to my childhood when it was on CBS late at night.

I miss the action of Marvel. I think what they’re trying to do now is too much storyline and not enough action. I want to see people get thrown into skyscrapers, not sit on the couch in an imaginary world. I just feel like Marvel is losing its touch a little bit, but I will say I’m going to try to give it another chance with the new “Loki” series coming out next month.

Alex Muegge: I 1,000% agree with you there. I will say I don’t think the Golden Era of Marvel is over. I really feel as though it is just getting started. Everyone is getting batons handed to them: most recently Captain America. It’s beautiful. Now, Marvel can let loose.

Iron Man was beloved, and by killing him off in “Endgame,” it set the tone for Phase Four. Anything can happen. A regular man without superhuman abilities can be Captain America, Evan Peters can show up in “WandaVision,” they can explore timelines with “Loki” or do prequels again like “Black Widow.”

We were so used to the structure of the MCU that we thought these heroes were untouchable. This jumpstart of the new age is exactly what Marvel needed. No one is safe, the tone is changing, and we can do existing characters justice. Right now, I would endorse the Disney+ TV shows over the movies.

I am somewhat a fan of the comics, and my favorite characters leading up to the “Endgame” climax were Vision and Captain America. Marvel spent time fleshing those characters out over the last four months and earned my trust to follow them into the next phase.

Jordan: I like your optimism Alex, BUT this is where I have to disagree with you. When heroes die, that should be the end of it. I grew up with Chris Evans as Captain America, and that’s the way I always expected it to be. This is no offense to Anthony Mackie — he’s had a tremendous career and excels in everything he does, but I just don’t know if Captain America should be his next step.

The greatest thing about Marvel was the structure. I think Marvel should take a page from a franchise like Star Wars, which has started to fill in its timeline with prequels BUT is not replacing beloved characters in order to keep them going. I see what you’re saying about the need for a new direction but Marvel needs to take extra time to evaluate what that truly looks like rather than doing it on the fly.

Alex: What the Marvel Universe is doing right now is not “rebooting,” and they are continuing with existing characters. Val Kilmer and George Clooney were recasts for Michael Keaton, but it was in an existing franchise created by Tim Burton’s “Batman” film in 1989. “Batman: Forever” and “Batman & Robin” were in the same franchise, and you can tell because Chris O’Donnell portrayed Robin in them both. Michael Gough, the actor who played Alfred, was also present in all four movies serving Keaton’s, Kilmer’s and Clooney’s Bruce Waynes.

A reboot implies that one franchise ended and another began. The Burton franchise started with Keaton’s first film in 1989 and ended on Clooney’s in 1997. A new franchise began eight years later in 2005 when Christopher Nolan casted Christian Bale as the caped crusader. This franchise had new direction, new actors, a new production team and a new through line.

Most importantly, it had no character connections to the previous films. Bucky fought by Cap’s side in the Chris Evans “Captain America” trilogy and continues to fight next to Sam Wilson. In this case, Bucky allows us to make the Alfred connection from the Batman example. Since Bucky is present in both projects, a “Captain America” film and a season of “The Falcon and the Winter Soldier,” this does not constitute an MCU reboot.

Furthermore, each of the sequel “Star Wars” films cycled out Han, Luke and Leia with Poe, Rey and Finn respectively. Han and Poe are both rugged pilots with questionable alliances, Rey and Luke are both Jedi with extremely high midi-chlorian counts related to somebody on the Dark Side, and Leia and Finn are both force sensitive humans who got caught up in the Rebellion/Imperial political war (i.e. a princess and a stormtrooper).

They filled in archetypal roles but continued an already existing franchise exactly like Falcon and Cap. Your argument that Star Wars didn’t replace its main characters is invalid.

Jordan: This is totally a reboot. How is replacing all of the main characters of the past decade not considered a reboot? Technically yes, the franchise didn’t end, but that’s only because it’s Marvel. Why would Marvel end? I think it’s important to look at the fine details here, which are that they are bringing in new heroes to replace the old ones, which in my book signals the end of an era.

Just because Bucky was by Cap’s side, that doesn’t mean it can’t be a reboot. What about which Spider-Man is going to be fighting next to the new Cap? Or how about the new Black Widow? I just don’t understand what they’re doing at this point.

I didn’t ask for Marvel to replace their best heroes, and I don’t think the fans are going to enjoy what they have planned because what’s left for them to make money on after “Black Panther: Wakanda Forever” or “The Marvels?”

Alex: There were over 20 films that led to the climax of “Avengers: Endgame.” Every single one of those films was connected. For example, Falcon cameoed in “Ant-Man,” Thanos appeared first in “Avengers,” then “Guardians of the Galaxy,” etc. I know you agree because what made “Endgame” so climatic was the culmination of 10 years of storytelling prior to it all.

The fact that a more minor character such as Sharon Carter can appear as an ally to Steve back then and now develop more into a corrupt anti-hero implies that there maintains a link to the previous story. Furthermore, we watched Steve hand Sam the shield in the third act of “Endgame.”

How could you possibly argue that they are rebooting the franchise when Sam has Steve’s blessing? Paul Walker wasn’t in “Tokyo Drift” — does that mean that movie doesn’t take place in the “Fast and Furious” franchise? No, because Dominic Toretto makes a cameo and references Han, who then appears in the next installment.

The MCU is a behemoth. I will likely die long before its franchise needs a reboot. What we are seeing unfold in the next two to three years is a continuation of a rich narrative that began in 2008 when Tony cruised through the mountains of Afghanistan to the electrifying sound of “Back In Black” by AC/DC.

Is the MCU being rebooted?
Yes
No
Created with QuizMaker