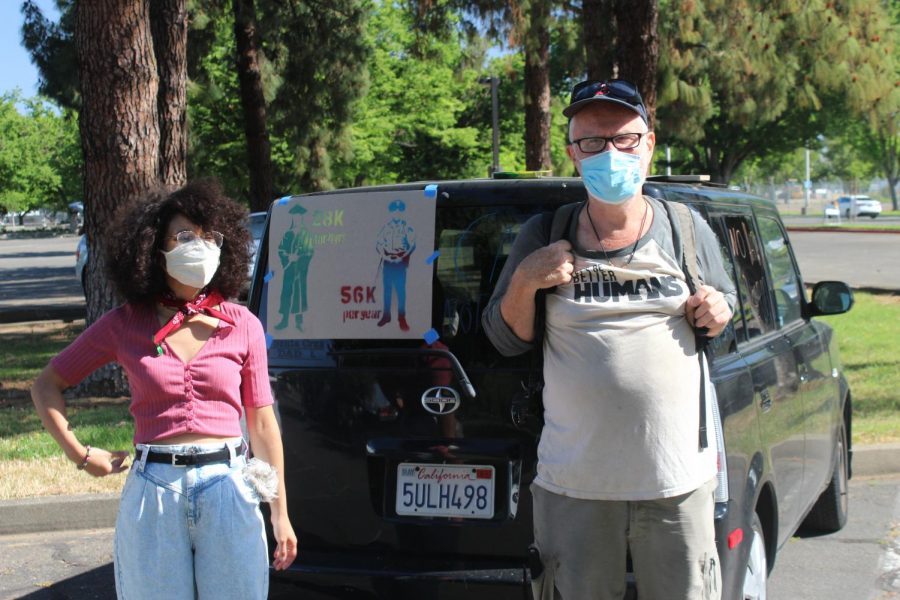 Sociology student at Chico State Melys Bonifacio-Jerez, left, stands next to protester Guillermo Marsh at the May Day Car Caravan in support of defunding university police at Sacramento State’s Police Department on Saturday, May 1, 2021. CSU Students For Quality Education demanded removal of university police on the 23 CSU campuses during the Caravan.

Seventeen cars decked out in paint and signs with declarations like “No harm disarm” and “CAPS not cops,” referencing an acronym of Counseling And Psychology Services, drove down State University Drive at 10 a.m. honking their horns while one student leaned out of his car with a bull horn and chanted “no cops, no prison, total abolition.”

CSU Students for Quality Education and the California Faculty Association hosted a May Day Car Caravan at Sacramento State campus Saturday in support of defunding university police across all California State Universities. SQE and CFA are statewide organizations with chapters at all 23 CSU campuses.

Students, faculty members and community members from around Northern California started their route by the Sac State Police Department then circled around the entire university. At the start of the caravan, Sac State police officers were stationed around campus to monitor the demonstration, including inside Parking Structure 3.

There are 10 @sacstate police officers stationed around campus to monitor the protest, according to one of the officers. pic.twitter.com/8nCc9MfM6b

On May Day, also known as International Workers’ Day, demonstrations are often held across the U.S. to advocate for issues regarding topics such as immigration and police brutality.

Sac State SQE intern and English major Carmen Martinez started off the event, declaring SQE’s demand to remove police from CSU campuses and leading attendees in chants like “CSU presidents, hear us rise, pass these demands, so that we can thrive.”

“It does not make sense that a regular average salary of a police officer is $56,000 per year while you are paying so much for your education just so you can be terrorized over and over again,” Johnson said.

While the caravan in Sacramento was held for all students, faculty and community members in Northern California, CFA also hosted another demonstration in Los Angeles for Southern California, according to CFA Capitol Chapter President Margarita Berta-Ávila.

“We are definitely in this collaborating with them together,” Berta-Ávila said about CFA and SQE. “But I would have to say that the students really took the lead in organizing.”

SQE intern and Sac State biochemistry major Yahaira, who requested her last name not be used, said that considering the killing of brown and Black people by police, it is almost impossible for Sac State to implement an anti-racist framework with the presence of police on campus.

“We’ve explained that the police themselves are inherently a racist institution,” Yahaira said. “So we want to really just have this car caravan to bring out as many students and community members to demonstrate that this is something that we need actually to take lead in.”

Martinez said that she wants to defund university police in favor of funding alternatives to police and more preventative measures like increased mental health services and programs like Project Rebound, which provides support to formerly incarcerated students.

“I think that the biggest thing for us is that we see Sac State investing significantly more in our police than they are in faculty and student resources,” Martinez said.

The State Hornet previously reported that the 2020-2021 budget for the Sac State Police Department is approximately $6.6 million, a slight decrease from the department’s $6,991,644 in total expenditures for 2019-2020 due to a deficit in the university’s budget as a whole.

Members of SQE at Sac State started the year having meetings with Associated Students, Inc. and other campus organizations about defunding university police according to Martinez. She said members have attended every CSU Board of Trustees meeting this year and have met with Interim Dean of Student Affairs Bill Macriss to discuss restorative justice at Sac State.

With the announcement of Sac State Police Chief Mark Iwasa’s retirement and the search to fill his position, SQE has criticized Sac State for involving Vice President of Bob Murray & Associates and former Walnut Creek Police Chief Joel Bryden in hiring the university’s next police chief because of his handling of an incident in which his officers killed a 22-year-old in 2012.

A SacSend email sent out Saturday said that Bob Murray & Associates holds the responsibility of sourcing candidates for the position and does not have decision making authority.

“So they’re paying someone who has a history of being a police chief in Walnut Creek and has a past in their district with a citizen being murdered by four police officers,” Martinez said. “And he’s been asked about his opinion on that and he believes that they handled it very well. So it’s pretty eyebrow-raising to see this is a person who is going to be hiring Sac State’s new chief of police.”

The East Bay Times reported that in response to the 22-year-old’s death, Bryden said “No officer wants to shoot to kill” and “Officers don’t shoot and kill anyone unless they are absolutely forced to.”

Melys Bonifacio-Jerez, a sociology major from Chico State said they came to the caravan in solidarity with other students and SQE students as well as community members to demand that the CSU defund and disarm the university police department.

“What we are noticing is that student resources and student retention programs, they’re getting less funding,” Bonifacio-Jerez said. “But our university police departments, not just from where I’m from at Chico State, not just here at Sac State, but throughout all 23 CSUs, their budgets are overfunded while student programs are underfunded, so that’s why we say CAPS not cops.”