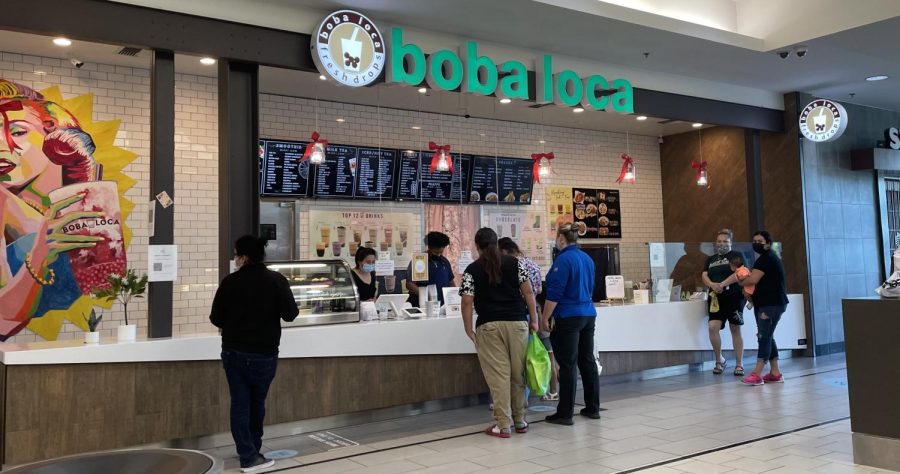 Customers order from Boba Loca inside the Arden Fair mall May 5, 2021. Workers, including assistant manager Lillian Phan, on the left behind the counter, push tea out to waiting customers.

Sitting outside of the Arden Fair Mall as the sun sets, Lillian Phan, the assistant manager for Boba Loca and a Sac State alumna, thought back to her three years of service at the location and how things have been changed by COVID-19.

She and her staff were worried they wouldn’t make it past the first initial shutdowns, she said.

Now, with businesses starting to open up, they are simultaneously dealing with an influx of customers and one of the pandemic’s latest supply victims: tapioca used to make the chewy boba balls.

Recently, Phan’s staff has repeatedly had to call security on customers upset about being unable to get their boba fix, she said.

Imports of tapioca starch have been heavily affected by the global shipping slowdown caused by the March closure of the Suez Canal, affecting shops like Phan’s and others across the region.

The Ever Given, the cargo ship that was lodged in the canal, may have been cleared away, but the effects of the blockage and pandemic-related shipping delays are still being felt around the world and in Sacramento boba shops.

Phan said that boba was their most popular item and that customers would ask for double, triple and even quadruple scoops of the tapioca-based topping, a request that Phan has had to tell customers cannot be filled.

“We’ve been telling them, ‘Oh, we can’t do that many scoops anymore,’ and sometimes they’ll get mad at us,” Phan said. “[The staff] have to deal with the customers being upset with them, and I feel for them.”

Frequent customer complaints on limiting evening sales and the amount of boba customers can receive has stressed out her coworkers and caused their mental health to slip, Phan said.

The shortage is especially difficult now that business is finally picking up again as lockdowns end across the country, Phan said. The high volume of customers is another strain on the store on top of the low supply of boba.

Cas Hernandez, a Sac State biochemistry major, expressed concern for how the shops can handle this situation as he’s seen customers begin to dwindle.

“I usually don’t get boba in my drinks, but I know it’s the most common topping, so I hope that shops are able to survive the shortage with potentially fewer customers than usual,” Hernandez said. “I’ve seen a few people walk out when a shop said they were out of boba.”

Less than a mile away, Katie Wong, a co-owner of the T4, Tea for Me off Howe Avenue, said she and her business partners got involved in boba because they loved the product.

Wong said her store, which opened in October 2019, has benefited from the corporate nature of T4. She said T4’s headquarters is stocked with boba for the next three months.

“The trickle will eventually come down to us, but not at this point,” Wong said. “Not yet.”

However, Wong did say that the shortage has thrown a wrench in the logistics of the company and that each store could only expect to receive maybe half of the stock they ordered due to the shipping slowdown abroad.

Wong said that T4 locations have been sharing their supplies to ensure they are all stocked up properly. Sacramento County has eight T4 locations, according to Google Maps data.

With regards to the pandemic, she said her location was hit hard by the initial lockdown in spring 2020 but has seen recovery in recent weeks.

“We saw sales plummet 90% the first three months, with COVID coming in,” Wong said.  “Things are slowly picking up now with the restrictions being lifted and everything being a bit more eased.”

Andy Leung, manager of T4 on 16th street, said he called headquarters after hearing about the shortage to see if it was true and how T4 would respond. He said he was told that the alternate plan is to use jelly as a replacement if the boba shortage gets worse.

While boba is the most common topping, most shops offer other options.

“I know a lot of boba shops, for us at least, offer things like strawberry jelly, which is made out of coconut,” said Allen Lieu, an employee at Lazi Cow on Howe Avenue. “There’s also egg pudding and grass jelly, but those are pretty much the other toppings that we have that are the same concept as boba but not exactly like the actual boba.”

Other shops offer different types of drinks that they hope can supplement the absence of boba. Happy Lemon off of Crocker Drive, for example, serves a variety of citrus flavored drinks alongside their boba tea selection.

Sandy Vue, an assistant manager and supervisor at Happy Lemon, said the summertime heat drove many customers to seek out the other options as the neighborhood developed.

“At the start of the pandemic we actually got really busy,” Vue said.

Vue also pointed out that the supply of tapioca starch was not the only thing causing issues for local stores.

Phan said she regrets that they are unable to provide a supply during the demand.

“I feel bad because it’s not their fault we can’t give the customers what they want,” Phan said.