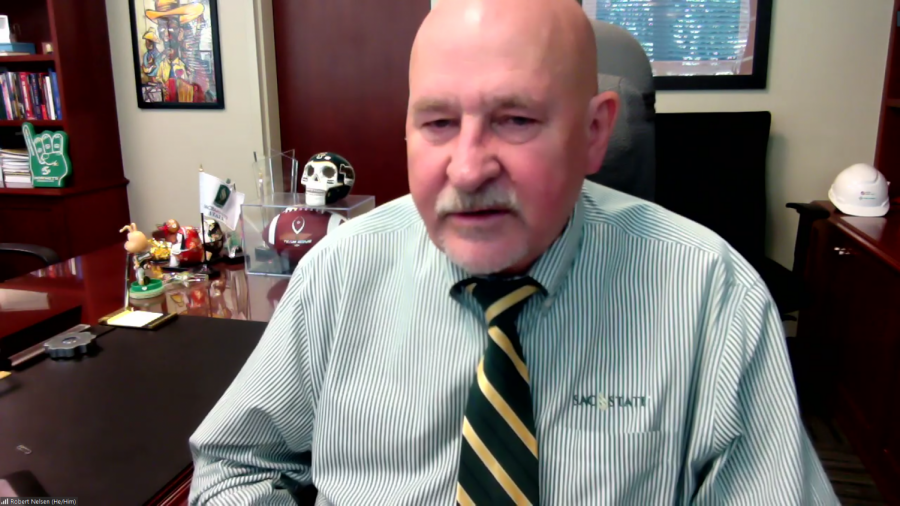 Sacramento State President Robert Nelsen announced stimulus funds will be distributed to students in the fall during an Associated Students, Inc. working board meeting Wednesday, May 5, 2021. Nelsen said $50 million in federal funds has been allocated in total to help students with their basic needs. Screenshot taken via Zoom.

Sacramento State President Robert Nelsen announced the school’s plans to spend approximately $50 million in incoming federal stimulus funds, including another round of direct payments to students in fall 2021, during an Associated Students, Inc. working board meeting Wednesday.

An estimated $20 million will be allocated for another Higher Education Emergency Relief Fund (HEERF) payment for students. According to the U.S. Congress, HEERF is authorized by the American Rescue Plan Act of 2021 and helps provide financial relief during the COVID-19 pandemic to higher education institutions.

Nelsen said students will receive between $650 and $850. The amount a student receives will depend on their financial aid and Pell grant status and how many units they are enrolled in, according to Nelsen, similar to the criteria from the last HEERF grant distribution.

Nelsen did not specify what date these grants would be distributed but said the plan is to distribute them in the fall.

“These funds will come in the fall,” Nelsen said. “They might get here in the summer where we might be able to disburse some of the money to students that registered then, but don’t know exactly when.”

Nelsen said Sac State hopes to expand the eligibility for the HEERF grants for students. Previously, the university was not able to give the HEERF grants to undocumented or international students since the money came from the federal government, so instead the administration set aside funds from other university sources so that these students would still receive the same amounts as students who are U.S. citizens.

“I think this time we will finally be able to use it for our undocumented and international students,” Nelsen said.

As for the rest of the money, approximately $10 million will be used to help address food needs on campus, including the Food Pantry, Pop-Up Pantry and food venues, according to Nelsen.

“I’m really relieved to hear that this is being put in place because I know that I have utilized the Food Pantry and Pop-Up Pantry a lot, and I know a lot of students are on the same boat,” ASI Director of Undeclared Students Sadia Ashraf said.

Another $10 million to $12 million is planned to be allocated for food insecure students that live outside of campus, Nelsen said.

Nelsen said another $10 million to $12 million is slated to go to the bookstore to help provide students with books, computers and other important school supplies.

“The price of books is so expensive right now,” Nelsen said. “A lot of people have been able to upgrade their iPads or computers, but some haven’t. It would allow us a way to be able to make certain that the students are getting prepared for classes.”

Funds that are leftover from the stimulus will be going to an emergency fund, which helps students with medical, financial or other emergency situations.

According to Nelsen, the emergency fund has historically maintained a budget of approximately $3 million.