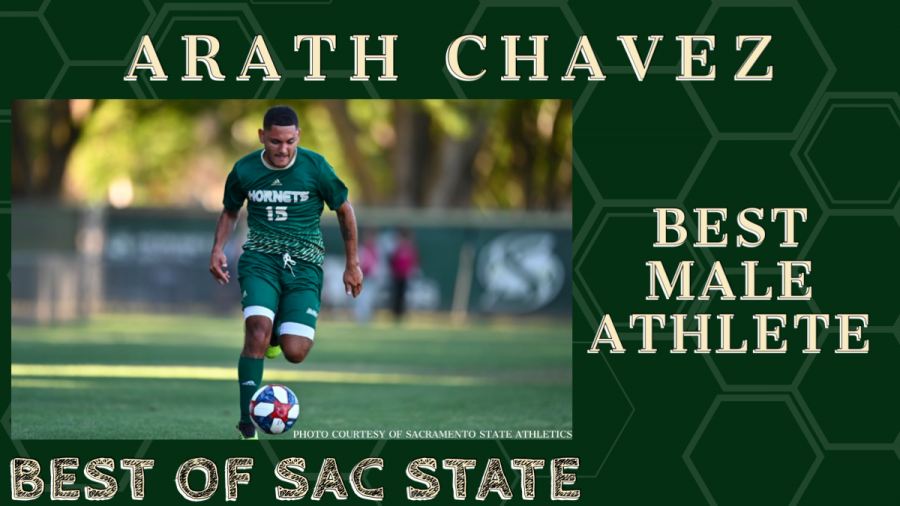 Sacramento State soccer player Arath Chavez’s impact continues to be felt in the Sac State community after friends and family lost a man whose talent and hard work spoke volumes on the field, but also whose kindness, joy and personality spoke loudly off the field.

“He always wanted to make sure that people had a smile,” said Daniel Chavez, Arath’s older brother. “He was kind of loud, but that good loud that brought you joy, you know?”

Arath died in a motorcycle accident in January at the age of 20 and was voted as the Best Male Athlete by State Hornet readers in May.

Born in Mexico, Arath and his brothers moved to the United States when he was around 7 years old after living with their grandmother for a few years as their mother got established in Los Angeles, Daniel said. The boys were put into a dual-language program and worked hard to pick up English quickly, switching to speaking only English in the home to learn it faster, Daniel said.

As a little kid, Daniel said Arath was full of joy and energy, always wanting to do everything his older brother did and his mom made sure the two were always together.

“I always had to bring him along with me because my mom said, ‘You got to take him or you’re not going,’” Daniel said. “He just, he loved being out with me. It was always nice having him around. All my friends were pretty much his friends.”

After a trip to Galt, California to visit a family member when Arath and Daniel were about 12 and 13 years old, their mother decided to stay there with her boys and not return to L.A.

“My mom just instantly loved it,” Daniel said. “She ended up from a trip just coming to visit, we ended up just staying.”

Arath became involved in the FFA raising pigs for show, which Daniel said Arath was very proud of. The community of Galt was integral in their childhood and has been integral in helping the family mourn Arath’s death, according to Daniel.

“The people of Galt have been very helpful,” Daniel said through tears as he spoke. “It’s like a family here, you know? It’s been very great. The community is amazing. Everyone helped out with everything and definitely relieved some of the weight on my mom’s shoulders for sure.”

Arath had another family at Sac State, where he was coming into his own as a player on the team after being one of the top reserves in 2019. Teammates and coaches said his death was devastating for everyone, but they supported each other and grew closer together as they mourned.

“You hear the guys cheer ‘Family!’ [after a match] because we are one tight family and Arath is still a part of our family,” said assistant coach Mike McDougall.

McDougall said Arath will also be honored at a game in the fall and they are planning a way that he will be forever seen and honored in their team room.

The Sac State men’s soccer team had its season canceled in the fall and moved to the spring until the Western Athletic Conference decided to cancel the spring season also. The team finally got to get back on the field for some exhibition games starting in April.

Sophomore Axel Ramirez said it was incredibly hard for the team, but his death helps them not take anything for granted and to work hard in practice everyday. Junior goalkeeper Ryan Curtis said Arath is on their minds when they play.

“We took it to heart and we play for him,” said junior goalkeeper Ryan Curtis. “So I think we kind of played with a little bit of a chip on our shoulder and I think he’s watching every single game and rooting us on from above.”

Arath was a star at Galt High School, making the varsity soccer team as a freshman which allowed him to play two years with his older brother Daniel.

“One of my favorite memories is every time he scored, he’d come straight to me and give me a hug,” Daniel said.

Daniel said he has “millions of memories” but that moments spent sharing the field with his brother were his favorites.

White said Arath was a spectacular leader who had a magnetic personality that people gravitated towards.

“He had that kind of magic ‘X factor’ that drew people to him,” White said. “He was just unfailingly kind and I know that when someone dies, we want to kind of throw all this hyperbole about them. But with him it’s true, you know?  He really never said a bad thing about anyone.”

Beyond just soccer and raising animals, Daniel said Arath loved cars and was always working on them with their cousins. He never had the chance to own his own car, but Daniel said he was always bugging him to drive his BMW 328i.

“He probably used it more than me,” Daniel said with a laugh. “But he loved just asking ‘Can I borrow it for the day?’ And I was like ‘Yeah, why not?’”

Daniel said that Arath made his family and his mother extremely proud and that he will miss how his brother always put himself ahead of others. He said he hopes and knows that everyone will remember him the way he does.