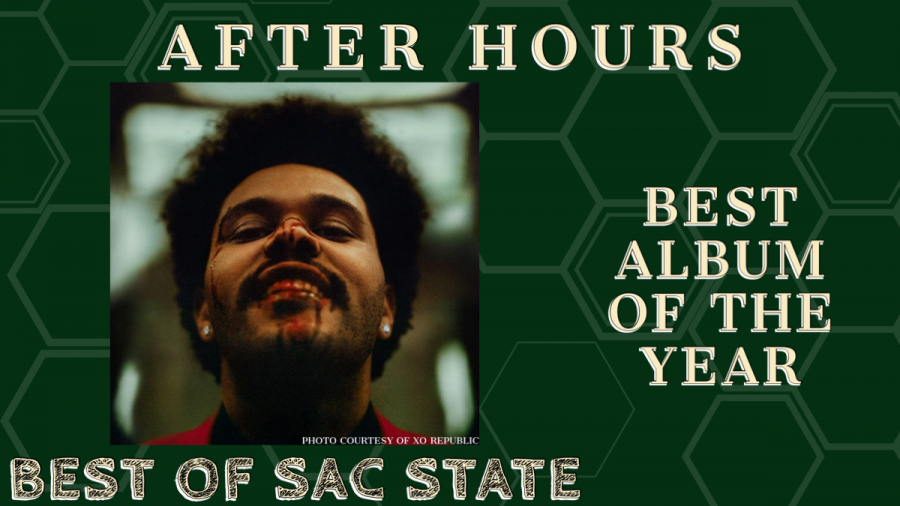 The Weeknd’s “After Hours” was voted as the best album of the past year by Sac State students. (Graphic made in Canva)

Sac State students voted for “After Hours” by The Weeknd as the best album of the past year in  The State Hornet’s annual Best of Sac State poll.

This choice should come as a shock to nobody as “After Hours” was one of the biggest and most well-received albums of 2020.

The album sold 444,000 album equivalent units in its first week, which is a personal best for the candadian pop sensation, topping the first week sales of his 2015 album “Beauty Behind the Madness.”

The album’s overall success vaulted The Weeknd into the elite club of Super Bowl performing musicians, as he headlined the halftime show for this year’s Super Bowl. While the halftime set included a few hits from his previous albums, one of the most memorable points of the show was the performance of the infectious “Blinding Lights,” the most popular song on “After Hours” and one of the most-listened-to songs in 2020.

“After Hours” has also spawned some of the most popular songs of 2019 and 2021. The remix of “Save Your Tears” with Ariana Grande recently made it to No. 1 on the Billboard Hot 100 chart, joining “Blinding Lights” and late 2019 hit “Heartless” and making The Weeknd just the second artist in history to have an album with Hot 100 No. 1 hits in three separate calendar years.

While it’s easy to be fooled by the commercial ascension that “After Hours” provided him, make no mistake — his fourth studio album as a whole is still very much on brand with the rest of his dark and sonically hypnotizing discography.

For every chart topper like “Blinding Lights” or “Save Your Tears,” there’s a deep cut like the chilling outro “Until I Bleed Out” or “Escape from LA,” a slow-burning cry for help that clocks in at nearly six minutes long.

“After Hours” plays out as if it were a movie with the deluxe version being over an hour long. Even though you can feel every minute of it, the time feels well spent once you get to the end of the project.

The Weeknd outdid himself with his latest body of work: he raised the bar for himself commercially, put out his most critically acclaimed album thus far and captured the listening ears of a significant number of Sacramento State students.

The only thing missing would probably be a Grammy Award, but “After Hours” not receiving a single nomination was considered the snub of all snubs by many; The Weeknd’s tweet calling out The Recording Academy for corruption received over 1 million likes.

The Grammys remain corrupt. You owe me, my fans and the industry transparency…

Who needs a Grammy when you have a Best of Sac State Award?