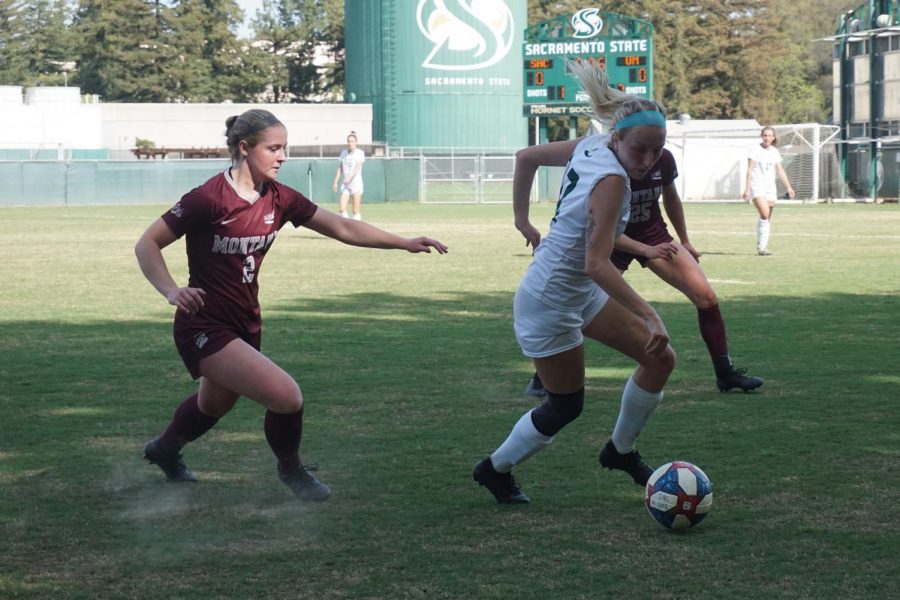 Senior midfielder Samantha Craig takes a swift turn toward the ball, with only six seconds left in the first half of the Hornet’s home game against Montana on Friday, April 2. Sac State lost the game in overtime with a final score of 1-0.

The Sacramento State women’s soccer team faced off against the undefeated University of Montana Grizzlies on Friday and Sunday, getting the honor of being the first team in over a year to play in front of home fans at Sac State. Unfortunately, the Hornets were unable to give them much to cheer about going scoreless in both matches.
Game 1 Hornets lose in OT
The Hornets faced off against the Grizzlies at Hornet Field on Friday and lost a close one, with Montana’s Alexa Coyle scoring the game winning and only goal for either team in the 95th minute during an overtime period, ending the game with a score of 1-0.

The Hornets only took three shots, two of them on goal, compared to Montana’s 16 shots, seven of which were on goal.

Senior Aubrey Goodwill, junior Christina Lazar and sophomore Jasymne Dunn were the only Sac State players to take a shot Friday, with Goodwill’s and Dunn’s shots being the ones on goal.

Sac State sophomore goalkeeper Katie Price had six saves during the game and one goal allowed.

Game 2 Hornets fall again 3-0
The Hornets lost to close out the two-game series against division-leading Montana 3-0 in its final regular season game at Hornet Field on Sunday.

For only the second time this year fans were allowed to attend and over 150 showed up.

The Hornets (1-4-4, 0-4-4 Big Sky) were unable to come up with a shot on goal the entire first period, giving up the first goal of the game at the 38th minute and another in the last minute of the half.

The Grizzlies (7-0, 6-0 Big Sky) had possession of the ball for a majority of the opening minutes of the match and the Hornets could hold them off for so long.

The Grizzlies’ three goals were more than enough as the Hornets were shut out for the fifth time this season.

Need to watch the whole thing to really appreciate the brilliance of the 3rd goal. 🤩🐻⚽️ pic.twitter.com/Tfh0INjAzk

Senior forward Julia Herrera was able to take two shots for the Hornets, one of which was on goal, in the loss to the Grizzlies.

Senior defender Aubrey Goodwill also got a shot on goal but also received a yellow card in the 25th minute.

The Grizzlies came out strong in the second half going up 3-0 with the final goal of the game coming in the 54th minute to put the match out of reach for the Hornets.

The Hornets will wrap up the regular season with a two-game series at Portland State on starting Friday, April 9 at 1 p.m.