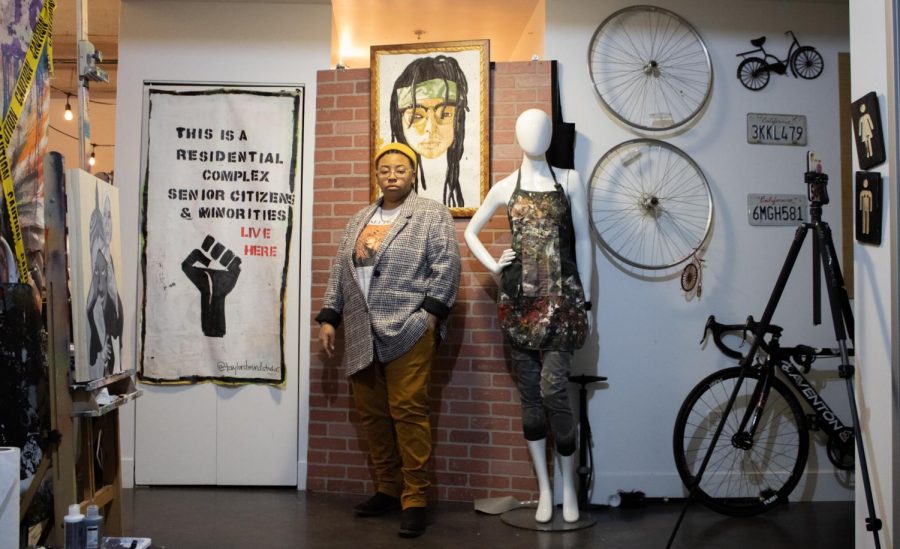 Artist Taylor Pannell stands next to a mannequin and in front of a self portrait inside her art studio Taylor’d Mind Studios in Sacramento on Feb. 3, 2021. The self-portrait is made from coffee watercolor and ink.

Sacramento artist Taylor Pannell grew up watching her family do whatever they could to extend themselves to those in need of help.

Pannell’s mother and grandmother would often take others into their home. Whether they were victims of abuse or could not afford to buy food, her family was there to provide for them, and this generosity left an imprint that has stuck with Pannell throughout her life.

Since she was 7 years old, Pannell dreamed of owning her own art studio where she could give back like her mother and grandmother, and in February 2020, those dreams were realized when she hosted friends, local artists and members of the community at the grand opening of Taylor’d Mind Studios at her J Street loft.

Pannell said that the grand opening was a success, gathering together over 80 people, but she wasn’t able to build off of this momentum for very long due to the COVID-19 pandemic hitting just a month later in March.

“Friday the 13th, I was supposed to have an event at the studio, but the world went on lockdown,” Pannell said, finding it ironic that this happened on a day associated with bad luck.

Pannell said that once the California shelter-in-place order was in full effect, she took a hiatus from hosting events for 2 1/2 months in order to work on herself, as well as plan and organize the future of Taylor’d Mind Studios.

Since returning from the hiatus, Taylor’d Mind Studios has held limited in-person open mic nights, art shows and virtual art classes for both adults and children.

“The pandemic actually worked in my favor,” Pannell said. “People need art and design and they are finally seeing the value of it.”

Whether it be self portraits of Pannell, customizations of retro sneakers or canvas paintings of projects in progress, anyone who walks into the studio would be challenged to make it through the door and not find a piece of art that catches their eye.

Doubling as both Pannell’s living space and art studio, Taylor’d Mind Studios is meant to be a hub for creatives to share their art, network and relieve stress.

“Before the pandemic people would come and do their homework, work on their music, work on their artwork — this was a space to be free,” Pannell said. “If they wanted to socialize with me then we’d socialize. Sometimes I’d feed them and we’d eat together.”

Pannell considers Taylor’d Mind Studios to be the “Home of Sacramento” and wants it to be a space that people of all backgrounds can take advantage of as a means to express themselves freely.

“I’ve seen the souls that needed help and I’ve heard a lot of their stories,” Pannell said. “If somebody, just one person, was in their corner, they probably wouldn’t be in the position they’re in. That’s what I want to provide, that place for people.”

Some who know Pannell personally admire the way she blends together her art, personality and values.

“There’s a lot of community reflected in her art,” said Didier Mponte, a friend of Pannell’s who has partnered with her on meditation workshops at the studio. “She celebrates diversity in her art. Offering other people a platform is an art in itself.”

Gabe The Fourth, a local artist who has performed at Taylor’d Mind Studios, said that his musical career has been positively impacted by Pannell and her studio.

“Before Taylor, I’d never performed outside of an open mic,” Gabe said. “She took a leap with me.”

Gabe said that since Taylor’d Mind Studios opened last February, he has performed at the studio at least three times as the headliner for an event, and that it’s always flattering for him to have Pannell introduce him on stage.

Gabe said that his favorite thing about Pannell is the way that she brings people together and that her studio accomplishes this by always providing a “positive and uplifting vibe.”

“It’s always so cool to be friends with someone you’re a fan of,” Gabe said.

Mponte said that he’s impressed with Pannell’s resilience since the start of the pandemic and how she’s managed to plan events to provide the community with an artful experience while also keeping safety in mind.

With safety restrictions still in effect, Pannell is trying to utilize social media as a way to give local artists a virtual platform.

Pannell said Sacramento needs Taylor’d Mind Studios and it upsets her when people say there is nothing to do in the city.

“I want to wake Sacramento up and provide things so people have something to do,” Pannell said. “Sacramento is a very artistic city, a very creative city, and people are just now starting to realize it — I just want to pull that out and provide that outlet.”

Pannell said she is happy with what she’s been able to do with Taylor’d Mind Studios, but still has goals to expand her reach to the community with what she calls a “Mega Museum.”

The museum would serve as a more artistically driven version of a community center, providing a place to work on art, record music and even exercise and play sports.

“I want to provide mental, physical and emotional health for people, along with creative health,” Pannell said. “I’ve always been community led. That’s my dream was helping people. I grew up with my family helping people and I wanted to help too.”