Team captains speak about return to the water after long hiatus 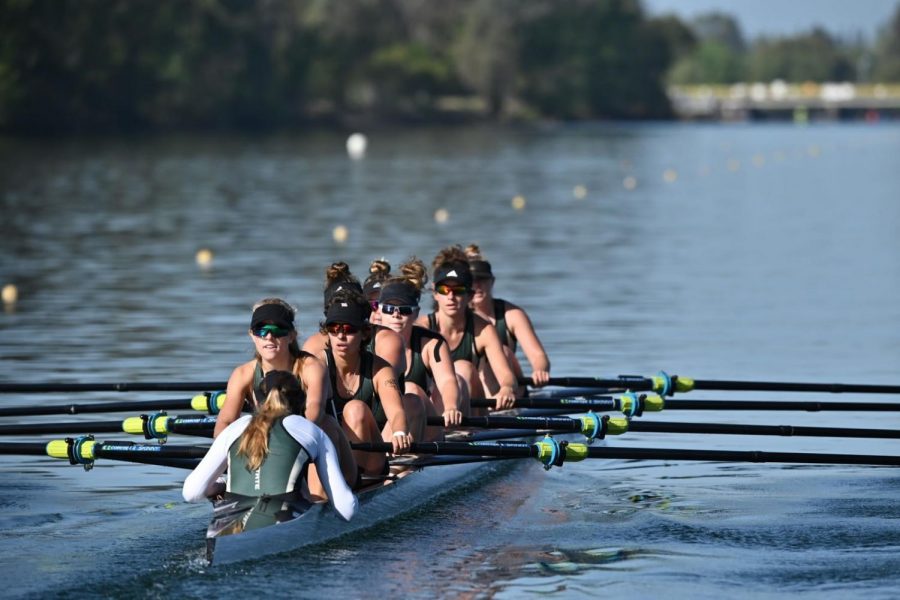 The Sac State women’s rowing team compete in a doubles race against Saint Mary’s College on April 10, 2021. That was the teams first competition in over a year due to the COVID-19 pandemic. Photo courtesy of Hornet Athletics/Photo by Bob Solorio

The Sac State women’s rowing team made a strong comeback after a year hiatus when the varsity eight team raced against Saint Mary’s College in Lake Natoma on April 10, winning by 20 seconds.

That performance earned Sac State’s varsity eight a Boat of the Week award from the American Athletic Conference.

This was the team’s first race since March 8, 2020. During fall 2020, the rowing team was limited in terms of training due to COVID-19 restrictions. The team had to conduct their meetings on Zoom and in order to train during the fall, they were split into groups of around 10 women who would always train together doing ergonomic work, circuit training, core work and cardio, said head coach Mike Connors.

The team was not allowed to be all together and train on the water until the spring semester started.

“Honestly, training in pods could have been very detrimental to this team and this kind of sport,” said senior co-captain Kelsey Rogers. “We weren’t able to get out on the water for the entirety of the fall and being on the water is crucial for us because it’s how we compete.”

Connors talked about how it has been staying connected to the team and keeping them engaged especially with their limited training time during fall 2020 and returning after the start of the spring 2021 semester.

“It’s been a challenge for everybody,” Connors said. “I think in this last spring we didn’t know what was going on, they finally cancelled the season, at that point the year was kind of over prematurely and in the summer they’re [the players] usually pretty much on their own.”

The team co-captain, senior Helena Young, reflected on the changes in their training and how they affected their team dynamic last season.

“Training in pods was very different from what we have done in the past,” Young said. “It was hard in the sense that we didn’t get to see all our teammates and made the process of getting to know the new people harder and longer.”

Young gave her opinion about how the changes such as training with ergometers off the water affected her performance and whether or not it encouraged her and her teammates to work harder.

“I think that it challenged the team in a good way,” she said. “I also think that it motivated us to work toward getting back on the water everyday.”

Sac State had a strong performance in their second tournament at the Dexter Lake Invitational Saturday in Eugene, Oregon. The varsity eight defeated Gonzaga for the first time since 2010 according to Hornet Athletics. The second varsity eight beat both Gonzaga and University of Southern California which was ranked #20 in the Collegiate Rowing Coaches Association poll.

Connors said he was pleased with the team’s start to the short season.

“I think we are making good progress,” Connors said. “Our eights have had good results so far and we think they can get faster given our late start to the season.”

The Hornets will compete in the Sacramento State Invitational at Lake Natoma on Saturday followed by the conference championship on May 16.