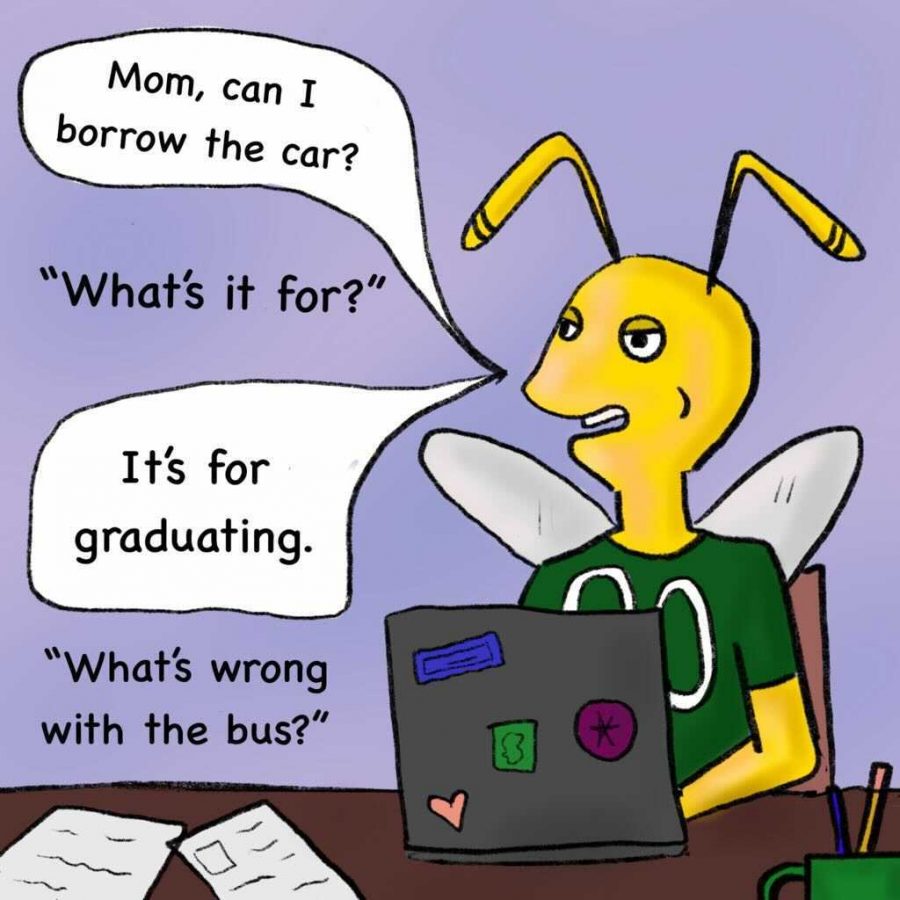 Sacramento State business finance major, Harkirat Singh, was not amused by the pun the university made in the name for the graduation ceremony for 2020 and 2021 graduates  — CARmencement.

“I thought it was like beating a dead horse, the fact that the name was CARmencement,” Singh said. “I didn’t feel like 100% effort was being put into the student’s graduation.”

Criticism regarding the CARmencement by several student graduates The State Hornet spoke to included a feeling of strangeness behind its announcement, the details of the event and even the name of the event itself.

“We all go through a long journey when we do this, but it just seemed like the solution that they picked was a little bit silly, a little bit patronizing, and it just wasn’t very inclusive for a good portion of the student body,” history major Carrie Sheahan said.

Child development major, Sophie Esquivel, created a petition that demanded the administration modify CARmencement to allow graduates to walk across a stage at the event rather than just drive-up to be awarded their diploma.

Esquivel created this petition because she felt graduates were not receiving the proper recognition and commencement they deserved from Sac State. At the time of this publication 883 people had signed the petition.

She said it is just really hard for her to understand that Sac State uses COVID-19 safety as an argument against a traditional commencement when there are so many inconsistencies with their rules on COVID-19 safety.

“…you [President Robert Nelsen and the administration] can’t argue it [COVID-19 safety to avoid deaths] when you’re allowing these athletes to be out, [an] outdoor gym, and in-person classes,” Esquivel said. “If President Nelsen and the administration cared that much about COVID, they wouldn’t be offering the gym to be outside and all the other things that I listed.”

Esquivel said she is not able to fit her family into one car, as CARmencement only allows one car per graduate.

“I have six siblings, and they all want to come, but I don’t have a big enough car for everyone and my parents are divorced,” Esquivel said. “You know, so that’s really difficult too. Who of my parents can come? Like my step parents, or just my parents?”

Graduate Jessica Guzman, B.A. in psychology, also questioned Sac State’s explanation of COVID-19 safety as to why CARmencement was the best alternative to an in-person commencement.

“I believe a couple months ago, in one of the rooms, they [Sac State] had, I think it was the Golden State killer?” Guzman said. “Like their arraignment was in one of the rooms in Sac State. I’m like, ‘What? Some killer can get their indictment at Sac State but I can’t walk?’”

During a CARmencement information session for students March 5, Cely Smart, chief of staff, for Sac State President Robert Nelsen, said she understood the plea by graduates that there be at least a stage for graduates to walk across at CARmencement, but unfortunately COVID-19 is still a major concern.

“If people are leaving their car, there is no such thing as no risk. People leaving the safety of their own vehicle, you’re around other people. It’s not that we don’t think students deserve to walk across the stage, we do, but we’re still in a pandemic,” Smart said.

President Robert Nelsen also responded to questions as to why COVID-19 safety is used as  a reason to hold a CARmencement rather than a commencement on March 5.

“Graduation is an incredibly important time,” Nelsen said. “A time that really matters, but so is all of life. To lose one student would be too much or to lose one parent in a car or in a stadium or any place, so we’re trying to make certain that we keep our students and their families safe.”

San Diego State University will host its 2021 in-person commencement at a local stadium, Petco Park, according to an update by the SDSU commencement committee on the university’s website on Thursday.

California State Universities in Fullerton and Long Beach will also be having in-person commencement ceremonies.

Smart said Sac State made the decision based on the guidance they had for Sacramento county and the current tier the county is in.

“Universities in other counties are operating under different sets of guidelines,” Smart said regarding the decision by other universities to hold in-person commencements. “Our decision to hold a drive-through ceremony was not based on logistics, but on our commitment to the health and safety of our campus community during the pandemic.”

Despite all the mixed reactions voiced by graduates, Abel Corona and Sheahan said they understand the pressure the administration may have faced while selecting what to do for their graduating students.

“I don’t want to wait,” Corona, a mechanical engineering major said. “Not all of us are gonna stay in the area, and who knows what things will be like a year from now? Are we still going to be dealing with COVID? Because it’s still up in the air, I’d rather just seize the moment and take this.”

Sheahan echoed Corona’s sentiment that the situation was not ideal and that CARmencement was not a great solution but at least a recognition.

“I do want to say that I appreciate that they were trying to come up with a solution,” Sheahan said. “It makes me feel like I’m appreciated and that they want to celebrate our achievements and I do like that. I just don’t think that the solution they picked was a good one.”

CARmencement will be taking place on May 21 and 22 with more days to be added as needed depending on the turnout for sign-up. Registration for CARmencement ended on April 1.

“For me personally, the hardest part is not being able to shake your hands and being able to be there with you together, but I know for you personally, it’s probably not being able to walk across the stage and see your name and everything else,” Nelsen said. “But you are encouraged to have your family in your cars with you being there next to you, celebrating with you, brothers and sisters, everyone that you could possibly get so that you can enjoy the day.”