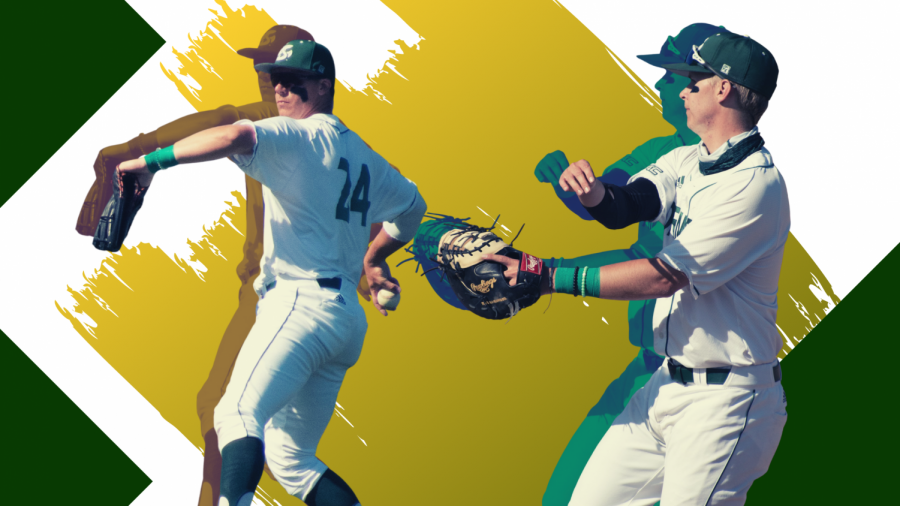 Matt Smith and Ryan Walstad fielding for the Hornets at John Smith Field. Smith and Walstad are first and second on the team in batting average. (Photos by Deanna Sanchez.)

After last season’s NCAA spring sports season was canceled, Sac State seniors Ryan Walstad and Matt Smith were left wondering what their future would look like. Walstad went to Wisconsin to play 40 games of summer ball while Smith stayed local, practicing in a Folsom facility.

According to Smith, the news first broke last year that the team would be taking a week off from the season due to COVID-19, and the team scheduled to play intersquad to stay in game-shape. As the team arrived at the scrimmage, the NCAA announced that they canceled spring championships, effectively ending their season.

“As we got to the field and suited up for practice, we saw on our phones on Twitter that the NCAA canceled spring championships,” Smith said. “Then [head coach Reggie Christiansen] got the call and just like that it was over.”

During the beginning stages of the pandemic, there was uncertainty on whether or not seniors such as Smith and Walstad would gain their year of eligibility back once restrictions were lifted.

“What’s next? Are we going to get a year back? Just a lot of unknown,” Walstad said.

The NCAA later extended eligibility for student-athletes, which allowed Smith and Walstad to return and conclude their college careers. Both Smith and Walstad returned to Sac State for their second rendition of their senior year.

“It was pretty crazy how it happened,” Smith said. “Obviously there’s more to life than just baseball but at that point as a senior, there was my college career, over, like that fast.”

For Smith, the 2021 season marks his sixth at Sac State. Smith, an outfielder and designated hitter currently tied for the Sac State all-time record in triples, signed with Sac State out of high school after growing up in Placerville.

“Seniors all around the world, not just the baseball world, but other sports, are entirely grateful that they gave us that year to finish our careers the right way,” Smith said.

Walstad grew up in West Sacramento, familiar with the Sac State program, and after high school played at a junior college in the Bay Area before returning to Sacramento to play first and second base for the Hornets.

“I always wanted to play at Sac State,” Walstad said. “Wasn’t quite good enough out of high school yet… developed in junior college and Reggie gave me an opportunity.”

The 2021 season has been good for both Smith and Walstad, who batted third at .433 and fourth at .350 for the Hornets respectively during the season the Hornets achieved their first top 25 ranking in school history.

“Anytime you can have an older presence… Matt’s a sixth-year guy, Ryan’s a fifth-year guy, they just have so much experience,” Christian said. “Experience is such a big deal in college baseball. Both those guys are extremely mature in their work, it’s been great to see those guys.”

Their success this season is a result of the work put in over the past twelve months by staying ready, with Walstad getting summer ball in while Smith used baseball practice as a mental escape while also putting in work.

“It was kind of a stress reliever for me, everyday I’d go lift and hit and be away from the quarantine aspect,” said Smith.

Both Smith and Walstad give Christiansen and the coaching staff a lot of credit for the team’s success.

“I’ve always been grateful for Reggie,” Walstad said. “[I’ve looked] up to him since high school, he’s made a huge impact on my career. Wouldn’t change it for the world to get to play at Sac State.”

Christiansen in his 11th year as the head coach has led the Hornets to three WAC championships.

“He truly, genuinely cares about us as individuals, not just as baseball players,” Smith said of his head coach. “He wants us to grow as both baseball players and as members of society.”

Both Walstad and Smith homered last weekend versus New Mexico State, and they continue to be a presence in the middle of the Hornet lineup.

“They’re a huge part of our offense, they always have been,” said Hornets reliever Brady Rodriguez. “They made some strides and we’re seeing the results this year.”

Smith has been in the program since 2015 with Walstad joining Sac State in 2018.

“Matt Smith is an older leader on the team, veteran guy,” Rodriguez said. “He’s always doing the right thing. People are able to follow him. He’s fun to watch in the box, the dugout gets excited for the chance of the longball with Matt.”

Walstad, who has appeared in all but two ball games thus far on the season, is second on the club in slugging percentage behind only Smith for the Hornets.

“Walstad is a big glue guy on the team, everybody loves the guy,” Rodriguez said. “And when he succeeds everybody is able to get behind him and feed off of him.”

When asked about their goals for this season, Walstad, Smith and Christiansen all had the same answer.

Super Regionals is the equivalent of the “sweet 16” in the NCAA Division I baseball tournament, where each team is tasked with a best-of-three series with the winner advancing to the College Baseball World Series, hosted in Omaha, Nebraska.

As both players head down the final stretch of their college careers, Smith said they look to pass on the culture of Sac State baseball and act as leaders to younger teammates.

“It’s our job as the older players to show them the ropes,” said Smith. “Making sure they get their schoolwork done so they’re eligible to play, so when they’re in our shoes they can do that for their younger players.”

This year the Hornets experienced first hand how easily the season can be stopped, just as they did last season, as their series versus Creighton earlier this month was canceled due to a positive COVID test. Despite the canceled series, the Hornets are determined to complete the year.

“That year was taken from us so fast that we’re willing to do whatever it takes,” Smith said. “Wearing a mask isn’t that hard.”

The Hornets are currently third in the Western Athletic Conference as they get set to play Northern Colorado State University this weekend for a four game series starting Friday.