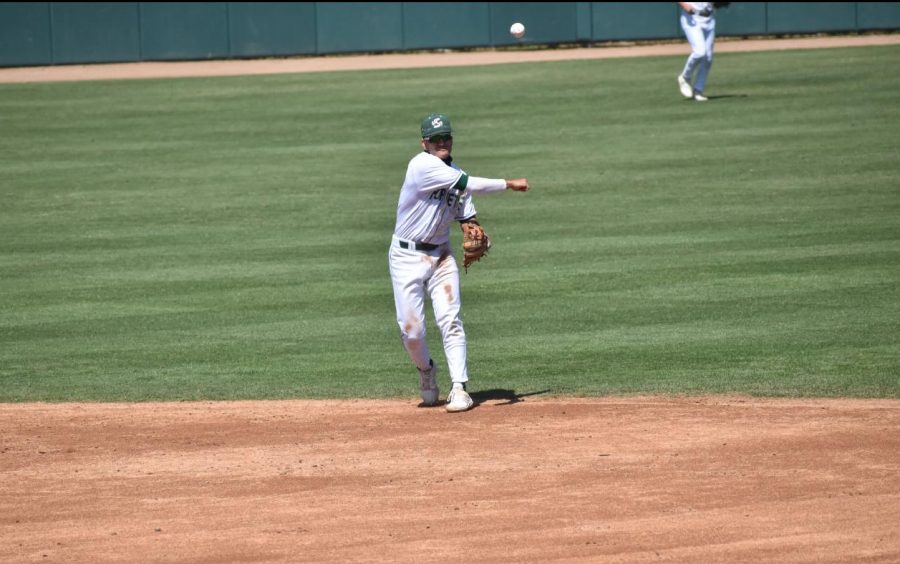 Sacramento State second baseman Jorge Bojorquez fields a roundball and throws to first in game one of Friday's action. The Hornets held on to win 10-5 at John Smith Field.

It had been ten days since Sac State baseball last took the field, after beating Stanford and later being ranked in the top-25 for the first time in school history.

The Hornets looked to extend the momentum over an Easter weekend series on the road versus Creighton University.

That series was canceled due to a positive COVID-19 test, and the Hornets stayed home as they prepared for New Mexico State, a Western Athletic Conference foe. The Aggies were 8-5 in WAC play heading into the series and were three games behind Sac State, who own an 11-2 start in conference play.

Game One: Randall, Hornets overcome slow start, beat Aggies 10-5
The Hornets and Aggies started their four game series with a seven inning showdown Friday afternoon, and head coach Reggie Christiansen turned to his ace, Scott Randall. Randall leads the conference in strikeouts and is tied for the conference lead in wins but he started off on the wrong foot on Friday

Randall gave up two runs in both the first and third inning, including a two-run homer by the Aggies’ Ethan Mann making the score 4-0.

However, the Hornets had no interest in giving into the Aggies as first baseman Ryan Walstad hit a solo home run. Later in the inning, shortstop Keith Torres hit a three-run homer to knot the game at 4-4.

And this game is tied! Keith Torres with the big fly, a three-run shot to tie the game at four. #StingersUp #WACbsb

In the fifth, the Hornets added three more, including two coming in on an Aaron Zeidman base knock.

The Hornets’ scoring continued in the sixth inning as Dawsen Bacho doubled in two runs and then later scored himself on a Dylan McPhillips single.

As the game went on and the Hornets gave Randall a lead, he settled into his dominant self. He struck out 11 Aggies and walked just one over six innings of work, improving his record to 5-0 on the season.

Randall said he used his frustration to elevate his game.

“I got really mad after the first inning between the umpires not giving me some calls and just me missing spots and allowing them to get hits and scoring,” he said. “Doing that, I just sort of got mad and rolled with that the rest of the game.”
Game Two: Hornets come out flat, fall to Aggies 10-2

After the come-from-behind victory to start off the doubleheader, the Hornets succumbed to a rather disappointing loss Friday night to the Aggies 10-2.

Just like in game one, the Aggies scored two in the top of the first, however, that’s about where the comparisons stop. The Hornets allowed three more runs in the second inning, en route to allowing runs for the Aggies in each of the first six innings of the ballgame.

Freshman Eli Saul was the starting pitcher for the Hornets and was roughed up, going just 2 innings and giving up six earned runs while allowing 7 hits and walking 6 more before getting pulled.

The Hornets offense wasn’t in sync as it was in the first game, not even getting a hit until Ryan Walstad’s single in the fourth. They wouldn’t score until an inning later when Steven Moretto hit a solo shot to give the Hornets a run.

Steven Moretto, tell it goodbye! Mo puts the Hornets on the board, but Sacramento State still with a lot of work to do, down 9-1 in the fifth. #StingersUp #WACbsb

The latter innings were more of a formality than a contest as the game was no longer in doubt. Perhaps the biggest uncertainty was whether or not the Hornets were going to get mercy ruled, but they kept it close enough to play nine.