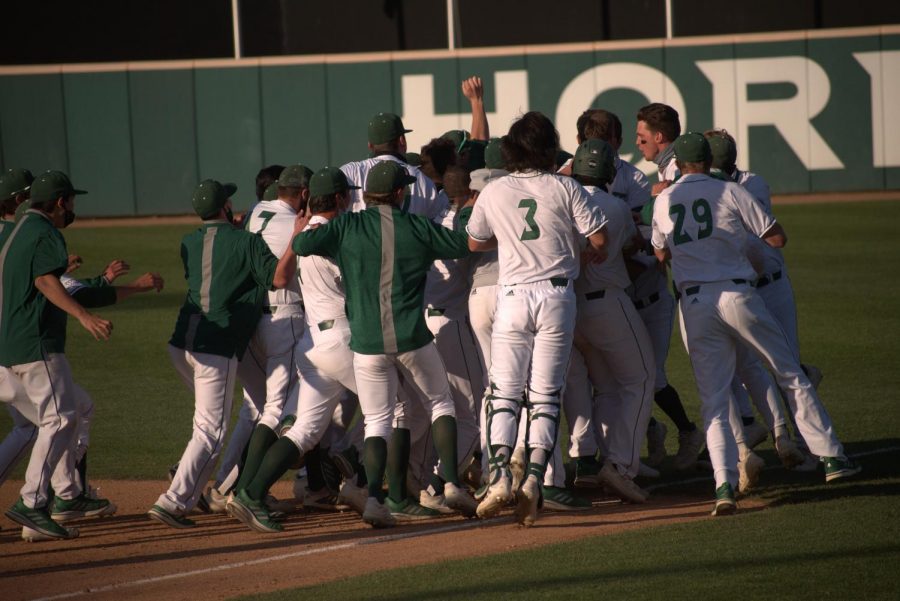 The Sacramento State baseball team rushes the field after Matt Smith’s walk-off hit during the ninth inning of the home game against Stanford University at John Smith Field on Monday, March 29, 2020. The Hornets were named the 24th ranked team on Collegiate Baseball’s top-25 poll on Monday, marking the first top-25 ranking in Sac State history.

For the first time since Collegiate Baseball started publishing Division I rankings in 1959, the rankings will feature the Sacramento State baseball team, according to Sac State Athletics.

The Hornets are ranked 24th among college teams after beating then-24th ranked Stanford last Monday, leapfrogging them in the poll as the Cardinal dropped to 25th.

Despite being in second place in the WAC standings, the Hornets are the only team representing the Western Athletic Conference in Collegiate Baseball’s poll.

“It’s something we’ve all been working towards,” said junior pitcher Brady Rodriguez. “It’s something that our team believes we are worthy of. Right now we’re playing good baseball and people are starting to recognize Sac State as a baseball program.”

Collegiate Baseball is one of five polls published on the NCAA website, marking a historic start to the Hornets season.

“One of the dreams, goals and visions of this program is to be a top-25 type of a program, it’s something that certainly takes time to build,” Christiansen said.

The Hornets are set to take on New Mexico State this weekend at John Smith Field, starting with a doubleheader Friday as the Hornets return to action following last weekend’s canceled series against Creighton due to a positive COVID-19 test within Sac State’s baseball program.