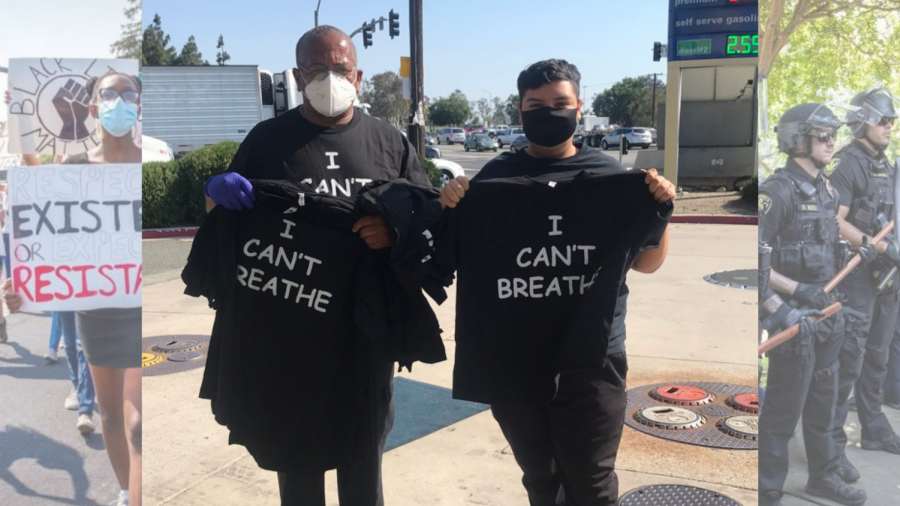 Robert Gonzalez stands next to a t-shirt seller at a gas station during a George Floyd Protest in Fontana, California on Wednesday, May 27, 2020. Gonzalez said he was shocked by the results of the Derek Chauvin trial. Background photos taken by Ian Ratliff (left) and Sara Nevis (right).

Floyd died on May 25, 2020, after Chauvin pressed his knee on Floyd’s neck for 9 minutes and 29 seconds. Floyd’s last recorded words were “I can’t breathe,” in a video taken by then 17-year-old Darnella Frazier who witnessed Floyd’s death. Chauvin and other Minneapolis police officers were called by a store clerk because he suspected Floyd paid with a counterfeit $20 bill, according to the Los Angeles Times. Floyd’s death sparked protests all over the country and world.

The State Hornet spoke with students to get their reactions and thoughts about Chauvin’s trial results.

“I was relieved, justice needs to be served no matter what color but to see that another man didn’t get off killing a Black man relieves me,” Butler said.

Butler said this verdict does not set any precedent because another Black child, Ma’Khia Bryant, was killed.

A Columbus Ohio police officer, Nicholas Reardon, shot and killed 16-year-old Ma’Khia Bryant after responding to a 911 call that people were trying to fight and stab her on Tuesday. Bryant was shot 20 minutes before Chauvin’s verdict was announced. Bryant was the one who made the call for help and protection.

“The justice system needs to be consistent with these types of verdicts to ultimately stop the unarmed killings of innocent civilians everywhere,” Butler said. “There is still much work to be done.”

Francisco Tarin, 21, said he is happy with Chauvin’s verdict because other Black victims in the past, such as Trayvon Martin, have not received the justice they deserve.

“I was afraid it’d be a repeat in history had Chauvin been acquitted,” Tarin said. “I am grateful for how the jury ruled in this case and am happy that goodness prevailed.”

Tarin said he felt that the verdict was too good to be true.

“While it still saddens me what happened to George Floyd, at the very least things took a turn for the better today and justice is being served,” Tarin, a political science major and economics minor, said in an Instagram direct message.

Tarin said he is hopeful that Tuesday’s verdict will set an example for members of law enforcement and will deter other members from using excessive force.

“Today is monumental in the fight for racial equality, fairness in our criminal justice system, and ensuring nobody is above the law,” he said, adding that there are still more issues to tackle before the system is fully reformed.

Tarin said he is hopeful and optimistic that this verdict will be the first of many steps in the right direction.

Robert Gonzalez, an 18-year-old international relations major, said he was shocked by the results.

“It is extremely rare that an officer is found guilty of murder in these types of cases,” Gonzalez said in a Twitter DM.

RELATED: Sac State students discuss the impact of police brutality on their communities

Although Gonzalez said justice was served Tuesday, he said there are more families who have been impacted by police brutality that need the same justice, such as the families of Ahmaud Arbery, Breonna Taylor, Adam Toledo and Daunte Wright.

“No one is above the law and that cops who abuse their power will be charged for utilizing force,” Gonzalez said.

Allie Santiago, a 21-year-old psychology major, was not aware of the trial happening because she has not spent time focusing on the news.

“I saw the results from friends on social media,” Santiago said in an Instagram DM.

Santiago said she believes the verdict was the right move to make because of the display of improper actions by Chauvin.

“There were many other ways he could have deescalated the situation,” Santiago said, adding that Chauvin abused his power as a policeman.

According to Santiago, civilians and officers need to explain what they are doing so there is no miscommunication on either side.

Felicitas Morales, a 20-year-old communication sciences and disorders major, said she was initially surprised when she heard the verdict and then felt relief and hope.

“I feel that the trial gave power to the experiences many Black people face and showed a glimmer of what hope may look like,” Morales said in an Instagram DM.

“I hope the trial shows that police can be held accountable,” Morales said.

“Without the video, there may have never been a court trial and conviction,” she said, adding that the marches across the nation have shined a light on the case.

Third year criminal justice major, Marissa Marin, said she believes that this verdict had an impact on the justice system and will help with the prevention of and enforcement towards police brutality.

“Officers from this point on should expect to be held accountable for any cruel or unnecessary actions they take out on the people they are supposed to protect,” Marin said.