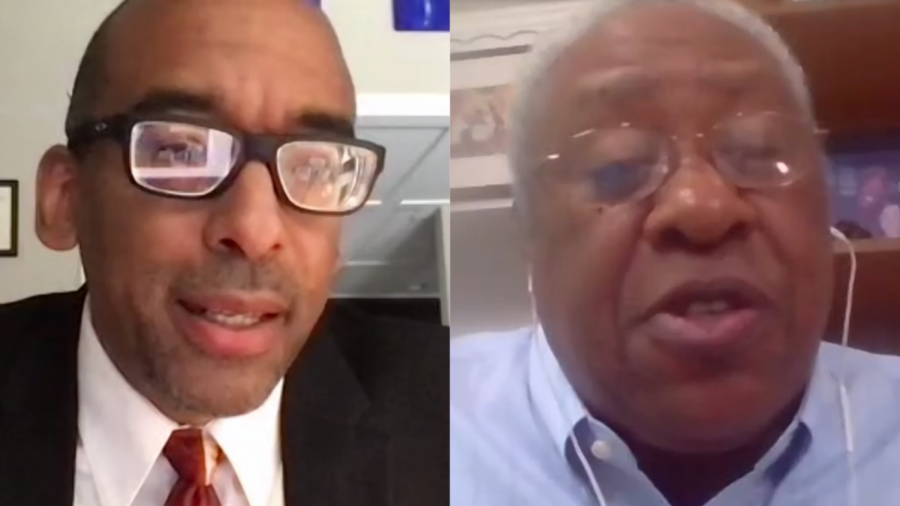 Sacramento State's only Black professor in the college of business administration, David Moore (left), and political science professor Robert Oden (right) speak at a teach-in on systemic racism in higher education for the California Faculty Association on Tuesday, April 27, 2021. At the virtual event, Oden said President Robert Nelsen was negligent in not sanctioning the professor, Sanjay Varshney, for what he did to David Moore. Screenshot taken via Zoom.

A previous version of this article failed to acknowledge that the “Teach-in: Systemic racism at Sac State & Higher Education” on April 27, 2021 was co-sponsored by Sacramento State’s Center on Race, Immigration and Social Justice.

On Sept. 10, 2018, Sacramento State finance professor Sanjay Varshney called Sac State’s police department on the only Black professor in the college of business administration, David Moore, for refusing to leave during a Student Investment Fund club meeting when Varshney demanded he leave.

Moore had developed the fund’s trading strategy for the club and was one of its faculty mentors, according to a Mother Jones article on the professor published in Dec. 17, 2020.

After Varshney called the police on Moore, the professors spoke with the officers and agreed to settle the dispute with the dean at a later time.

Moore said he immediately sent an email to Sac State President Robert Nelsen after the incident with Varshney.

“President Nelsen should resign as president of CSU Sacramento. He has failed as a leader,” Oden said, adding Nelsen was negligent in not sanctioning the professor, Sanjay Varshney, for what he did to David Moore.

According to Moore, after he informed Nelsen about the incident, Nelsen recommended he follow the process for reporting incidents like these and follow the chain of command.

Oden also called for students, faculty and community members to put pressure on the chancellor and the board of trustees to have Nelsen resign.

Oden said the California State University Board of Trustees and Chancellor Joseph Castro never responded to a letter sent to them calling for an investigation into what occurred with Moore.

“They totally ignored it because this is happening in all the other campuses as well,” Oden said.

Oden said no one, especially a professor on campus should be taken out of a classroom by an armed policeman. He added there is no reason, but a political reason, by the head by the former dean of the business school.

“I think President Nelsen didn’t do anything about this, because he didn’t want to expose this former dean, who was a big fundraiser for this university and the school [college] of business,” Oden said.

According to Oden, Nelsen was negligent in not letting the campus know the situation immediately, not two years later when Mother Jones produced an article of the incident.

In a SacSend email sent to students Dec. 21, 2020 addressing the article, Nelsen said the incident has been subject to “several grievance proceedings and is still pending arbitration.” Nelsen added the university remains unable to provide additional details of the case.

“Our previous statement remains in effect, with no additions,” said Brian Blomster, director of news and communications at Sac State.

Nelsen does not wish to comment on the matter of the call for his resignation, said his Chief of Staff, Cely Smart.

Moore added if he had to do it over again, he would get an attorney early after the incident and get guidance from the attorney on the best way to proceed.

Moore said an attorney can help employees with legal matters like whether they would like to file a grievance or sue people personally. He did not choose to sue Varshney as to not “lawyer up.”

“CSU will pull out all the stops to protect itself and the damage,” Moore said, referring to the California State University system. “I’ve heard some tall tales about how violent and aggressive I am with no police record whatsoever, not even a speeding ticket.”

Moore said he is sure he is “blacklisted” just for criticizing the CSU, calling it a shame.

“They don’t care about you,” Moore said. “They care about their image.”

Moore said he was upset after the incident happened and did not bother filling out the campus climate surveys administered in 2018 to students, faculty, staff and administrators. The survey asked about employees’ experiences while working at Sac State and their opinions about the institution, as well as demographic questions, according to posted survey results.

“Much like when the car dealer calls you after getting service and asks you to give them all five, I’m saying give them all zeros,” Moore said. “Fill it [the survey] out anyways, even though it’s biased. Maybe they’ll throw it out. I don’t know. But I think ignoring these campus surveys may not be the best path.”

“CSU has all sorts of diversity inclusion officers, training, so their public image is they identify with caring about diversity and inclusion,” Moore said. “But when you hear stories like mine, when those misdeeds come to light, you begin to wonder.”

Moore also recounted an instance with a dean regarding race.

“I had another former dean – we have a lot of deans in the college of business – he said he didn’t like it when ‘people played the race card,’” Moore said. “Well, how dare I ask, ‘Why am I the only Black professor tenured?’”

Oden said he took his department to task by participating in a forum called ‘Engaging Racism’ to express what happened in the hiring process at Sac State. At the forum, Oden spoke on his experience at a hiring committee where a Latinx professor was not hired and a white professor with the same skillset was hired instead.

He added if Sac State wants diversity on campus and in the college of social sciences and interdisciplinary studies, the university needs to do something concrete.

“I got castigated by folks in the department,” Oden said.

He said what was going on in his department with a dean, sitting in the front row and left.

“They didn’t like that, ‘oh, we want to keep this stuff quiet. We don’t want nobody to know this is personnel decisions.’ So they hide behind those kinds of things.”

He said that became another controversy, so the panel met with President Nelsen about the issue. “And he was basically non committal about it,” Oden said.

The President’s office sent a  disclaimer via email with the video, according to Oden, due to what he said about not hiring faculty of color. The disclaimer states that “Statements made during a discussion are not be considered an expression of the views and opinions of the Board of Trustees of the California State University and/or Sacramento State or any individuals other than the panelists and moderators themselves,” according to a copy of the disclaimer The State Hornet received from the department of ethnic studies.

The full video of the forum is currently available on YouTube.

Blomster said the department of ethnic studies originally released and posted the “Engaging Racism” video on its website following the 2015 event, however the webpage where the video resided was removed during the University’s website redesign in summer of 2019.

Moore also pointed out the murals from the Cesar Chavez Student Center and Malcolm X Plaza at CSU San Francisco that the CFA’s event flyer featured, criticizing the usage of civil rights icons by an institution that still has systemic racism to dismantle.

“How do you think Malcolm X and Cesar Chavez would feel about the CSU’s race relations and the use of their name and likeness?” Moore asked. “We’ve got an entire building, an entire plaza, but incidents like mine and others’ are allowed to happen.”

Moore said for the CSU to have these murals plastered on buildings and have an entire plaza named after Malcolm X, but not support equality and justice and freedom for all, is “false advertising.”