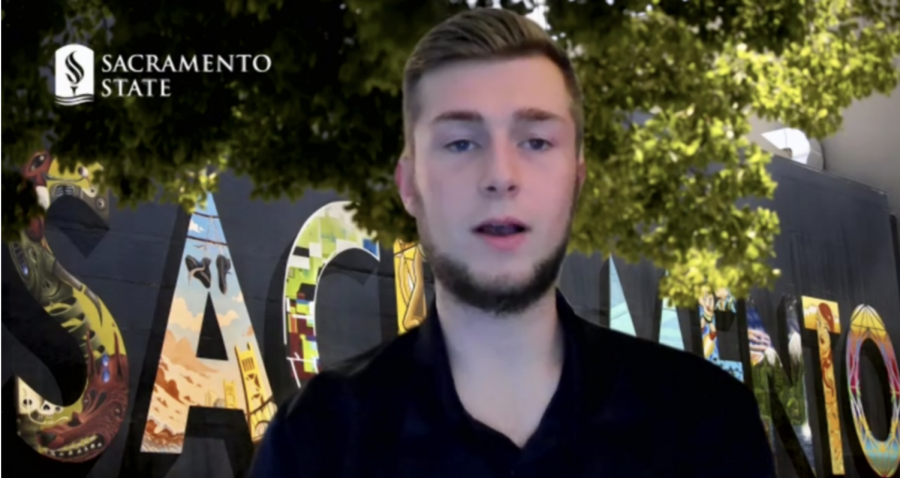 (File photo) ASI President Noah Marty discusses the merits of supporting undocumented students for being eligible for federal aid during its Zoom meeting Wednesday, March 17, 2021. ASI passed a resolution in support of a medical amnesty policy towards students who are affected by substance abuse during its board meeting on Wednesday, April 28, 2021.

Sacramento State’s Associated Students, Inc. unanimously passed a resolution in support of a medical amnesty policy towards students who are affected by substance abuse during its board meeting on Wednesday.

Currently, if a student is illegally in possession of alcohol or drugs on campus, they are faced with the possibility of academic and administrative sanctions from the university, according to Sac State’s alcohol beverage and drug policy.

The fear of receiving those sanctions could cause students to hesitate to call for help in what could be a life-threatening situation where medical treatment is required or in which the student comes forward about having a substance abuse problem, according to Donovan Bersamina, ASI director of natural sciences and mathematics.

If a medical amnesty policy is put in place by Sac State like ASI’s resolution calls for, students that come forward themselves seeking treatment for usage of a controlled substance would be absolved from academic and administrative sanctions against them.

By passing the resolution, ASI calls on the Alcohol Advisory Council and Student Affairs to begin amendments on the current policy.

ASI also passed a resolution in support of California Assembly Bill 1456 which would replace the current Cal Grant programs with new ones and expand who is eligible for entitlement grants.

Out of 340,000 students that apply for the competitive Cal Grants, only 41,000 new students receive it, according to data from the California Budget and Policy Center included in the ASI legislation.

“Having that large amount of students that are perfectly eligible in terms of the qualifications but just are not able to get it because they didn’t meet the entitlements grant requirements is definitely concerning,” ASI president Noah Marty said.

If AB 1456 is passed, the California Student Aid Commission estimates that nearly 280,000 additional students will be added to the Cal Grant program, including minorities, student parents, first-generation and DREAM Act students, according to ASI’s resolution.