Turns out the Snyder Cut wait was worth it 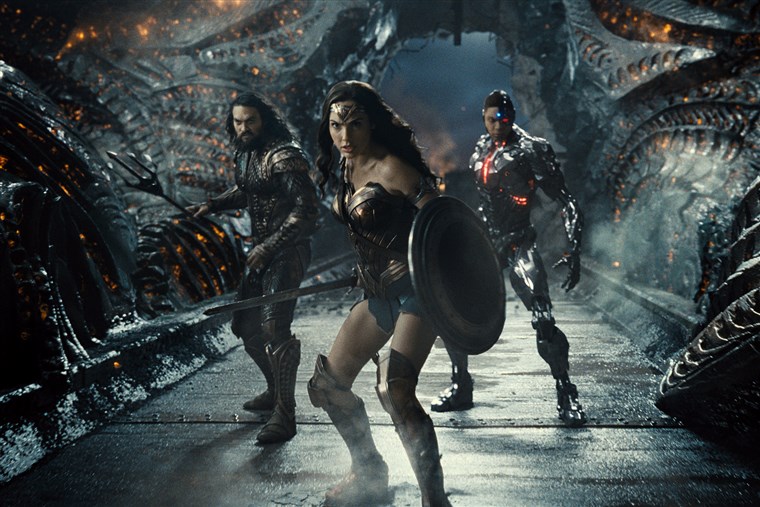 From left to right, Aquaman, played by Jason Momoa, Wonder Woman, played by Gal Gadot, and Cyborg, played by Ray Fisher, team up in director Zack Snyder's cut of "Justice League." It’s not just the stronger development that brings a lot of emotion in the Snyder Cut, it’s also the way the film explores the idea of finding hope through unity. Photo courtesy of HBO Max.

If you’ve been on the internet for the past few years, you’re more than likely to have seen the infamous #releasethesnydercut hashtag.

Zack Snyder left post-production of “Justice League” after the unfortunate passing of his daughter, and the production was taken over by Joss Whedon. Whedon was brought on, from what it seems like in the final version, to liven up the film and make it more humorous. What came as a result was a Frankenstein’s monster edit of a film that is constantly in conflict with itself and what tone and style it’s going into.

What came after was years of people online fighting to try to get his version, the so-called ‘Snyder Cut,’ released in some way. Much discussion can go into how a lot of toxicity came out of this, with people becoming too defensive over any sort of criticism thrown at the theatrical film. However, there was one hope out of all this, that a director will get to have their creative vision come to light away from any sort of corporate or studio interference.

Now, the time has come. “Zack Snyder’s Justice League,” the official title, is a little miracle. A big-budget studio superhero film that has one singular filmmaker’s fingerprints seen throughout it where every choice feels like one of a singular voice and not of executives.

This cut follows a fairly similar plot setup as the original “Justice League.” Bruce Wayne, played by Ben Affleck, and Diana Prince, played by Gal Gadot, come together after the loss of Superman, played by Henry Cavill, to put together a team of heroes to take down Steppenwolf, played by Ciarán Hinds, before he causes an apocalyptic event.

It’s pretty much night-and-day how different the two versions of the film are. From just the first few minutes, the new version sets a completely different tone. It’s undeniably Snyder. For some, Snyder’s love of the myth and grandiose of these characters and lore can come off as a bit too self-serious especially when some of the material can be kind of silly.

But that’s the appeal of Snyder for me. There’s something so genuine to Snyder’s approach to this material, even in his films “Man of Steel” and “Batman v Superman: Dawn of Justice” you see this. He puts a beating heart in his films, which also include brooding superheroes destroying a lot of property.

That heart carries into his version of “Justice League.” It has become more and more apparent how much of a hack job the theatrical version of the film was, having barely resembled Snyder’s original vision. One of the biggest things missing was the emotional backbone and pathos.

Actor Ray Fisher, who played Cyborg in the film, has been very vocal about his treatment during the reshoots and what was cut with his character, but in this version of the film we finally get to see what we missed originally. Fisher is the true heart and standout of this film. Not only is Fisher great in the role, but his relationship with his father and his own backstory bring so much more emotional weight so desperately missing from the Whedon cut.

Who knows what went through the head of Whedon and executives to cut out so much of these character developmental arcs and instead add a moment where The Flash, played by Ezra Miller, falls on Wonder Woman’s breasts?

Miller still has some jokes from the original version, and though the worst ones are gone, they themself get more screen time in a beneficial way. Miller honestly gets some of the best moments in the film, one of them being during the final climactic battle that serves not only as a visual delight, but a great moment character-wise. Again, the film has so many moments that make you wonder what executives were thinking when they decided to change all this.

However, it’s not just the stronger development that brings a lot of emotion here, it’s also the way the film explores the idea of finding hope through unity.

Even from “Man of Steel,” Snyder has focused a lot on finding hope and goodness in troubling and turbulent times. “Batman v Superman” can easily be seen as being about the conflicting response and action to large domestic attacks, 9/11 being the obvious example, and the pressure it can have on a figure of hope like Superman.

In “Justice League,” characters look for hope when it seems gone. It seems easy to point at a lot of media and just say, “it’s about grief,” but here it actually seems appropriate.

The death of Superman felt like a loss of goodness in the world, and Bruce Wayne’s plan to bring together a group to stop Steppenwolf is a way for him to believe the hope that Superman brought won’t stay dead.

Sure, writing all this down seems ridiculous. These are these super beings who can cause a sonic boom with a punch, but Snyder cares so deeply about them. Even as someone who prefers superhero content to be a bit more lighthearted and pulpy, I can’t help but buy into what Snyder does.

At a time when so much superhero content feels corporate, it feels so refreshing to have an artist’s voice come through in a way that has a genuine heart even when Willem DaFoe tells Aquaman to take up his mother’s trident. It’s silly stuff, but it’s got a beating heart behind it.

It also helps that Snyder crafts some great visuals. The 4:3 aspect ratio is great. It helps the emotional moments feel more intimate and makes the big and exciting shots look like a comic book frame come to life.

Much criticism has been thrown at Snyder for how much he seems to care more about how a shot looks more than anything else, but even if that were completely true, at least his films look better and more unique than most big-budget projects that come out now. There’s a sense of awe in his imagery that is so desperately missing nowadays. Imagine the pleasure it would be to see this on a big screen.

“Zack Snyder’s Justice League” is Snyder at his, well, most. For some, that will be a breaking point. There’s a lot of grandiose mythology, slo-mo, and the biggest of battles. Just about everything he wants is in here. It runs at four hours, with an epilogue that goes a little too long, and despite more development for Steppenwolf, it’s hard to truly have him break away from being just a giant CGI villain. But it’s the film’s flaws that work in its advantage.

Sure, this is far from the first time a director has been screwed over by a studio on the final version of their film, but it’s still kind of incredible something like this happened at this level.

Will it happen again? Probably not. Even if you don’t care for Snyder or even this film, you can’t help but appreciate and respect Snyder getting to fulfill his true vision.