OPINION: Ranking the top streaming services from best to worst

Nothing beats HBO Max (so far) 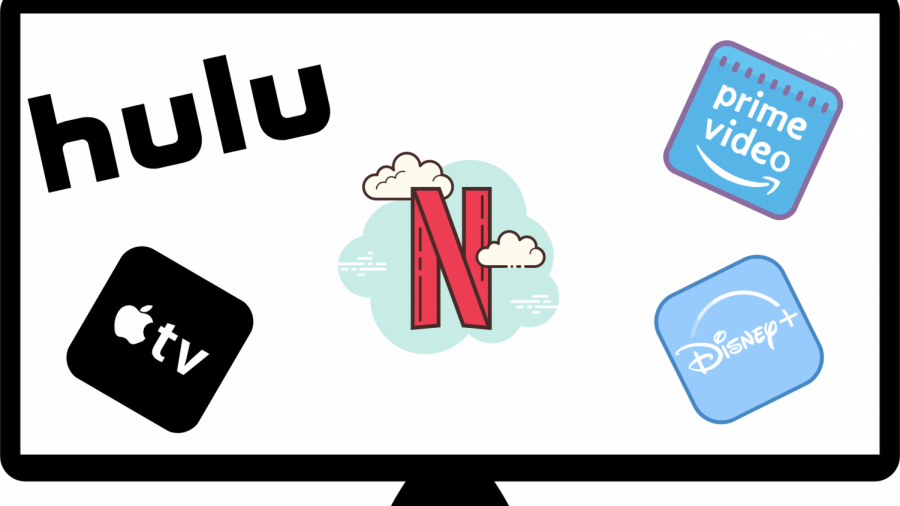 If you’re looking to open your wallet to spend some money on streaming services, copy editor Jordan Parker ranked the top services from best to worst. Graphic by Jordan Parker.

With the shift from live television to paid streaming services, you guys are probably wondering how to spend your money without going overboard. Below I’ve ranked the top streaming services available for you to subscribe to right now. I mean, you got to have something to do while staying in the house all day.
1.HBO Max ($14.99/month)
This is not even debatable. HBO Max is dominating the streaming market with award-winning shows like “Game of Thrones” and Friends while also being the home to recent mainstream movie releases such as “Wonder Woman: 1984,” “Judas and the Black Messiah,” “Tom and Jerry” and more.

I know what you’re thinking, the price tag is a little high. But as the old saying goes, “you get what you pay for,” and this streaming service definitely lives up to the cost. I would highly consider subscribing if you’re looking to watch some of the top upcoming movie releases like Zack Snyder’s “Justice League,” “Godzilla vs. Kong” and “Space Jam: A New Legacy” that will be exclusively on HBO Max on the same day they release in theatres. (Tip: spare yourself the COVID risk and watch it from the comfort of your home.)
2.Disney+ ($6.99/month)
Disney has done more than enough to earn the number two spot in my ranking. In fact, I’d say it’s closer to being number one than it is to dropping below second. With Disney+ I definitely feel as if you get what you pay for and then some.

You can relive your childhood nostalgia with popular hits such as “Finding Nemo,” “The Incredibles,” or all of those princess movies. You can even take advantage of the hit originals they’ve come out with such as “The Mandalorian,” “WandaVision,” and “The Imagineering Story.” And don’t forget, Disney+ is one of the few streaming services making movies that were scheduled to premiere in theatres now available for a cost of $19.99 to its subscribers. Who wouldn’t want to relive the Disney phase of their childhood?
3.Hulu ($5.99/month, $1.99/month with student discount)
This one was particularly hard because from now on, this list is definitely up for debate. I chose Hulu for this spot over Netflix simply because they are the most consistent while being half the price.

Hulu has a good collection of movies that are spread out over a variety of genres such as “Deadpool,” “Creed II,” “Antebellum,” “SuperBad,” “Parasite” and more. Meanwhile, you can catch shows like “The Bachelor,” “Modern Family” and “The Good Doctor” almost immediately after they air on TV. The only knock on Hulu is that it does have ads, but they’re relatively short and don’t interrupt the viewing rhythm that much.
4.Netflix ($8.99/month)
Netflix could easily be number one on this list, but the streaming service just doesn’t have the content it used to. This service heavily relied on shows like “The Office” and “Friends” to entice larger audiences to subscribe, but in recent months Netflix have given up those streaming rights and  now lost that appeal.

The Netflix originals they put out though are nothing short of amazing. I can watch “Outer Banks,” “Never Have I Ever,” “Sex Education,” “Stranger Things,” and “You” a thousand times over, but the problem is that those shows only come out once a year with like eight episodes, and once you’ve watched the season in one day, you’re left with nothing.

Would I pay $10 a month for something that doesn’t live up to its value 11 out of the 12 months of the year? No, but if you’re down to explore new things to watch without ads this is for you.
5.Paramount+ ($5.99/month, 25% discount for students)
Paramount+ has quality content for a cheap price with ads if you’re looking for childhood flashbacks. The streaming service literally has every Nickelodeon TV show from when I was a kid and even has a few iconic movies such as “The Godfather” and some of the “Indiana Jones” franchise. An added bonus is that you can watch your local CBS channel live for no extra cost. There’s really not much to criticize about this streaming service except that it lacks the appeal of the heavy hitters previously mentioned.
6.Amazon Prime Video ($12.99/month, $6.49/month with student discount)
Most of us have Amazon Prime Video because it comes included with Amazon subscriptions, but I literally don’t watch it unless “Thursday Night Football” is on or an anticipated movie (“Coming 2 America”) drops on the platform. To be honest, it’s bland and a waste of time because most of the good movies that are worth watching require to be purchased for an extra cost.
7.Peacock ($4.99/month)
Any streaming service that is the home of “The Office” is worth a try but fair warning that there’s not much here, in addition to the fact that you have to pay extra per month to access some of the top movies they have to offer, such as “Harry Potter” 4-7 and “Lucy.” If you’re here to watch “The Office” or “Modern Family,” go ahead and give it a try in the short-term, but this is not a service you can count on down the road until they show they’ll add more worthy content.

RELATED: OPINION: 2021 Sundance Film Festival films to be on the lookout for
8.Apple TV+ ($4.99/month, free if you have an Apple Music student subscription)
Like Apple News+, Apple TV+ is just a concept that doesn’t work for Apple. They came out with a couple of solid movies and shows like “Greyhound” featuring Tom Hanks and “Defending Jacob” with Chris Pratt, but the other originals aren’t anything that captivated my interest. The only thing the service aims to do is allow you to connect shows you watch on other streaming services to their app so that everything can be synced to one place. If you’re opening your wallet for a streaming service, make sure this is one of the first you avoid.