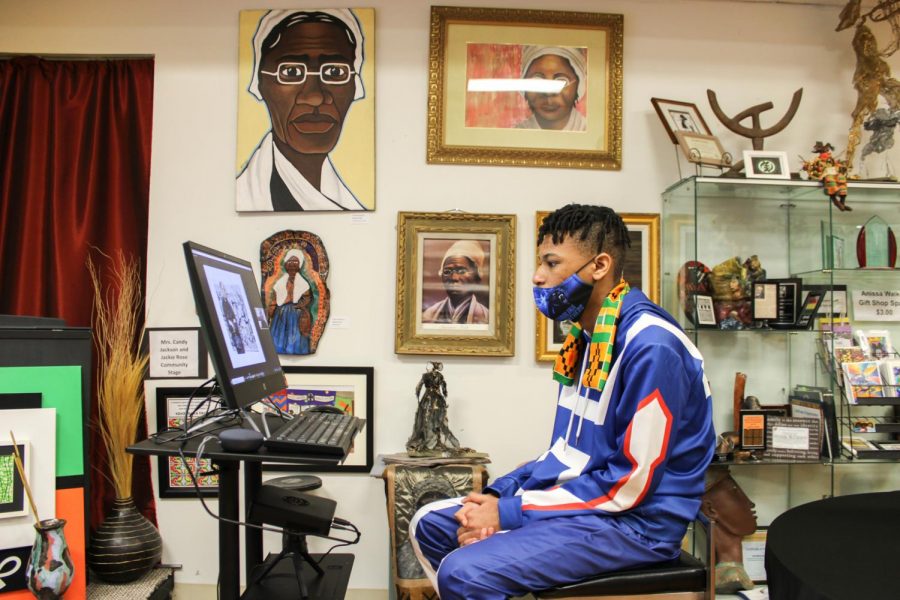 The Sojourner Truth African Heritage Museum officially re-opened Saturday at 2251 Florin Rd, honoring the late Sojourner Truth who was an African American woman and author who escaped slavery and fought for woman’s rights.

The museum, originally founded in 1996, gives the opportunity for young people to be docents and learn more about Black history. The opening event included an African marketplace which featured various small business vendors

Shonna McDaniels, the museum’s founder and executive director, said she had the vision to inspire and encourage the Black community. McDaniels said she believes Sojourner Truth possessed such a spirit.

“All the trials and tribulations she went through, she was inspired to get out and make a difference, fight for freedom, justice, and equality”, McDaniels said.

McDaniels, an artist for over 30 years, creates paintings that depict historical events and stories throughout Black history. She combines her artistic talents and history to support her vision of inspiring others in the Black community. Many of her paintings are on the wall of the museum along with some from other artists.

“My mother, a single mother, helped cultivate those talents in me, let me know I was important, that creative energy was important,” McDaniels said. “She always supported me. That just uplifted my spirit and I knew I wanted to give back to the community, especially young people, and I wanted to do it through the arts.”

The mayor of Sacramento, Darrell Steinberg, was also in attendance and shared his thoughts on what this museum means to the city.

“It’s an inspiring place to be and what I’m most excited about is that young people will be trained as docents,” Steinberg said.

A docent is someone that teaches or is a guide at places like a museum, art gallery or zoo. They are the people that stand next to an exhibit and explain the history behind it and what it depicts.

“To learn this history and then to teach that history, to many many others, I think Sac State, with its commitment to inclusion in diversity and social justice, would be a great partner,” Steinberg said. “I hope that many Sac State students come here to learn and then take what they’ve learned and teach others.”

Radio station KDEE 97.5 host Terry Miners was also in attendance and said he believes this museum will allow kids to learn more about their heritage.

“For once, kids can learn more about their heritage, where they come from,” Miners said. “I’m grateful for this museum being here so now we can teach our own kids, we can bring them to the museum and tell them about it.”

The opening of the museum gave the opportunity for a multitude of Black business owners to get their businesses circulated. One of them was Anya Jaleane, an author who writes children’s storybooks.

Jaleane said she has been telling stories her whole life and that she loves doing it, and that she feels empowered by the legacy of Sojourner Truth.

“It allows me to understand that anything we want to do is possible,” Jaleane said. “She persevered and she kept on moving, she defied the times, which said you can’t, and she proved them wrong, without my ancestor Sojourner Truth I wouldn’t be here.”

Jaleane said she believes connecting with who you are can push you through anything.

“I believe… if we connect with who we are, we all have the bad, we all have the ugly, but that good that has that light there,” Jaleane said. “We could do it, we just have to know other people came before us.”

Jimmy Stallworth, an artist who sells paintings, encouraged young people to cultivate their talents and start a business.

“You can be your own boss and have your own business as opposed to working for someone when you have talent and you put in the work,” Stallworth said. “You deserve to have your own stuff. I put in a lot of hard work and I feel like I’ve earned it.”

The museum already has young docents, middle or high school students, getting experience in what they will be doing moving forward, which is educating and being educated. One of these docents is high school sophomore Ani Cobian, who described working at the museum as a good educational opportunity for the youth.

“This entire museum is dedicated to educating the youth, especially Black youth,” Cobian said. “To let them know that they come from greatness and their entire history isn’t just slavery.”

Melissa James, a volunteer for the museum, said she sees the museum as filling a need for more culture in Sacramento.

“With the pandemic, the social unrest, and people looking at how much culture we need here in Sacramento, different investors in the city decided to pour into the youth in the area,” James said.

Another docent was eighth-grader Roman Patterson, who said the docentship is a good way to educate himself about Black history

“I think that it’s very important to have a museum and be able to work here to educate not only yourself but others,” Patterson said. “I think it’s good for the educational aspect, as a docent you’re learning things here too, you’re studying constantly.”